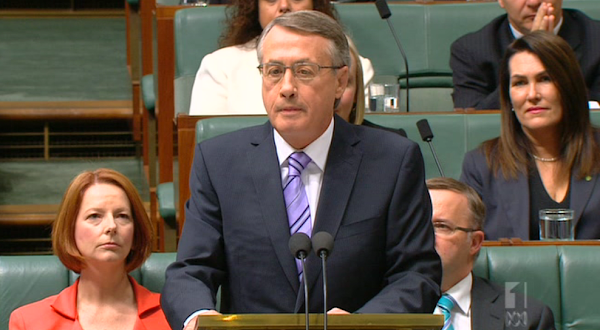 So what’s in this year’s budget for the people of Canberra?

Go nuts in the comments and we’ll post more here.

UPDATE1: WOOO! Rivers of Gold for the Centenary of Canberra!

The Government will provide a gift to the ACT Government to commemorate the Centenary of Canberra in 2013, at a cost of $62.0 million over four years.

A contribution will be provided for the redevelopment of Constitution Avenue. This will provide for practical and enduring benefits to the community of Canberra. It will complete the final component of the Parliamentary Triangle.

A further contribution will be provided for the development of the National Arboretum Canberra. This will assist in the completion of this nationally significant project in partnership with the ACT Government…

The Government will make a contribution of $6.0 million over three years to a joint national program of activities with the ACT Government to celebrate the Centenary of Canberra in 2013. These activities include cultural, sporting and civic awareness events and will engage communities across Australia to celebrate the centenary of the role of Canberra as the nation’s capital.

UPDATE2: As predicted Defence is going to have to trim the growth of its civilian workforce from a planned 1,655 to a mere 655 extra workers to 2014. The efficiency dividend is also going on there which will be a bit of a shock. The Navy however, is exempt from workforce reductions.

The Government will provide $6.1 million over four years to increase the base level funding for the High Court of Australia. This funding will assist the High Court in managing unavoidable increases in costs primarily relating to the High Court’s accommodation.

UPDATE4: And the Gestapo’s new headquarters have not been forgotten:

The Government will provide $30.6 million over four years to the Australian Security Intelligence Organisation (ASIO) towards increased operating costs for its new central office accommodation in Canberra. The balance of the operating costs will be met from within existing resources.

UPDATE5: Coordinated procurement across government agencies will be interesting:

The Government will introduce a coordinated procurement arrangement for its stationery and office supplies across Government agencies.

The purpose of the revised arrangement is to reduce whole of government procurement costs. Costs associated with the establishment and ongoing management of the arrangement will be recovered through an administration charge on agencies.

Under this arrangement, agencies will be able to retain savings in the order of $6.0 million per year for price and efficiency improvements. The arrangement is planned to commence from late 2011.

UPDATE6: The increased efficiency dividend has been done before but bears repeating:

The efficiency dividend applies to the operational funding of all Australian Government entities, except those that have been specifically exempted by Government. This measure will reduce the level of funding provided to public sector entities to ensure that benefits achieved through efficiency gains are returned to the Budget.

Savings from this measure will be redirected to support other Government priorities.

UPDATE7: There’s a bit more detail on what they’re doing on Constitution Avenue:

The Government will reduce the funding provision for the Nation Building Program 2 held in the Contingency Reserve by $42.0 million in 2014?15 in order to offset the cost of providing a grant to the Australian Capital Territory (ACT) Government for the redevelopment of Constitution Avenue.

The grant to the ACT Government is a gift to celebrate the Centenary of Canberra as the nation’s capital.

UPDATE8: There’s a bit more money for the Parliament:

The PBO will be established as a new entity and will provide Parliament with independent advice and policy analysis on the Budget, fiscal policy and the financial impacts of policy proposals.

The Government will redirect $0.5 million in 2013?14, provided to the Parliamentary Library to assist in development of policy by non?government parties, to the PBO to allow it to perform a similar function. This measure delivers on the Government’s commitment to establish a PBO as part of the Agreement for a Better Parliament: Parliamentary Reform.

UPDATE9: A bit of a win for the ombudsman:

The Government will provide $0.9 million over two years to the Office of the Commonwealth Ombudsman (OCO) to sustain its independent scrutiny of the Department of Immigration and Citizenship’s processing of refugee claims made by irregular maritime arrivals. The cost of this measure will be met from within the existing resources of the OCO.

UPDATE10: And more money for the archives:

As part of this measure, the Department of Finance and Deregulation will receive $0.3 million over four years from 2013/14 to fund Gateway reviews of the project. This will be fully offset by a reduction in funding for the NAA. The Government’s Gateway Review Process provides quality assurance to ensure that the objectives of major government projects are achieved.

The Government will provide $33.9 million over four years in additional resourcing to the Australian War Memorial. This will allow the Australian War Memorial to maintain its current level of activities. Additionally, this funding will provide supplementation for the anticipated increase in demand for research services, education programs and historical professional advice in the lead up to, and beyond, the Centenary of Anzac.

Further information can be found in the press release of 3 March 2011 issued by the Prime Minister.

UPDATE12: Setting parochialism aside on Crikey the highly reputed Alan Kohler explains in depth why this is an awful budget for Australia.

UPDATE13: Andrew Barr has tweeted that we’re getting $27mil to spend on roads.

So part of their Centenary gift to Canberra is make a contribution to the redevelopment of Constitution Avenue…………..a project they canned when in their first budget. Very big of them.

So does that mean they’re giving the money to the ACT Government to complete the project or to the NCA who were going to do it in the first place? I can’t see things going well if the ACT Gov runs the show, aside from the fact that Constitution Avenue is National Land

A great deal of this money is for national institutions and of no real benefit to the average Canberran outside the same benefit that would accrue to a resident of any other state or territory.

Additional funding for the NGA:

The afterparty and cleanup