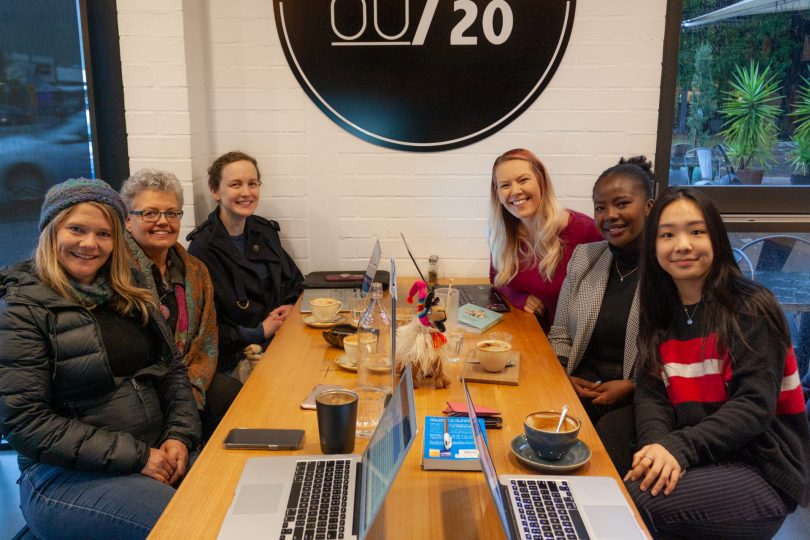 Members of the 5:30 Club at their usual spot at Eighty/Twenty Food in Braddon. Photo: Lottie Twyford.

What would you do with an extra hour in your day to focus on anything at all?

Getting up with sunrise might be a practice commonly associated with uber-successful billionaires, but Emily Davidson and the 5:30 Club are bringing a taste of the ‘hour of power’ to Canberra.

No matter how wet, cold or dark it might be outside, at least some of the crew will show up at the crack of dawn at Eighty/Twenty Food in Braddon to work on side projects, chat and bounce ideas off one another.

Some of the members are working on TikTok scripts, or a business plan for launching a creative hub for the BIPOC (black, Indigenous and people of colour) community in Canberra. Others use the time to study for their Master’s or read – things which get relegated to the back of minds once life and work gets busy.

Emily launched the 5:30 Club in Canberra after learning about the Sydney group in January this year.

READ ALSO: How growing up in a Canberra bakery led to a life of pie

“Some mornings I work on planning yoga classes that I teach to kids, or work on my children’s book that I’ve been meaning to write for years,” she says.

“But, look, I’ll be the first to admit there are other days when we just simply chat.”

Other members of the group attest to this.

Yanina Clifton, an emergency department doctor who uses her time to work on launching a YouTube poetry channel, says the ideas they bounce off one another are equally as important as everything else.

“If you work in a job where you see the same people again and again, it’s so great to be able to make new connections,” she says.

READ ALSO: Is Canberra accessible enough for people with dementia?

Emily is also keen to dispel the notion that we’re programmed to be either morning people or night people.

She found that working from home during COVID-19, in 2020, she began to lose a bit of her motivation and productivity.

But even when she decided to try getting up early, nothing worked – whether that was setting an alarm that couldn’t turn off until she walked 20 steps, putting her clothes for the morning in a pile, or even asking other people to wake her.

She soon found the alarm clock turned off equally as well if you walked 10 steps to the alarm and then the other 10 steps back to bed.

Likewise, the pile of clothes remained there as she snoozed, and when people asked her if she wanted to get up, she’d just say ‘no thanks’.

However, the 5:30 Club provides some accountability.

“I know that every morning there are these fabulous humans waiting for me to talk to, and that gets me there on time,” says Emily.

Yanina says she also experienced this firsthand during three weeks off following an exam period when she couldn’t find work.

“If I wasn’t getting up and coming here, the temptation is really just to stay in bed until 11:00 am or even midday,” she says. “Once you start scrolling, it’s easy to stay like that.”

There were a couple of false starts, including a day when Yanina just couldn’t get up.

“The next day, I was running late and I expected all of these super productive people to judge me,” she says. “But I decided to rock up anyway and see what it was all about. Turns out, no-one judged me.”

The Canberra 5:30 Club actually meets at 6:00 am every Monday, Tuesday and Wednesday morning at Eighty/Twenty Food in Braddon.

Everybody is welcome, and all you’ll need to do is look out for the girl with the pink llama on her table.

One Response to The 5:30 Club says, ‘Yes, you can become a morning person’
Filter
Show all comments
Showing only Website comments
Show only Facebook comments
Order
Newest to Oldest
Oldest to Newest

sounds utterly awful. i used to start work at 6am every morning for three years which meant getting out of bed at 5.45 to get to work. Never got used to it. now because oif kids rarely get to sleep past 6.30. still hate it.

each to their own though. – if you like getting up that early just do it and enjoy the peace and quiet. Just get enought sleep and don’t think that its a superior lifestyle to anyone else who likes to stay up late and sleep later

David Rose - 2 hours ago
We should get the band back together, cobber. But let me get some thermal underwear first... View
Dale Brittain - 2 hours ago
As the ex-Marketing Manager for the GMC400/Canberra 400, all I can say is that it will need lobbying to Canberra’s ultra-co... View
Rory McQuinn - 3 hours ago
Darin Mulcaster Darin, it would be a very quiet race.... View
News 29

Gary J Potts - 3 hours ago
Margaret Lay It was Gowrie Private Hotel, and was one of places for newly arrived APS staff. View
Gabriel Spacca - 4 hours ago
Steve Herczeg 6 months. But that’s because a) I was a glutton for punishment, and b) I’m antisocial and didn’t want to... View
Ashlee Betteridge - 4 hours ago
Oh so they are turning it into a quarantine facility? Which could then be reconverted back to privately operated student acco... View
News 9

chewy14 - 3 hours ago
Kenbehrens, Barr's statements and documented roadmap are fundamentally at odds with the National Plan. The Vaccination target... View
whatwik - 5 hours ago
And you are not the only one - the Riotact's poll is currently giving him 70% support. View
Oscar Mike - 5 hours ago
I just don’t trust Pfizer this is due to their decades long history of fraud and corruption and the fines to show it. View
News 18

Bethany Roberts - 4 hours ago
Selina Frances 😁 this is why you don’t plant tomatoes until after Melbourne Cup View
Sarah Young - 4 hours ago
It’s bloody awful, no picnics I this weather!! View
Community 10

TimboinOz - 6 hours ago
I don't need a cookbook to roast meat. You need a VERY HOT oven or 60CM Weber Charcoal BBQ and a meat thermometer, And then c... View
Opinion 57

HiddenDragon - 6 hours ago
Yes, this is inconvenient news for an ALP which has painted itself into a fiscal corner by selling out on negative gearing, c... View
show more show less
*Results are based on activity within last 7 days

A positive spin for Canberra’s homeless

@The_RiotACT @The_RiotACT
Was the ACT Government right to extend the lockdown? Is this the only way to keep Canberra safe, or is the community and business impact on us all just too hard? Have your say in this week's poll https://t.co/3TGwjQ2HEx (4 hours ago)

@The_RiotACT @The_RiotACT
There are plenty of glossy cookbooks full of gourmet feasts and gorgeous photos. But what are the tattered, stained and totally dependable, trustworthy #books on your #kitchen shelf? https://t.co/Fax9I0zG8P (5 hours ago)

@The_RiotACT @The_RiotACT
This beautiful four-bedroom family home is positioned in a prized and idyllic location directly opposite a park where you can watch the kangaroos graze and the kids play. And now, it's in full and spectacular bloom https://t.co/6bLJnoEiT1 (6 hours ago)