The blue boots handed in. 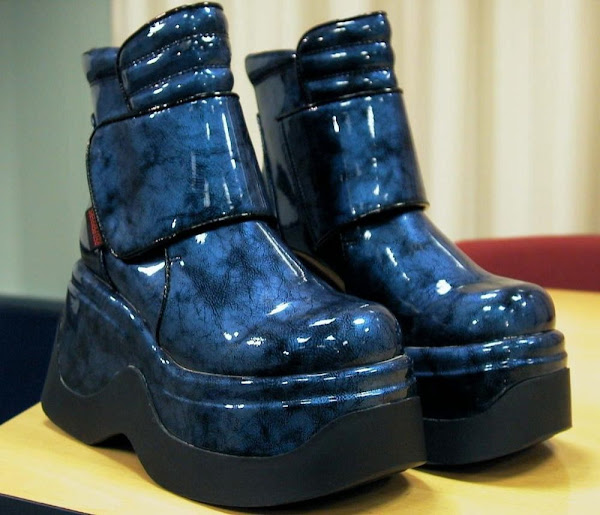 The electric blue boots which may be linked to the murder of Canberra woman Kathryn Grosvenor have been handed in to Police in Wagga Wagga at the weekend.

The boots — found in the Peter Street St. Vincent de Paul store — are similar to those worn by Kathryn Grosvenor, then 23, and last seen at her Nicholls home on Sunday, March 3, 2002.

Detective Superintendent Brett McCann, head of Criminal Investigations and original case officer for the Grosvenor murder said that while he remains cautious, the boots could steer the investigation — ongoing since 2002 — in a new direction.

“If these boots are found to be those of Kathryn Grosvenor, it will be a huge break in the case. They will be sent for forensics testing this week and we’ll hopefully know the outcome soon,” he said.

“We want to thank the women who immediately returned the boots once they heard we were looking for them. We continue to urge anyone with information — about the boots or the murder — to come forward.”

A reward of up to $250,000 will be paid at the discretion of the ACT Minister for Police and Emergency Services for information leading to the apprehension and subsequent conviction of the person(s) responsible for the murder of Kathryn Grosvenor.

An appropriate indemnity from prosecution will be considered for any accomplice, not being the person who actually committed the crime, who first provides the information. The grant of any such indemnity is at the discretion of the ACT Director of Public Prosecutions.

ACT Policing is yet to identify the person(s) who dropped off the boots at the St Vincent de Paul store in the first instance.

Police continue to urge anyone with information about the Kathryn Grosvenor murder, or the electric blue platform boots, to contact Crime Stoppers on 1800 333 000 or via the Crime Stoppers website on www.act.crimestoppers.com.au. Information can be provided anonymously.

4 Responses to The blue boots handed in.
Filter
Showing only Website comments

Thank you jessieduck. It’s nice to know that someone doesn’t think this is a joke or a story for their personal entertainment. Unfortunately, even though they might catch the offenders one day, I’m never going to be able to think of it as a win.

Just a side note – were the owners of these boots past and present considering walking on the moon at some stage???

Really hope this is the break-through that Kathryn’s friends and family have been waiting for. It’s been a long slog but maybe the good guys will win this one.

Ooh, I can’t wait for the outcome of the forensic testing! I hope it is a breakthrough. If they are “the” boots and the person handing them in was involved in the murder in some way, they’ll be trembling in their boots right now. :p

And I accidentally read “boots of murder” in that press release. lol That could be the title of the book.

Alex Warne - 4 hours ago
Jarrod Sean Id suggest looking into the Spire Project. There’s lots of money being spent upgrading Canberra Hospital View
Juliane Samara - 5 hours ago
Jarrod Sean if they waited until the hospital was over run, and then decided to build the temp hospital, lives would have bee... View
Jane Stubbs - 8 hours ago
Money well spent.... View
Business 16

Tom Adam - 5 hours ago
*Riot-Act Rubs Hands *Canberra cries at the loss of the last printed journalism available as all other magazines and newslett... View
HiddenDragon - 8 hours ago
"If the printing presses are mothballed, the rationale for maintaining a large commercial building in a central location woul... View
Lindsay Noone - 10 hours ago
Julia can you get some goss? View
What's On 7

Maria Greene - 8 hours ago
Frank Valzano yeah but how would Brendan or pollies benefit? View
Frank Valzano - 9 hours ago
Use the money to provide mental health support for current and former soldiers suffering from PTSD.😡 View
Lifestyle 2

Liz Widdicombe - 9 hours ago
If these guys were on during the week I would go back to listening to 104.7 for sure. View
Barbara Mobbs - 10 hours ago
Love you guys! All about the Community we live in 😊 View
Food & Wine 21

Sue Thurley - 13 hours ago
Was Martin Smith in that team? View
News 19

Marea Fatseas - 16 hours ago
Lynn Stape we should be looking at how to avoid organics going in with all other waste in the red lid bins in the first place... View
show more show less
*Results are based on activity within last 7 days

@The_RiotACT @The_RiotACT
Looking for a new pet? This cute little guinea pig called Boris is at @rspcaact waiting for the perfect owner https://t.co/BxdD2QOjpl (7 hours ago)

@The_RiotACT @The_RiotACT
This 1950s weatherboard cottage in Ainslie has been tastefully extended & renovated and the character-filled home will go to auction later this month https://t.co/sWB6szyN5J (8 hours ago)

@The_RiotACT @The_RiotACT
Chief Minister Andrew Barr has called for an overhaul of the Commonwealth's Disaster Recovery Funding Arrangements which he says are no longer adequate https://t.co/jOpAlSGfaE (9 hours ago)