Melbourne used to be have the reputation as the coffee queen of Australia, if not the world. I mean, if Starbucks can’t even compete in Melbourne because the coffee is so good, then that tells you something about the competition.  But Canberra is now wrestling to take on that crown.  Yes, Canberra.  We now have a number of international award winning cafes, brands and baristas.  And we are apparently fickle about our loyalty to cafes, demanding only the best. 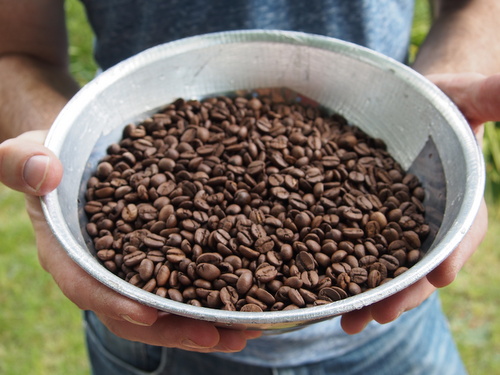 And now there is one more entrant vying for attention by fussy Canberra caffeine addicts.

Meet Dave Steel. He can show you his face (and if you visit, pause to enjoy the beautiful portrait of his face painted from coffee by one of his talented daughters). And he can certainly show you how passionate he is about coffee. 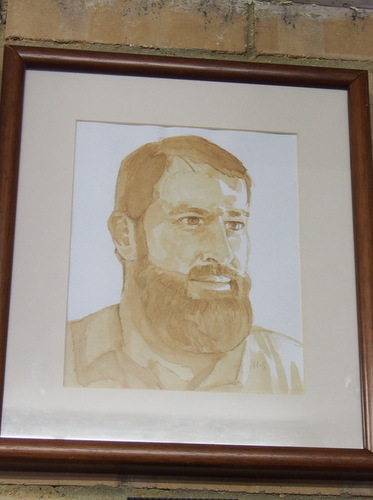 A picture painted in coffee by Dave’s daughter Hayley

Dave really, really loves coffee. He loves it so much so that for over ten years he would make bulk purchases of green coffee beans from a company in the Blue Mountains. He would then roast the beans in his backyard in a coffee roaster fashioned from a breadmaker and a heat gun.

Then last year, Dave decided to buy the business (Ministry Grounds) and move it to Canberra. He still sometimes roasts beans in his breadmaker (well, he did just to show me), but these days he is more likely to roast them in his shiny coffee roaster.  In his garage.

Visiting Dave’s garage is a feast for the senses. They say that coffee – along with bacon – is one of the most memorable fragrances in the world. It conjures up all sorts of emotions. For many, it is a spiritual experience. And it certainly is for Dave.

When not roasting coffee, Dave is a pastor with Crossroads Christian Church. So it was rather a leap of faith to leave his calling (or at least go part time) to pursue his other love. The name of the business (Ministry Grounds) was inherited with the business, perhaps another sign of his calling. And several of the coffee blends have Biblical names: Nehemiah and Josiah coffee blends (one of which was also named after the former owner’s grandson). I especially liked the mellow Josiah blend, which was a good mix of flavours. (BTW, if you like me are unable to drink a lot of caffeine, Dave sells a Swiss style decaffeinated blend that he grudgingly admits actually tastes like coffee when fresh. The issue with many decaf coffees is that the water leaching to remove the caffeine also removes the flavour. Dave recommends drinking all his coffees at a slightly off boil temperature of 92 to 95 degrees).

Dave also offers a selection of single origin coffees. His menu changes depending on what is in stock. At the time of writing he had four roasted varieties available from Ethiopia, El Salvador, Colombia and Kenya. He also stocks several types of green coffee beans that you can buy in bulk and roast yourself, as Dave used to do. 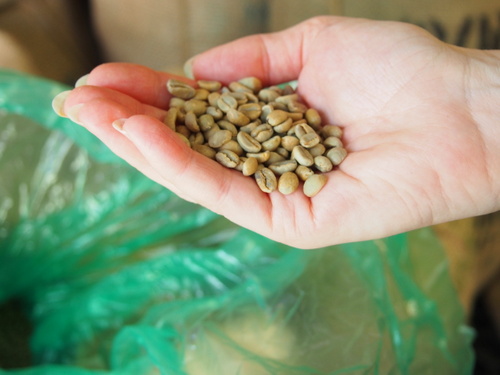 Ministry Grounds coffee beans are sold online in 250g, 500g, or 1kg packs and are roasted freshly. Dave will not sell coffee that has been roasted more than a week beforehand, and the date of roasting is handwritten on the pack. He can grind coffee for you, but being a purist he recommends whole beans (he also sells a range of coffee grinders and coffee brewing implements). In line with his values, he stocks many types of ethically produced coffees including Rainforest Alliance, Utz Certified and coffees certified by local bodies at origin. But above all, he tries to buy high quality, speciality grade coffee from sources as close to the grower as possible. This ensures that he is buying from farmers who genuinely want to grow some of the best coffees in the world. 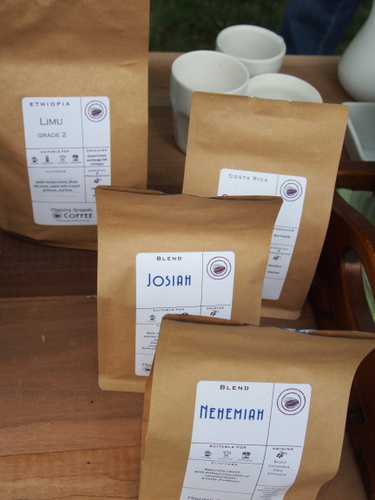 “He would then roast the beans in his backyard in a coffee roaster fashioned from a breadmaker and a heat gun.” Love it.

Looks like Dave’s daughter is a talented artist too. That’s a great portrait.

John Wilson - 9 minutes ago
The one place with soul, in a bleak 1980's landscape. Such a great loss for the inhabitants of culturally deprived Weston Cre... View
Allira Middlebrook - 34 minutes ago
Such a shame, it was wonderful View
Fiona Furze - 45 minutes ago
What a loss for Weston and the rest of Canberra.@ View
News 34

Robyn Holder - 30 minutes ago
Hey whingers, there is money being spent all over Canberra at the moment. And if it's needed more in older more used places,... View
Gregg Heldon - 2 hours ago
Philip Leaf one building does not uplift a town centre that is in danger of dying and has been for a number of years. They ma... View
Greg West - 3 hours ago
Wasting more money on the city wasteland, fix the roads. Get rid of the bike lanes. View
News 3

Jay Gurney - 2 hours ago
Karley good news View
HiddenDragon - 3 hours ago
"The ACT Government has also flagged further stimulus and support for community and social housing" Good - when Jobkeeper and... View
Sarelle Woodward - 3 hours ago
Is there such a thing in the ACT? View
News 7

Peter Norton - 3 hours ago
Parking at CC was bad for years before new suburbs made it worse. This was proposed years ago and action is too slow. This is... View
Mat Barber - 5 hours ago
If they're saying they want it and then complain when they get it then just cancel the project and refer everyone back to the... View
Jacqui Donegan - 5 hours ago
It’s a grab-and-go shopping centre (not a day out) - who would be prepared to park that far away?! View
News 27

Chelle Belle - 7 hours ago
I agree the vacant hospital should be used for addressing low to medium mental health issues. Problem is getting the psychiat... View
News 49

Julie Macklin - 10 hours ago
I do agree that people who are driving should not be on the phone. I refuse to answer a phone when driving. But stationary at... View
show more show less
*Results are based on activity within last 7 days

COVID-19 restrictions are easing just enough for some of our favourite Canberra businesses to re-open this weekend, with appropriate social...
News 3

A Geocon proposal for an eight-storey mixed-use development in Kingston is out of step with the character of the area...
News 7

A Geocon proposal for an eight-storey mixed-use development in Kingston is out of step with the character of the area...
News 34

@The_RiotACT @The_RiotACT
Play an instrument? It's time for local musicians to step up and join Canberra's own Virtual Orchestra, a joint digital project from the ANU and the @CBR_Symphony in this time of COVID-19 restriction https://t.co/DuCnmLXxn5 (47 minutes ago)

@The_RiotACT @The_RiotACT
Along with fun workshops, interesting events & delicious dining, there are plenty of opportunities for self-education & challenging conversations in the coming week https://t.co/SC2OwUwE6G (1 hour ago)

@The_RiotACT @The_RiotACT
Police have released photos of three young men involved in a dangerous vehicle burnout recently, and are calling for witnesses https://t.co/aHs03hxBN1 (3 hours ago)