The Canberra gets named (officially) 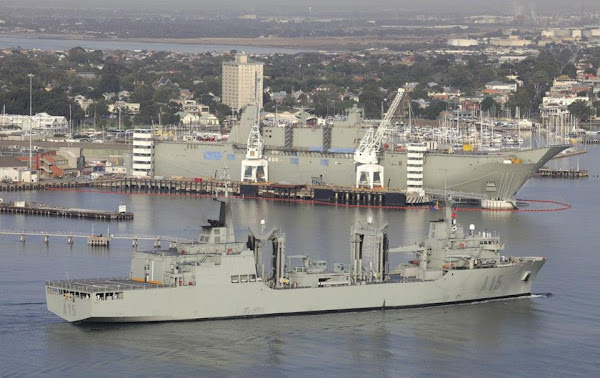 The Herald Sun has word that we’ve marked the Fall of Singapore by naming the HMAS Canberra (which in its way marks the rebirth of Australian strategic independence).

Speaking at a ceremony in Melbourne to name the first of two LHDs on Friday, Ms Gillard noted it was the 71st anniversary of the surrender of Singapore.

That event sent a clear message for other island nations – like Australia – that “the best defence is self defence,” she said.

The new vessel is named Canberra, and her sister ship will be called Adelaide.

At 27,500 tonnes, these will be the largest ships ever to serve in the Australian navy – even bigger than Australia’s last aircraft carrier HMAS Melbourne – and were acquired at a cost of more than $2 billion.

The above picture was posted to facebook by the RAN:

The Cantabria, it should be noted, has been kindly lent to us by the Spanish government and handily solves the fuel and stores issues which would stop the Canberra being operated as an aircraft carrier.

Are you a real Canberran? It’s: “There’s not enough free car parking 10m from the entrance.”

“which in its way marks the rebirth of Australian strategic independence”

I’ll look forward to that.

She’s been named, but not commissioned. Until commissioned, her name is NUSHIP Canberra, as noted on the RAN Facebook page.

She looks lovely there (actually seems to brighten the place up a bit), but I’m not so sure she’ll fit in with the décor on LBG…

A small correction is in order. The acronym “HMAS” stands for Her Majesty’s Australian Ship. So this vessel may be referred to as “HMAS Canberra”, or more simply and familiarly as “The Canberra”, but never ever as “The HMAS Canberra”. The latter usage makes is incorrect.

Apropos of nothing much at all, I was told a story many years ago by a crewmember of the Sydney. She was docked in Pearl Harbour and as a tour boat went past the tour guide told his passengers “…and this green ship over here is the USS Haymas Sydney…” Chortle. 🙂

the boat people will be impressed when the Canberra shows up

If there is one place for pomp and ceremony, it’s the military.
Why couldn’t they wait a few days until the 100th anniversary of Canberra for the naming ceremony instead of doing it on the 71st anniversary of what was a hideous defeat.

Joshua Grech - 9 hours ago
David Rees Oh, interesting. There are others. Thales etc View
David Rees - 9 hours ago
I think you will find it did, has got out of trains now. View
astro2 - 9 hours ago
Doesn't need to be high speed, just higher speed would do. The most recent proposal featured very little changes beyond a bit... View
Community 8

Justin Sev - 9 hours ago
Is that the same Tom Morrison who played junior footy for the Rams ? View
Community 5

chewy14 - 10 hours ago
Perhaps you can link to actual scientific research or investigations showing this particular proposal will cause health issue... View
Capital Retro - 13 hours ago
The residents of Conder and suburbs to the south should worry about this proposal as the standing inversion layer that plague... View
News 9

chewy14 - 10 hours ago
BJ, There are still peak hour buses from Tuggeranong to the city using the Parkway. The problem with this road and the future... View
JC - 10 hours ago
The parkway does cope now. Sure it gets congested but roads are designed for an acceptable level of congestion. What is accep... View
bj_ACT - 12 hours ago
Who would have thought that taking buses off the Tuggeranong Parkway and also making peoples peak hour bus commute from Tugge... View
Courts & Crime 2

A bus named Sue: Canberra to get first women’s sleepbus