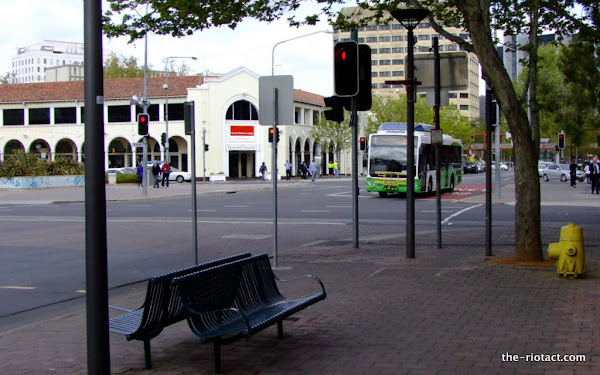 As a regular cyclist through Civic (although for those keeping score at home let it be noted that I do once again own a car) I do wonder from time to time why we need quite so many poles getting in the way.

The corner of Northbourne and Alinga is probably the worst for a busy intersection trying to deal with large numbers of pedestrians, cyclists and cars. Yet amidst all this are six poles, a park bench, and a fire hydrant. One of the poles appears to serve no purpose at all!

Is it too much to ask for just a bit of consolidation in our urban infrastructure? 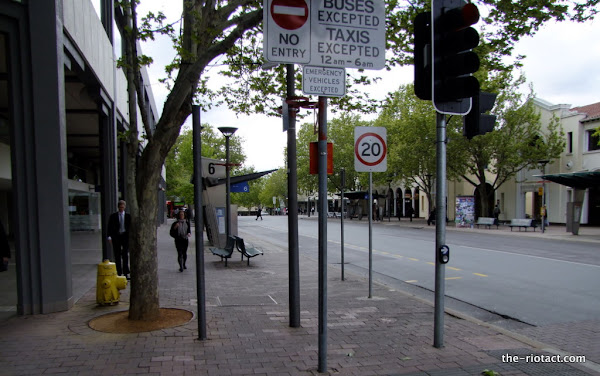 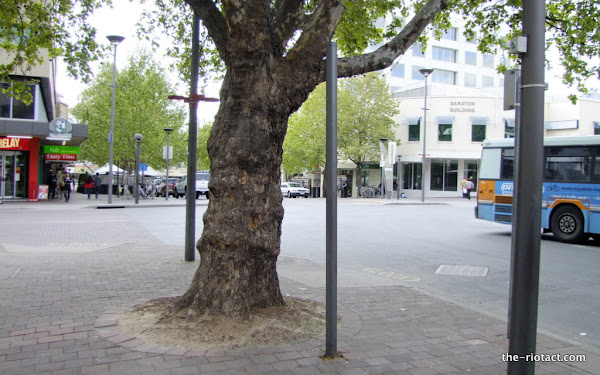 At least in Wee Jasper they just use the same poles each time they come up with another warning sign.

umm a quick google search came up with the following

Legal authority to enable cyclists to use all footpaths was provided in a 1974 amendment of the ACT Traffic Act 1937 (2), which stated that:

“A person shall not – …drive, ride or wheel a vehicle, other than a bicycle… on a footpath”

Since the enactment of the above legislation, there has been only one instance where it has been deemed appropriate to install “No Bicycles” signs on footpaths. This was where the city administration wished to discourage bicycles within the congested City bus interchange, where the bus operators considered cyclists to be a safety hazard to buses moving through the interchange.

In addition to this blanket approval to cycle on footpaths, the 1974 legislation went further in providing for the gazettal of “Bicycle Paths”. These are paths restricted to use by bicycle riders only. All other persons, whether a pedestrian, vehicle driver or a person leading an animal were to be excluded. In practice however, the “Bicycle Path” legislation proved unworkable in terms of definition and enforcement, and the Section was repealed in 1990.

The present position in the ACT is therefore that all footpaths are available for joint use by pedestrians and cyclists.

The spare looks a bit like the one in the background of the bottom pic that has a camera on it – maybe it got knocked off one Saturday night? I am pretty sure the hydrant pre-dates the tree though.

As a regular driver through Civic, I do wonder from time to time why we need quite so many cyclists getting in the way…..

Get a car you crazy cyclist!!!

I’m trying really hard to not mention the war.

Ha yes my first thought was the war too

I’m trying really hard to not mention the war.

Ignorance is the actgovco noobs who approved the erection of said signage. The idiocy is us commenting on them and not removing them.

Why not? Watch what you’re doing and you’ll be fine, it’s not as though the buses are going more than 30 or so anyway.

I’d have thought you of all people would have plenty of experience riding in the bus interchange, given where your day job is located.

It would thin the herd.

That can only be a good thing

There are plenty of things that are legal that aren’t a good idea. If there are lots of poles, that’s probably a good place to ride on the road to get around.

Though there needs to be some proper bike corridors worked out in Civic, e.g. along Alinga St where road gets so narrow (for no apparent reason) that cyclists need to go right out into the middle of the road and risk being hit by a bus or car

Yes, bicycles are so “forbidden” the government put racks on the front of the bus to carry them in.

I thought they were scoops, to help clean up the roads – no wonder they fail me all the time on that part of the bus driver test.

Yes, bicycles are so “forbidden” the government put racks on the front of the bus to carry them in.

…all those pics are in the bus interchange, where bikes are forbidden.

Says it all…. but then again cyclists have their own laws now don’t they.

Cassie Grening - 15 minutes ago
Jen Maher can I have your autograph? View
Jennifer Hartcher - 11 hours ago
Tiffany Tanaskovic its already been spray painted tags on the new concrete. Need the shops open to deter people vandalising View
Tiffany Tanaskovic - 12 hours ago
Jennifer Hartcher I think the park at the Richardson shops will be ruined in no time sadly. 😢 View
Opinion 50

HiddenDragon - 10 hours ago
An overly literal (or, perhaps selectively so) approach to the application of the criteria for different speed zones might ha... View
David Brown - 12 hours ago
Clinton Berry I don’t know of any accidents in the last decade. View
David Brown - 12 hours ago
Toni Isaacson It simply adds more proof to the fact that road fines are simply an easy tax. Highway Patrolmen are tax collect... View
Lifestyle 1

Kathy Schneider - 11 hours ago
One of the highlights of the year! View
Sport 8

Phil Small - 11 hours ago
One of the best and nicest guys ever.....cheering you on GT. View
Cheryl Thuillier - 12 hours ago
Give me a message. I can help. Eat cucumber skin every day. Message me. I can tell you a story that save a friend's life. View
Marcia Bowden - 13 hours ago
Glen, sending positive thoughts x... View
News 12

Robert Hawes - 14 hours ago
Robert Knight Agreed. It would be hard to make a good bus route though the suburb as it is isolated. Would be better if they... View
Robert Knight - 18 hours ago
You cannot plonk in a greenfield suburb, built all at once, with no dedicated public transport corridors, an inbuilt car depe... View
News 16

Jenny McInnes - 14 hours ago
Angelo Turcin Dr Encrico Taglietti designed the cinema and he won the Australian Arctetects Gold medal in 2007. Clearly you a... View
Trish Roberts - 15 hours ago
Thanks, Andrew! You would certainly know. View
Andrew Pike - 15 hours ago
ANDREI RUBLEV looked great on the giant screen but wasn't the last film. The very last film shown was a reprise of the very f... View
Lifestyle 1

Lynn Stape - 15 hours ago
so great. I was not aware they had a shop. Some really nice things for sale. I love the postcard for Gungahlin with the light... View
Community 41

John Hamilton - 16 hours ago
They have been paid for by rates and other taxes. So they have paid. View
Lynn Stape - 19 hours ago
John Hamilton sigh if you say so..look mate if you want the precious cyclists to be hated more then by all means make all the... View
What's On 7

It's a hoarder's dream and a librarian's nightmare. Thousands upon thousands of books in boxes that either need to be...
Breaking 0

A passenger on the repatriation flight that arrived in Canberra on Thursday has tested positive for COVID-19, ACT Health said...
News 13

@The_RiotACT @The_RiotACT
In this week’s newsletter we’re talking COVID, car crashes, Canberra’s newest suburb + one of the finest properties you ever will see https://t.co/utq8zjI7Mq (9 hours ago)

@The_RiotACT @The_RiotACT
In a year of endless disasters, cartoonists say 2020 has been a Dog's Breakfast. MoAD's Behind the Lines exhibition makes sense of it all https://t.co/Fb1EbHEs4B (10 hours ago)

@The_RiotACT @The_RiotACT
ANU researchers have returned from a four-week mission to Macquarie Island to learn more about Earth’s most violent underwater earthquakes https://t.co/zaEAeAj9kH (12 hours ago)