The curious Dr Ahlefeldt named ACT Scientist of the Year 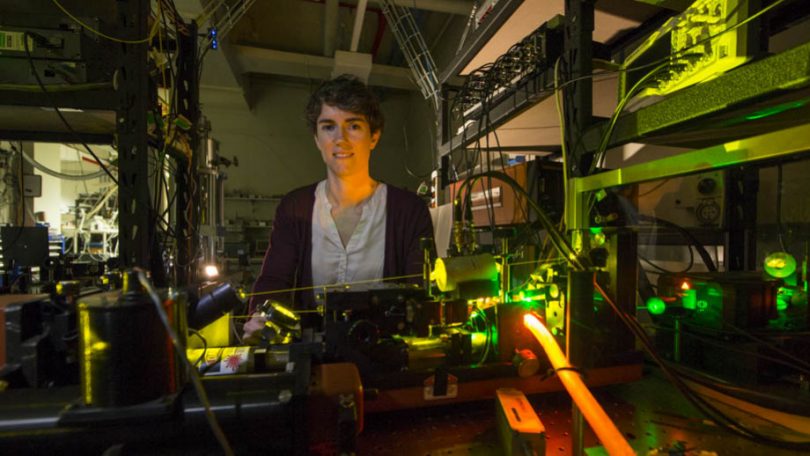 Dr Rose Ahlefeldt in her lab at the ANU Research School of Physics and Engineering. Photo: ANU.

A curiosity about how the world worked has led Rose Ahlefeldt into the rarified world of quantum physics and the future of computing.

The Australian National University physicist is this year’s ACT Scientist of the Year, an award that celebrates Canberra’s emerging scientists and aims to inspire young people to consider a career in STEM fields.

Dr Ahlefeldt said that as a child she liked building things and spent a lot of time in her father’s garage making stuff.

“These are actually the skills I use today, building things and thinking creatively about the world,” she said.

Dr Ahlefeldt uses novel rare-earth crystals for applications in quantum information, including high-data storage density. Her work to build better quantum memories will be needed in the future for quantum computers and, eventually, the quantum internet.

“I like working on quantum memories because I get to take that fundamental understanding of materials and actually apply it to a real work problem and possibly apply it to a new technology we could use in the future,” she said.

She believes the secure networks, artificial intelligence and new drugs of the future could all find their origins in a crystal.

Her research is trying to find the right materials to build the quantum memories needed for quantum computers, which could solve some of the world’s “impossible” problems.

“The problem is we fundamentally don’t have the materials at the moment that can reach the sort of data storage densities we need for quantum computers, so my work is to study new materials to find out how we’re going to get there,” Dr Ahlefeldt said.

“My work is using crystals containing rare earth ions to store quantum information, which starts off as pulses of light. We transfer the information from the light to the atoms in the crystal, creating a quantum memory.

“I am trying to understand how the atoms in the crystals interact with the light, so I can choose the right materials to make better quantum memories.

“One day we’re going to build quantum computers that can solve problems that are impossible for our current computers. Researchers have already identified many uses for these computers, including enhancing artificial intelligence, establishing secure communications and eventually building a quantum internet.”

Dr Ahlefeldt said a career in science really started with curiosity about some aspect of the world.

“So the main piece of advice I’d give to young people interested in science is just to do what you are interested in and follow the things you find exciting and let that take you into whatever science career you can find,” she said.

“Rose is creating the building blocks that will help enable a quantum computer future. It’s fantastic to see her fundamental and very important work recognised in this way,” Professor Schmidt said.

“ANU and the ACT are at the forefront of advances in the quantum world, partnering with our colleagues across Australia as world leaders in technologies that are revolutionising the digital world.”

Dr Ahlefeldt, a research fellow at the ANU Research School of Physics and Engineering, joins past recipients Dr Kai Xun Chan (2017), Dr Ceridwen Fraser (2016) and Dr Colin Jackson (2015) who each spent their 12 months as ACT Scientist of the Year inspiring young people to consider STEM careers and promoting the ACT as a centre of excellence for science and research.

The annual ACT Scientist of the Year Award recognises the achievements of an ‘up and coming’ scientist with significant potential to continue to achieve in their chosen field of research.

Jake Annetts - 2 minutes ago
Bundy Pados ah typical of me to miss the joke. Sorry. But rest assured there are many womby helpers. I know a few who raise a... View
John Coleman - 2 hours ago
Ian McTaggart conversely, we could see something in the fact Andrew Wall, who had no signs out, has likely lost his seat to T... View
John Coleman - 3 hours ago
The hate is hilarious. They're roadside signs that pop up every 4 years, a reminder we live in a democracy and it's that time... View
ACT Election 26

Cheryl Collins - 19 minutes ago
wrong... its about serving your constituents and community. Or rather thats what you are SUPPOSED to do. Its not about you wi... View
Narelle Ford - 1 hour ago
Natasha Van Oudheusden Dreadful chief minister. View
Narelle Ford - 1 hour ago
Margaret Freemantle Oh I was. Her debacle with blowing up Canberra hospital lead to a death. View
News 13

Rik MP - 2 hours ago
Leanne thats excessive View
chewy14 - 8 hours ago
JC, The reliability of travel times has little to do with light rail itself and everything to do with a dedicated route with... View
Capital Retro - 8 hours ago
I concede that the 25 minutes leg should have been 15 minutes - all figures look the same early morning, but the report said... View
Food & Wine 48

Capital Retro - 8 hours ago
ABC? Another Barr Catastrophe... View
Nick Anderson - 11 hours ago
It was ABC for me. Anyone But Coe... View
ACT Election 23

chewy14 - 11 hours ago
I don't think they remotely need a "unicorn" to win in the ACT, they just need a sensible offering made by more politically c... View
ACT Election 15

Nick Anderson - 11 hours ago
About time. The chief minister and treasurer shouldn’t be the same person regardless. View
show more show less
*Results are based on activity within last 7 days

A government speed detection van on Canberra Avenue has been shot at in an apparent drive-by attack, police said. An...
Food & Wine 48

ACT Chief Minister Andrew Barr plans to give up the powerful Treasury portfolio at some point during the next term...

Make no mistake, the ACT election result is a disaster for the Canberra Liberals, and one that has to be...
Food & Wine 48

19 October: 11.00 am  What just happened in the ACT election? It’s the morning after and Genevieve Jacobs is with Professor...
ACT Election 26

@The_RiotACT @The_RiotACT
Whether it features big festivals, intimate sit-down affairs, or live streamed events, CBR’s musical future is up in the air & ready to be shaped. Read more in our latest #GigGuide https://t.co/qoB8BtF5NB (1 hour ago)

@The_RiotACT @The_RiotACT
The annual Aussie salute is in full swing around the region, with flies & mozzies out in force https://t.co/cZCssHboMq (2 hours ago)