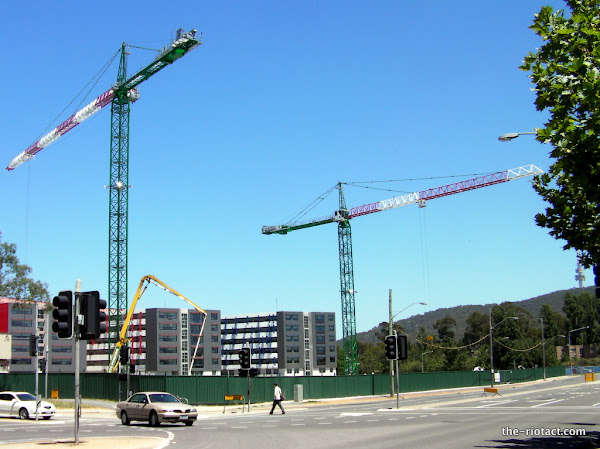 The ABC reports that the construction site at the corner of Marcus Clarke and Barry Drive has had to be shut down after a second nasty accident:

a 29-year-old plumber working at the site of new Australian National University accommodation at Acton broke his pelvis when part of the wall of a trench collapsed on him.

Last month another worker was injured when he fell into the same trench.

The site is shut down while a safety audit is being completed.

Incidentally does anyone know why the crane work lights are left on during the day?

Im glad they knocked this building down. That carpark and chipbark mound that now sits exactly where McGregor Hall used to, was sure worth the loss of a much loved community building with heritage.

Okay, which one of you CMC members cursed the site?

Bob Jones - 49 minutes ago
Deb Wheare And Lynne Meredith... I've heard because of the more right someone who identifys as being an Aboriginal or Torres... View
Kev Martin - 11 hours ago
I find If you stop breaking the law, you don't get locked up View
Deb Wheare - 22 hours ago
Jacob Torresan face palm View
Property 14