The drain cats are doing OK 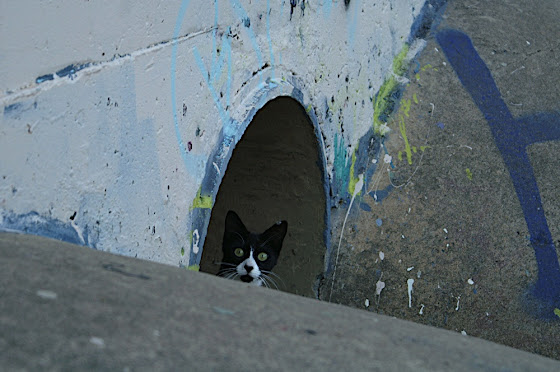 Woden’s drain cats have occupied a lot of attention.

Fortunately FS from Urban Adventure has been able to report that despite recent rains the cats have proven more resilient than Cotter River bridges.

I have alerted my favourite South Korean restaurant.

I popped in about 2pm and fed them some (plain brand) kitty food. I counted 9, 7 healthy adults, and two tiny little kittens that would be only a month old I suspect. The little kittens were reasonably curious but their mumma cat kept them out of harms way. Mumma cat also has another kitten that I guess is some where between 6 and 10 months old.

9 healthy adult ones there last night. Rode past again today and obviously slowed too much for one’s liking as he did the bolt.

Numbers were high as ever during my lunch time constitutional.

So do we need to send Captain RAAF out there with his F88?

Negative, Arsecat. too much stuffing around.

Five will get you fifty the cat population there will miraculously shrink in the coming weeks/months….

OP, thanks for the photo’s, makes it very easy to narrow down.

On the first day God said, “Let there be light! blah blah blah”.

On the sixth day, God created cats, by accident. He then created Man to sort that problem out but with a cruel twist of irony, he created Woman and Mans plans were, to put it lightly… stuffed.

Did the photographer spray paint the word “MEOW” above the drain hole?

No, but I found it to be extreemly amusing that some one out there has a sense of humor similar to mine.

I heard an interesting statistic a while ago, can’t quote it exactly but … there are somes estimates of up to 25 million feral cats across Australia, killing on average three or more species a day to survive. This equals a staggering 75 million species of (mainly) native animals including reptiles each day!

Okay, got it now? I just thought I’d clear any confusion.

I heard an interesting statistic a while ago, can’t quote it exactly but … there are somes estimates of up to 25 million feral cats across Australia, killing on average three or more species a day to survive. This equals a staggering 75 million species of (mainly) native animals including reptiles each day!

In 1952 there was just one statistic in all of Australia. We imported it from Great Britian*. By 1958 there were over 100. 1971 saw Australia celebrate its 100,000th statistic. In 1988 the number of Australian statistics grew to over 1 million. By the end of the 20th century no less than 50 million statistics, mostly due to live cricket coverage. In 2010 Australia officially lost count of its statistic population.

*Thanks be to Alexei Sayle.

Why do picture of cats always bring out the cat haters? How about some pictures of feral dogs for a change? Let’s even out the hatred a bit 🙂

Also, went for a long drive last night saw a lot of feral rabbits, a feral fox, dozens of kangaroos, some owls and bats but not one single cat in the woods.

I actually have a cat – double-belled, and curfewed from sunset to sunup. And you won’t see a cat in the woods. When my cat dies I won’t be getting another one – too dispirited by the massive rise in the extinction rate for small mammals in Australia. You don’t have to be a cat hater to be disturbed by the presence of a healthy, growing population of feral cats in the bush capital.

Hey Buzz, ever stop to consider how many native animals died and continue to die in order for you to live in the manner that you do? Feral cats could never come close to equalling the damage caused to our native animals by humans, but it’s always easier to place the blame somewhere else.

I saw them selling PCP to some dogs from MacGregor.

Did the photographer spray paint the word “MEOW” above the drain hole?

There are somes estimates of up to 25 million feral cats across Australia, killing on average three or more species a day to survive. This equals a staggering 75 million species of (mainly) native animals including reptiles each day!

(I would assume you have totally misrepresented the fact behind that stat and that ‘on average, three or more species’ are shared species, in that any one cat may eat multiple species, but two cats living in similar areas may actually similar species…)

Otherwise, biologists should just follow the feral cats around and discover where the previously undiscovered 98% of life on earth had been hiding.

PS: I am not cat people, I can deal with domestic cats that live indoors, but I am a definite feral cat hater. Ideally draincats would be drowned cats.

This equals a staggering 75 million species of (mainly) native animals including reptiles each day!

Wow, starting with a total of about 1.25 million species of animal there will be none left by lunch time.

Poorly worded sentences aside, I agree with everything you have said.

I fail to see why a lot of people can’t accept that I love my little pet cat while simultaneously hating native eating ferals? I feel the same way about most humans I know.

Urban Adventures said: “They displayed a distinct lack of interest in catching several small birds who seemed to enjoy teasing the cats.”

You were viewing these cats on a lazy sunny afternoon, I’m guessing. Once the sun goes down, it would be a completely different scenario. The cats & birds then “play” the survival game and our native animals are the losers in this game. I heard an interesting statistic a while ago, can’t quote it exactly but … there are somes estimates of up to 25 million feral cats across Australia, killing on average three or more species a day to survive. This equals a staggering 75 million species of (mainly) native animals including reptiles each day!

I’ve seen feral cats in the most remote areas of national parks, its truly sad. They are born preditors and native animals are no match against them. Our local rural dog trapper (paid for by the rural protection board/local council) would often show us the results of his catch … huge, healthy feral cats with protruding fangs like you wouldn’t believe.

And some of you wonder why the cat haters come out of the woodwork when “cute” feral cats are advertised on RiotACT?

Wow, the cat in the first pic certainly gets around:

Capital Retro - 5 hours ago
I was surprised to hear a secondary school student tell me that teachers are now telling students that they have rights and e... View
Kasra Mn - 14 hours ago
At what $$ point is someone wealthy? View
Anita Patel - 14 hours ago
An excellent article. View
News 2

ACT resident - 5 hours ago
This latest CRS thought bubble promises flammable construction waste to be diverted from landfill and delivered for processin... View
simm - 20 hours ago
FYSHWICK is the wrong location for a high volume waste tipping station where that would interfere with surrounding investment... View
Opinion 1

rationalobserver - 7 hours ago
Its not just cars, all sorts of things now use our roads and it should be a shared cost. Usr pays and all that. In some subur... View
cycladelec - 15 hours ago
Plenty people with much more informed views than that Riot ACT know that now is not the time to impose a Road User Charge for... View
MERC600 - 1 day ago
What will be of importance is how the Feds look at electric powered vehicles. Fuel excise is a great earner for the Feds.. Ev... View
News 56

Anne O'Hara - 17 hours ago
Hannah Zurcher I have no problem with workers going for what they think they are entitled to, I do have a problem with them p... View
Nathan Lofthouse - 18 hours ago
Sorry who else is pulling 4% p.a ? View
Phill kirkham - 21 hours ago
Suez has a contract that commenced in 2013 and expires 2023, worth $180million. They have 5 other contracts worth around $12m... View
Property 46

russianafroman - 19 hours ago
Dukethunder You are not understanding what I am saying. I told you to understand what the heat island effect is. Yet you give... View
News 53

Jordania - 21 hours ago
Sanctimony has nothing to do with objections to Mr Seselja. Indeed, if there is any sanctimony around it is his. His ultra-co... View
News 38

@The_RiotACT @The_RiotACT
Queanbeyan-Palerang Regional Council has been named the most progressive metropolitan or regional council in NSW for 2020 https://t.co/2wSisTErgK (41 minutes ago)

@The_RiotACT @The_RiotACT
Fiona Carrick is back in charge of the Woden Valley Community Council after a strong election tilt, and more fired up than ever https://t.co/83KCM8twvy (2 hours ago)