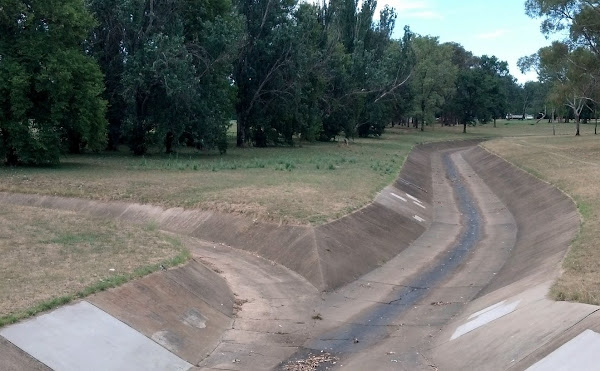 I can’t honestly recall Sullivans Creek with not even a trickle of water flowing through it.

And yet there it is.

Got an image of Canberra you want to share with the world? Email it it to images@the-riotact.com .

16 Responses to The dry sullivan
Filter
Showing only Website comments

It’d probably get eroded pretty badly. Especially once the willows (which were planted on the banks of all similar creeks in Canberra) were massacred.

I spent many hours as a kid playing around the creek that runs through Haig Park in the 70’s and 80’s. Catching tadpoles, frogs, leeches, tubifex worms, earth worms … I thought it was my own slice of paradise. There was always some water to be found, even if it was only a few stagnating pools for the dogs to use as perfume. Good times they were.

Bank erosion was not a significant issue back then, but it was mainly due to lots of trees along the banks. Looking back at it now though (hindsight is always 20/20) I recognise many of those trees holding the banks together as pest species (catoneaster, pyracantha etc). Sullivans would indeed look awesome if it were heavily planted, even if only to hide some more of that awful concrete corridor from view.

Yep, driving home in the middle of the storm last night it was well over the top of the concrete banks.

I bet there’s plenty of water in it now.

and sad to think that this lovely stream which inspired the Cashew’s ‘Down by Sullivan’s Creek’, should have declined to such an uninspiring state.

your mileage may vary.

Damn straight YMMV, JB. I was at Lyneham high not too long ago in the grand scheme of things, and it was pretty much always dry. This is five or so years ago, but I still don’t think you can call it a rare event.

It sure can flow fast after a big rain event. I remember the guys from Ursula College going down it from ANU Bar to Burgman Collage in a canoe and being bitten by a water rat.

Holy crap, that’s terrible. I hope the poor thing was OK, and didn’t need too much medication or counselling. What an experience for a rat to undergo.

Total Concrete Management has been out of fashion for Civil Engineers for decades now. There are plenty of more attractive and enviromentally friendly designs for such waterways that work just fine. Of course, none of them are as much fun to ride your bike in ….

It’d probably get eroded pretty badly. Especially once the willows (which were planted on the banks of all similar creeks in Canberra) were massacred.

It sure can flow fast after a big rain event.

Sure does. Takes no time at all to fill up, although, again the Lyneham wetland has altered this a lot. It now takes a bit longer to fill and quite a bit longer to drain.

It sure can flow fast after a big rain event. I remember the guys from Ursula College going down it from ANU Bar to Burgman Collage in a canoe and being bitten by a water rat.

A combination of people no watering gardens less (and no longer hosing down driveways) and having home water tanks intercepting storm water has been reducing urban runoff a lot over the last ten years.

“I can’t honestly recall Sullivans Creek with not even a trickle of water flowing through it.”

I admit it’s had at least a trickle more often than not since the Lyneham wetlands were finished, but prior to then it was almost always bone dry. Especially prior to 2009 or whenever it was we got all the rain to break the drought.

your mileage may vary.

Jenny McInnes - 8 minutes ago
While there are a many 2 bedroom properties alot would be in larger complexes with stairs. If the couple are happy to move to... View
Bel Lee - 20 minutes ago
Stuck is the word, if you live in gov housing you relinquish the right to rental references. All housing will tell a private... View
Karin Hagel - 51 minutes ago
Ashley, the one I know of has owners in Sydney but it has been left without tenants and is becoming uninhabitable due to unre... View
Property 5

Kathleen Lee - 2 hours ago
What! They are historical buildings. Don't be so silly. View
Glenys Callaghan - 5 hours ago
I love these buildings, they represent Canberra to me. I hope they are never pulled down as they are part of Canberra’s his... View
Property 5

ChrisinTurner - 5 hours ago
Some of the footpaths in Braddon are still narrow concrete and the rest dirt. View
Community 10

Anna Noces Gatdula - 7 hours ago
One of the most hard working I work with! Bless you barb😘 View
Jenny Pearce - 8 hours ago
Well done Barb, you bring joy to the little people in your care.😀 View
Lifestyle 11

Canberrans under the age of 50 will be shepherded towards the Pfizer vaccine at the Garran vaccination hub instead of receiving...
Lifestyle 92

Neuron Mobility has announced their fleet of orange e-scooters have clocked up 1 million kilometres since their introduction in Canberra...
News 41

What’s the secret to keeping a family-owned and operated restaurant in business for almost 20 years? Three generations dedicating their...
Opinion 35

The plight of former Barnardo’s mother of the year and mum of seven Belinda Nunn brings into sharp focus the housing...
News 24

Life as a Canberra space tracker in 1969

How to avoid losing your job after the office Christmas Party

@The_RiotACT @The_RiotACT
In recognition of their commitment to turning waste products into quality resources, @iconwater scooped up several Banksia Awards for Sustainability https://t.co/17dWPPPinm (20 minutes ago)

@The_RiotACT @The_RiotACT
The number of vacant properties to rent in the ACT is shrinking. New data shows just how tough the market is https://t.co/MMNxYSKl3A (3 hours ago)