Following the success of their first album, Triple J Unearthed winners The Ellis Collective will return to The Street Theatre to launch their latest album, Carry. A patchwork of emotion that recounts the sadness, sickness, love and indecision that weaves its way through the fabric of everyday Australian life, The Ellis Collective are on stage Saturday September 6th at 8pm.

I talked to frontman Matty Ellis about music in Canberra and making the band’s first film clip. 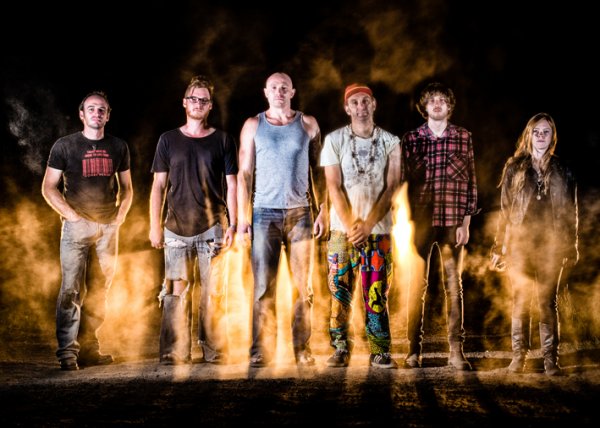 How would you describe your sound?

It’s difficult. We sort of tread around the area of folk, and there’s a little bit of country in there too. We tried to record the whole album live so it has a live acoustic vibe in terms of genres.

When did you first get into music?

When I was four I decided I wanted to play the violin. My mum thought it was worth holding off until I was five but I was pretty persistent! I played the violin for long time until I was in my late teens and it finally got a bit too much for me. There’s just too much practice required to maintain the art, so I stopped playing and started playing guitar and writing songs instead.

Your new album Carry has been described as quite dark and melancholic, what kind of influences inspired the album?

There’s a certain amount of catharsis in writing a lot of the songs that we play. If I’m going through some tough times or the people around me are going through tough times I often find it a bit of an outlet if I can write a song and get it out of my system. So it’s just the life experiences of myself and the people that are close to me over the last three or four years. This album deals with more grown up issues than the last album.

So you’re interested in the bleaker side of Australian life?

I don’t write happy songs. You need a strong emotion to drive creativity and there’s nothing that hits harder than bad experiences. As you go through life you have friends pass away or move away, and everyone can relate to those experiences.

The film clip for your song Blackwords is pretty heavy, can you tell me about the idea behind it?

The video clip was made by Scott Holgate. The song itself is about being stuck in a difficult situation that you can’t get yourself out of. Sometimes when you’re in a bad situation you’ve just gotta go with the flow, otherwise you’ll just make it worse. That’s what the video is about, a guy is stuck in a situation and it just goes from bad to worse for him.

Tell me about the process of filming the clip.

It was all pretty low budget, but the key is to make it not look low budget! Scott has a good sensibility in terms of how to shoot things and has some good equipment. We borrowed a friend’s house for the weekend, because it has quite a distinct look architecturally and we wanted an interesting space to work in. We shot most of the stuff in her house, backyard and shed. It was really good experience which we’d never done before. It was less about making a video clip and more about making a short film for us.

You’ve performed at Groovin The Moo’, the Woodford Music Festival and the National Folk Festival, how did that feel?

Having a chance to play anywhere is great. The opportunities that have come our way have been really great, but it’s not something we’ve been aiming to do, we’re just lucky. We just want to make good music and let the chips fall where they may.

What do you think of the Canberra music scene?

I love it, I think it’s fantastic. Making music in Canberra is the best thing in the world. It’s a really close-knit community where you’re good mates with a whole bunch of bands that you really respect as well, it’s a really cool experience.

What was the first album you bought?

Marvin Gaye’s Let’s Get It On.

What are the band’s plans for the future?

We’re going to get this album out the door and enjoy that moment. And then we’ll see what happens next. We’ll keep managing life around our music and just keep creating!

The Ellis Collective will be supported by Kira Puru, front woman for Melbourne-based band The Bruise. Kira takes the stage for an intimate solo performance punctuated by soothing guitar and electronic pop-hustle.

The Ellis Collective’s second studio album Carry is released on 8 September through iTunes and Bandcamp.

Jonathan Nicholl - 2 hours ago
Andrew Dale I work in a private business and now work mainly from home. Depends on the job I reckon View
chewy14 - 2 hours ago
Wow, For a party that is apparently against systemic discrimination, they sure do propose a lot of it.... View
Steven Campbell - 2 hours ago
If we lump all the actual work that get done by a public servant in a week. A one day work week will suffice. View
News 2

Marcel Bond - 4 hours ago
I don't know what the answer is...hell, when it comes to drugs I'm not even sure what the question is. But one thing I do kno... View
ssek - 9 hours ago
Is this bloke serious? “There is no more stigma that you can put on someone than calling them a criminal for something that... View
News 3

HiddenDragon - 6 hours ago
Interesting summary - thank you. The release of the letters on Bastille Day is doubtless a complete coincidence......... View
Stephen Saunders - 7 hours ago
Though the Palace was in the plot up to their eyeballs, Elizabeth and Charles "weren't told" on the actual day. No wonder Cha... View
Sport 1

Kathy Schneider - 9 hours ago
Yes having bad luck with injuries really makes it hard to get to the finals. View
show more show less
*Results are based on activity within last 7 days

A troop of former Australian War Memorial officials opposed to its controversial $500 million redevelopment will line up before a...
Food & Wine 51

@The_RiotACT @The_RiotACT
Crepe-lovers of Canberra, get excited because a new café dedicated to churning out crepe perfection has landed in Braddon https://t.co/xrGcJ8A4QN (4 hours ago)

@The_RiotACT @The_RiotACT
The ACT Greens have put women at the centre of their gender-recovery COVID-plan, focussing on a four-day work week and more work-from-home opportunities in the ACT Public Service, as well as gender weighting in criteria for funding or contracts https://t.co/RIpCqj1Dmj (6 hours ago)