The faces of the Goldcurves attackers 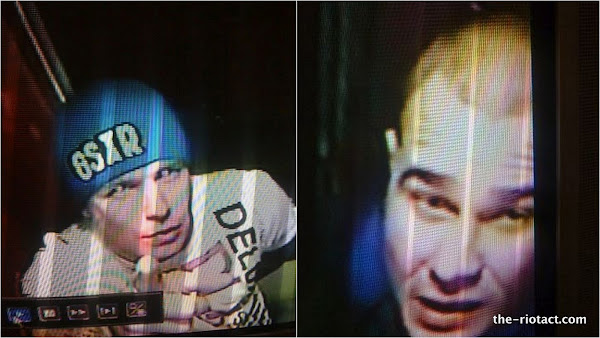 ACT Policing has released images of the men alleged to have committed an aggravated burglary at the Goldcurves studio on Wollongong Street in Fyshwick Saturday morning (July 14).

Around 6.15am, two men rang the studio’s doorbell, not realising it was closed. One of the men kicked in a rear door, allowing both men to enter the studio, before being chased out by two of the owners.

A fight occurred between the two men and the two owners in the front car park on Wollongong Street. One of the owners was hit over the back of his head by a glass bottle and the other owner was punched in the face.

Both men fled the scene on foot in an unknown direction. The two owners were taken to The Canberra Hospital for treatment of injuries sustained during the fight.

The two men were described as Caucasian in appearance, about 183cm (6’0”) tall with a heavy build, short hair and spoke with an Irish accent. One of the men was wearing a blue T-Shirt. The other man was wearing a white T-Shirt and a blue beanie and had tattoos on both of his arms.

Anyone who witnessed the aggravated burglary or saw two men matching the above descriptions in Fyshwick this morning is urged to contact Crime Stoppers on 1800 333 000, or via the Crime Stoppers website on www.act.crimestoppers.com.au. Information can be provided anonymously.

It may have been the best they could get at the time. Sometimes only certain managers or IT guys are the only employees who can access CCTV, so it might take days. It’s better to get something out there straight away, rather than wait for a better image and release it after the story has gone cold.

Fair enough. I assume they have caught ’em already, since they haven’t bothered to release a clearer photo?

Awww their parents must be as proud as punch.

They are not Caucasian!!!!

“Irreparable damage was done to Sutherland Shire upon the screening of Channel 10’s latest show, The Shire (Not that it was any good to begin with). The Sutherland Shire passed away peacefully at 8:30pm on 16th July, 2012.”

Caption left: “Is that thing a security camera?”
Caption right: “Nah man, it’s totally a fake. Bash the door in like I said before.”

Ah crap. Beat me to it. Obvious, but still good. 🙂

Really, given the expressions and gestures, I assume that an exchange along those lines is exactly what occurred.

Such a good picture. Shouldn’t take long for police to id them.

That should be the minimum standard quality for CCTV.

Caption left: “Is that thing a security camera?”
Caption right: “Nah man, it’s totally a fake. Bash the door in like I said before.”

It appears that a security camera, for the first time ever, may have recorded a usable image of someone’s face. Why does it appear that ACT Policing then took a photo of a monitor with a iPhone and released that?

It may have been the best they could get at the time. Sometimes only certain managers or IT guys are the only employees who can access CCTV, so it might take days. It’s better to get something out there straight away, rather than wait for a better image and release it after the story has gone cold.

It appears that a security camera, for the first time ever, may have recorded a usable image of someone’s face. Why does it appear that ACT Policing then took a photo of a monitor with a iPhone and released that?

Bronwyn Wilson - 35 minutes ago
Where are e teacher librarians going to come from? There are very, very few in the ACT - that’s why so many schools don’t... View
Chris Cross - 1 hour ago
Layla Barry almost $1 TRILLION and counting, courtesy of Federal Liberals, who almost scared the nation into recession with t... View
Pam Wood - 4 hours ago
Another rort in progress View
ACT Election 16

Jeff Smith - 1 hour ago
Darron Marks The school closures in the South are not just as simple as 'the area no longer being a nappy belt'. Schools in t... View
Darron Marks - 8 hours ago
Schools being closed I would assume is a direct reflection of the change from the Southside being the former nappy belt of th... View
Evan Hawke - 8 hours ago
Darron Marks Yep, as the Government has been putting in great infrastructure in Gungahlin they have been downgrading the infr... View
Lifestyle 9

Fito Ferrari - 3 hours ago
Lake Burley Griffin should be emptied, land filled and lots of apartments built on it. View
Brent Hutch - 3 hours ago
Gloria Altinger might need to check your maths View
Tom Munro - 5 hours ago
Conrado Pengilley Nothing to do with ACT government. It’s NCA land and would be federally funded. View
Property 8

Paroksh Datta Prasad - 7 hours ago
Adam Burzynski I called it in 2013 hehe View
Adam Burzynski - 7 hours ago
Paroksh it has begun.... View
Scott Humphries - 23 hours ago
"Braddon of the south" . So the light industry and commercial businesses will eventually be pushed out by apartments, just as... View
News 14

Jim Jim - 10 hours ago
Balanced journalism Ian, neither political party are doing that fantastic a job and deserve your devotion. Be critical of bot... View
News 7