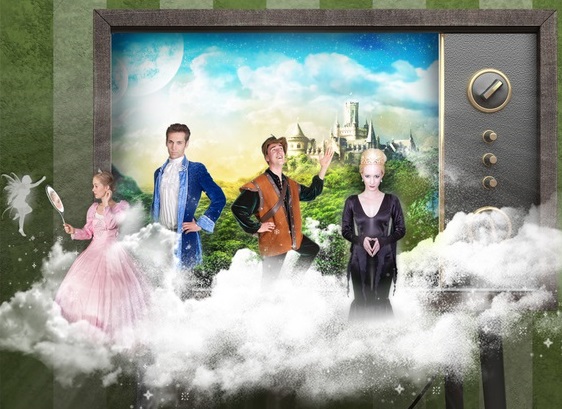 Local writer/director Kirsty Budding pulls us into our televisions (or at least our DVDs of Disney movies) for The Fairytale Channel, a children’s show in the style of Shrek and Fractured Fairy Tales that skewers fairy-tale logic and encourages us to be what we really want to be.  Even if it’s something boring like an accountant.

Slacker teen Alice (Nikole Rene Souza) complains that the stories in fairy-tales are too unrealistic but when she is sucked into her television is shocked to find out that the fairy-tale characters themselves have their own minds and different ideas about what they want to do in life.  For instance, a fey Huntsman (Josh Knol) confides to us in a musical number that he’d rather hug animals than kill them, and is seriously contemplating veganism.  When Alice finds out that Cinderella has a thing for the Huntsman and not Price Charming (Luke Middlebrook) she decides to correct the story by pushing Cinderella in the direction of her destined Prince, all the while dispensing mordant relationship advice.

The idea is that Alice, despite surface cynicism, deep-down wants the happy ending that fairy-tales promise but life denies.  However Alice’s self-discovery is rushed.  Because the fairy-tale characters are already unhappy with their roles and trying to find new ones Alice almost instantly starts trying to protect the conventional narrative.  In the first half she wavers Hamlet-like between trying to shake up the fairy-tales and trying to keep their stories on course.  Cinderella wants to be an accountant and we wonder what’s actually stopping her – Alice seems to be the only person who actually cares what Cinderella does with her life.  Even the villain, the Evil Queen (Cara Irvine), is too busy trying to destroy the world to micro-manage the character arcs of other fairy-tales.  Cinderella’s journey from helpless damsel to strong, independent woman is the centre of the play and it would have been a much more meaningful journey if she had been forced to confront forces trying to keep her in a traditional role.

Like its inspirations, the play tries to appeal to many different audiences: fairy-tale characters for children, Alice’s cynical outlook for teens, and sophisticated jokes and references for the adults.  At one point the Evil Queen gives a Pauline Hansonesque speech about how “mundies” (humans) are coming to the fairy-tale world and taking their jobs and changing their way of life.  Children will see the Evil Queen raving and threatening while adults will recognise rhetoric normally used about boat people.  The script is also very literate, tailored to adults rather than children.  At one point Alice quips that “society is so separated from the food production process these days”, and we are repeatedly told that love is “just a rush of endorphins”.  While it’s been pitched as a children’s show (and it did delight the children in the audience) I feel as though the play’s true aspiration is to communicate its ideas to adults.  Rather than a children’s story with subtext adults can enjoy (like Shrek), this is a story for adults that contains characters children will be familiar with (like Sondheim’s Into The Woods).  Adults can dismiss love as only a rush of endorphins but children certainly don’t see it that way.

Overall it’s a rough but engaging production that builds in energy to a very satisfying conclusion.  This is a short play packed with lots of ideas and ambition.  However the play needs to be refined a little more to fully realise the potential of those ideas.  Smith’s is an excellent venue for getting new work up on its feet, but the small size of the stage is a limitation: here the piano used for the musical numbers ate up most of the stage space, preventing the actors from using the space effectively.  Hopefully this performance was just a teaser and we will eventually see a bigger, bolder production at a venue such as the Courtyard Studio.  That said, both adults and children were entertained by the performance I saw, so the show can be said to have succeeded on its own terms.  This is school holiday entertainment where parents and children can both have a good time.

When: 15-19 July
Time: 10am and 2pm
Where: Smith’s Alternative
Price: $10 for everyone
Tickets: http://www.trybooking.com/Booking/BookingEventSummary.aspx?eid=91725

@The_RiotACT @The_RiotACT
St Benedict’s in Queanbeyan has been helping locals for more than 15 years, offering meals, friendship, advocacy & support to those who need it most https://t.co/l22RO7R84o (38 minutes ago)