The fruit of the limits 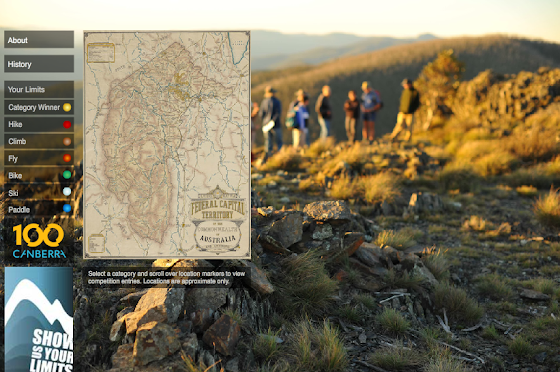 Canberra 100’s Show Us Your Limits, devoted to the centenary of the survey of the ACT Border, has announced the winners of their competition to Chiefly fanfare.

The winning entries are:

— Best Short Film: Nic Welbourn for his entry “Show Us Your Limits” which explores the skies around the ACT border by hang glider.

— Best Under 18 Entry: Lawrence Mercieca for his digital media montage titled “My Adventure to the ACT Border” filmed during a walk to find historic border markers run by the Canberra Bushwalking Club in response to the Show Us Your Limits competition.

To view the entries there’s a vast multimedia thing.

Tags Canberra 100 centenary of canberra show us your limits

Alex Paech - 45 seconds ago
Jarrod Osborne ahhhaha cya soon View
Jarrod Osborne - 1 minute ago
Alex Paech greens may be out of action but I know what’s not View
Jason Hutty - 10 hours ago
Tim Van Der Vlist I'm not sure if you understand the economics of a member's club. The members own it. So yes, of course they... View
Opinion 183

Ursula Gamal - 10 minutes ago
Yes yes yes and rude. View
Alex Dee - 1 hour ago
It’s not, it’s only the noisy minority that are having a whinge about Canberra drivers.... View
Belinda Maiden - 1 hour ago
I’m new to Canberra and have been surprised to find that: * P-platers seem to be allowed to drive at twice the posted speed... View
Breaking 7

John Moulis - 1 hour ago
Thank you to those people who have responded to my initial post. Since airing my experiences here and on Facebook it is clear... View
I am a Rabbit™ - 10 hours ago
The problem with the approach of the federal government was they were trying to reach a middle ground between not pissing off... View
chewy14 - 12 hours ago
You're assuming what he's saying is correct though. Whilst they do have controls to prevent vaccine "shopping" for people not... View
Property 23

New road safety cameras on Northbourne Avenue and Barry Drive in the city have identified around 5000 motorists exceeding the...
Opinion 183

The world's first plumbing systems emerged around 800 years BC. Created by the Romans, aqueducts and pipes supplied water across...
News 23

@The_RiotACT @The_RiotACT
Avoiding the main roads can be a false economy and a curse on neighbourhoods, says former rat runner Ian Bushnell https://t.co/Utlb3tlmeb (2 hours ago)

@The_RiotACT @The_RiotACT
Find you're already stuck for ideas to entertain the kids over the school holidays? Look no further for inspiration, with workshops to tours and nighttime fun https://t.co/4Ey9eKhGEt (12 hours ago)

@The_RiotACT @The_RiotACT
There's a big week ahead in #Canberra with markets, music and comedy - there's something to please everyone https://t.co/wy6n8HbUv0 (13 hours ago)