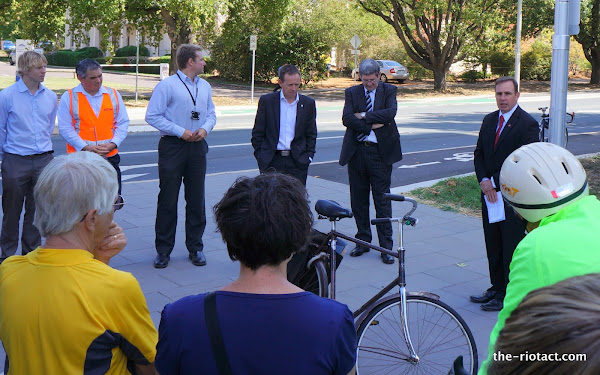 Mayor Rattenbury is putting forth word that the mighty Civic Cycle Loop (stages 1 and 2) are opening today at noon.

“I’m pleased to announce that the first two stages of the Civic Cycle Loop are complete and open for people to enjoy,” Mr Rattenbury said.

“The Civic Cycle Loop includes Canberra’s first separated ‘Copenhagen-style’ cycle lane; a great addition to the CBD which will give cyclists better access into and around the city.

“The Civic Cycle loop aims to minimise the difficulties associated with travel on congested footpaths and roads in the City area. The majority of the loop will be segregated from general traffic, which is great for new or less confident riders.”

Mr Rattenbury said $6 million has been invested for the design and construction of the Civic Cycle Loop which, when completed, will be a 3.2 kilometre cycle path around the entire City.

The first stage of the Cycle Loop begins on Rudd Street, connecting Bunda Street and Northbourne Avenue with Marcus Clarke Street. This section provides 400 metres of 1.8 metre wide cycle lane on either side of the street.

The second stage, Marcus Clarke Street, connects Barry Drive and Rudd Street with the existing cycle path network around Lake Burley Griffin. This section is 1.1 kilometres long and provides cyclists with a two metre wide cycle lane on both sides of the street for the majority of its length.

Completion of the entire Civic City Loop, including the Bunda Street and Allara Street sections, is scheduled for late-2014.

I wonder if Mayor Rattenbury is aware his bicycle does not meet Australian road laws.

Does if it has a back pedal brake. Don’t need brake levers to have a working brake and only 1 is required.

I wonder if Mayor Rattenbury is aware his bicycle does not meet Australian road laws.

What has happened to the 60 odd comments on this thread?

You mean these ones? http://the-riotact.com/riding-the-newly-opened-civic-cycle-loop-parts-1-and-2/98843

Cheryl Thuillier - 6 hours ago
Garbos don't deal with life threatening decisions daily. View
Lee McDowall - 1 day ago
Nurses should be paid so much more. Garbos think they have a tough job, swap for a day then ask for 12% over 3 years. Nurses... View
Roberta Lynne Anning - 1 day ago
Give them the same pay that the garbos get, and give the garbos the same pay that the nurses get. They just might shut the he... View
Food & Wine 9

Cilla Ong - 10 hours ago
Liu Rui that’s a VERY broad assumption. Would you stand by this assumption and be confident enough to attend one of these h... View
Opinion 42

Cary Elliot Johnson - 14 hours ago
Jennifer White actually just touches on the issue and is the tip of the iceberg that the greater public should know about how... View
Cary Elliot Johnson - 14 hours ago
Jenni Zimoch and allied health workers currently on $30/hr, but according to Jennifer, its just a rubbish issue as is the art... View
David Brown - 17 hours ago
Jo Hann I agree and I think the government should be demanding a rebate. They contracted to provide a service. They have not... View
News 6

Maya123 - 16 hours ago
About time this happened. Well done. View
chewy14 - 17 hours ago
The ACT government once again focusing on the big issues. Well done, not like there are more important things to be done.... View
ssek - 17 hours ago
"Inspectors will have the right of entry to businesses" So, warrantless searches? "Penalties of up to 50 penalty units" Makin... View
Motoring 3

@The_RiotACT @The_RiotACT
Keen to get festive on Christmas Eve with a great night out? We’ve rounded up some top local spots to consider https://t.co/P5iUGeuET0 (7 hours ago)