The Griffin fetishists express their disappointment

The Australian is running a lengthy story on The Walter Burley Griffin Society’s latest complaints about urban planning in Canberra. (google the headline and click if the paywall troubles you).

The Society has also published a lengthy video on the Griffin’s plans for Canberra which you can see above.

Their complaint to the Australian was this:

“The society is very concerned at the current state of planning in the ACT and the dysfunctional nature of the planning since self-government in 1989,” Professor Weirick told The Australian.

“Planning has been divided between the federal government and the ACT government in a very insidious and dysfunctional way.”

Professor Weirick spoke as the society released a video on the Burley Griffin plan to mark the centenary of its selection on May 23, 1912.

The society argues more attention needs to be paid to the plan for Canberra by Chicago architect Walter Burley Griffin and his wife and colleague, Marion Mahony.

“Many issues that Canberra faces today, which are often described as shortcomings in the Griffin plan, are demonstrated to have been skilfully resolved in the Griffins’ original winning plan but are as yet unimplemented,” the society said yesterday.

Which is all well and good but the problem is there’s no going back.

Parliament House is not going to be moved off Capital Hill. We’re not going to knock the War Memorial down and build a casino, or dig up Anzac Parade to make a park. Fort Fumble is not shifting out of Russell to make way for a market district and railway station. The Canberra Centre is not going to vacate Ainslie Avenue. As for the whole of Belconnen, Woden, Tuggeranong, Gungahlin and Molonglo? Are we going to get rid of them too?

I took this photo yesterday: 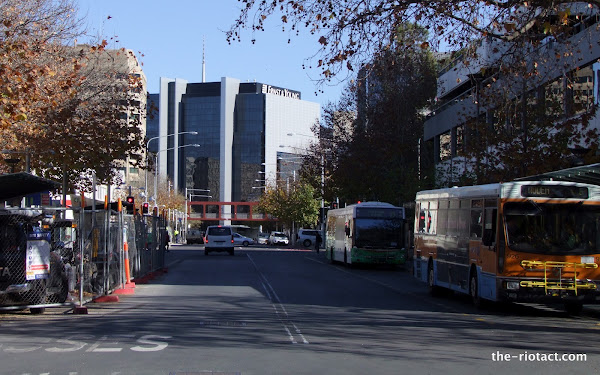 Notice how Alinga Street, supposed to be part of the grand Griffin axis, points at the summit of Black Mountain. Only we’ve slapped the Ernst and Young building over the axis and that’s not going away (but the tower still peeks over the top). Now if I turned around I’d see City Walk which has banjoed the grand triangle for decades.

Canberra might well have been a nicer city if we’d followed the Griffin plan. But we didn’t, and we haven’t for 90 odd years, and we can’t take it back.

The changes wrought on the plan since then (as ill-advised as many of them may have been) are as much a part of the city’s living history now as any drawings made in Chicago before the architect ever laid his own eyes on the Limestone Plains.

Any future decisions about where we take the city need to stand up in their own right, and on their own merits in the here and now.

But watch the video, it’s a great piece of local history.

Blah blah blah, these guys get way too much air time.

Would they like another review of the NCA and/or the ACT planning system? I’ve lost count of how many reviews have been done over the last few years.

Canberra so much better now than 10 years ago.

And, according to my old cadastral maps, the Canberra Melbourne railway runs right through the Flynn Primary School. Gosh.

Alinga street wasn’t part of a grand axis in the griffin plan; it was planned to disappear into the general hexa-grid pattern. The filling in of civic’s nw segment more represents a fulfillment of the plan.

The centenary would be a grand opportunity to formally announce that we no longer give a rat’s clacker about WBG’s plans (which is not to say that the loonies running the asylum are getting it right, either…)

I actually like Canberra now having spent the last 17 years or so overseas and coming back here I like the improvements.

“Between the mediocrity of the ACT government and the impotence of the NCA, the fate of one of the greatest planned capitals of the 20th century hangs in the balance.”

Let the truth be told!

franky22 - 46 minutes ago
Why can't the ADF simply state that they made a mistake. View
Peter Curtis - 23 hours ago
A mistake is questionable - using a very hot light under those conditions suggests a lack of forethought or understanding of... View
Peter Curtis - 23 hours ago
not a mistake but stupidity - if farm machinery had ignited it and not an extremely hot light there would have been charges. View
Opinion 59

Abolish the NCA to get Light Rail moving