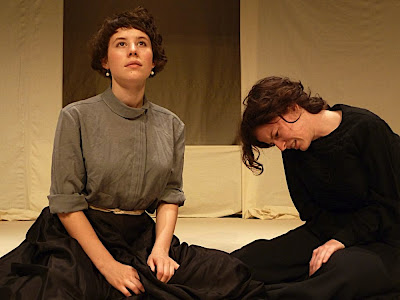 Earlier in the month we posted a note on a production of “The House of Bernada Alba” by Federico García Lorca.

Tonight I went along to opening night and was blasted out of the theatre by the all woman cast.

It’s a dark, at times horrific journey, and hours after the show my heart’s still hammering and my breathing is shallow. I’m probably going to have nightmares.

Leonard Cohen fans should note that he was in turn a huge fan of Lorca, having a hit with a translation of one of the author’s poems. Get along and see this and you can declare yourself an instant expert at dinner parties.

It’s a depiction of the hideously repressive pre-revolutionary society of Spain. It speaks volumes that when the tortuous social pressures displayed in the play erupted into the Spanish Civil War in 1936, Lorca was murdered by the fascists.

This is a big dark work. If someone tried to write the same setting as science fiction they’d be dismissed as absurdly bleak. But it bites because it’s all too real.

It builds banality upon banality to draw the audience into belief while the personal conflicts rage to a crescendo. At one point when one of the characters was nearing an exit to the theatre I was screaming in my head “Go, Just Go, Get out, Run and get clear”.

It’s not laugh-a-minute, you won’t come out whistling a happy tune.

But it will make you feel and make you think.

Details on how to book and show times are in the original note.

UPDATED: I should note that watching this play has changed my mind about the Spanish Civil War. I used to regard Franco as the lesser of two evils in that conflict. But now I realise why the supporters of the Communists had no choice but to fight. Which, considering the history of the play (the last of Lorca’s works before he was murdered never having seen it produced) is exactly its intention. Bravo for a work that never makes any direct mention of these issues.

I’m waiting for Passy to declare it ideologically correct..

They say that the greatest tragedy of the Spanish Civil War was that Garcia Lorca died and Hemmingway survived… I’m a big fan of both though.

The Spanish Civil war is a facinating subject that is all too often ignored. It was the first true ideological war of the last century, Fascist vs Communist. The UK maintained an interesting position throughout, with the UK Govt officially supporting Franco but large numbers of UK citizens fighting for Azana on the red team.

The play sounds interesting, I might try to drag mrs Neanderthalsis along.

Julie Macklin - 4 hours ago
Tim McMahon Road worthy checks! When was the last time your car had a road worthy check? It's been years since any car of min... View
Tim McMahon - 7 hours ago
let’s put rego and insurance on these bikes as well as road worthy checks every year just like cars trucks and everything e... View
Colette Robinson - 12 hours ago
Adrian Fui Fui Moy but the path *is* being used for racing. Pedestrians and slower cyclists in either direction are merely ob... View
Opinion 170

Phil Cowan - 6 hours ago
The 26th Jan is a Public Holiday because on the 26 Jan 1949 because we ceased being British subjects and became Australian ci... View
ghutch - 17 hours ago
A lot of good comments. Why don't we celebrate Oz Day on 1 Jan. Yeah I know you all still asleep from new year eve. But is th... View
Jenny McInnes - 17 hours ago
David Johnson it most likely was a public holiday there then View
Property 10

Peter Curtis - 14 hours ago
It is $500m not being spent on anything else but a dubious project to say the least. Ian tries to explain it all away as acts... View
Breaking 2

Peter Curtis - 14 hours ago
Not to sure what a "Canberra mentality" would be but as long as we surrender the principle of solidarity for the belief that... View
Food & Wine 1

Jackie White - 18 hours ago
Thank you. I never walk around the lake with headphones precisely because of the risk of collision with a cyclist View
James Messervy - 18 hours ago
Jackie White no, I always ring my bell or call out.... View
Community 7

Susanne Jennings - 18 hours ago
Great to see it so successful- well done! View
show more show less
*Results are based on activity within last 7 days

@The_RiotACT @The_RiotACT
Have the voices of post-Vietnam veterans been missed in the fight over the War Memorial expansion? Some veteran organisations say yes https://t.co/UC34DwlGFC (10 hours ago)