The Hummer of Charnwood. Images of Canberra 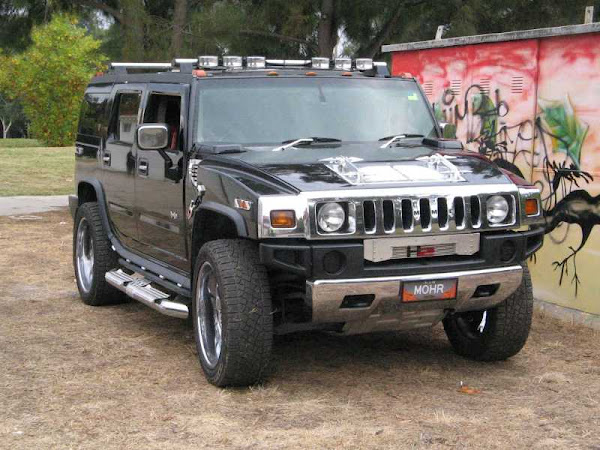 Owen has sent this in with the following note:

Google tells me ( while looking for the price of the beast ) they went out of production last year. This fellow is in first class condition.

32 Responses to The Hummer of Charnwood. Images of Canberra
Filter
Showing only Website comments

I don’t know about the fuel efficiency of the hummer, but I suspect that it has the aerodynamics of a house brick

Personally I’ve nvere understood the 4WD/SUV thing. They’re slow, handle like crap and use too much fuel. Unless you actually have a need for regular offroad use, they’re a wank.

If you want more than average space or towing, there are vehicles with far fewer compromises.

Innovation, you certainly are the very model of a modern social engineer. I bet you have all kinds of schemes to punish people who spend their money in ways you don’t like!

I am no great fan of Hummers, but if people want to spend their own money (not yours, Innovation) on an expensive car that also uses a lot of (highly taxed) juice, what business is it of yours? They are already paying a financial penalty, but since they still choose to do it, further and stricter measures are apparently required.

It sometimes seems that certain sections of the community just wish there was a great big Naughty Step that those who don’t conform to their preferred lifestyle could be sent to. Failing that, confiscating their pocket money, even if they have earned it, is the next best thing.

Your chances of converting the average Hummer owner into a public transport-loving greenie using these methods is somewhere between Buckley’s and none, and you know it. But ooh, the thrill of punishing the wicked is just so delicious!

I didn’t write that they should be “outlawed”. I wrote that they should be “taxed off the road”. For example, if the States and Territories could get their act together, vehicles could be better proportionately taxed based on a weight/fuel consumption vs distance travelled basis, meaning these things would be driven only as needed. It would also create other cost effective incentives such as sharing car ownership, owning second fuel efficient (cheaply taxed) vehicles, increased public transport useage, a more competitve market for hiring out larger vehicles etc. Of course some concessions might be required for some businesses and farmers etc that have a genuine need for “approved” large but fuel efficient vehicles and for rural communities who might get by with a small car but travel large distances.

Also, just brainstorming but, if these larger and/or inefficient vehicles had a marginally lower speed limit (to partly offset the higher fuel consumption compared to a smaller car) this might discourage people from driving them other than when needed or purely for ego purposes.

I don’t know about the fuel efficiency of the hummer, but I suspect that it has the aerodynamics of a house brick and that there are more efficient vehicles that suit whatever purpose many owners want them for (unless it is just owned for ego).

triffid- they are based on a Chevy Silverado, the H3 was loosely based on the Colarado (Rodeo, Dmax/GreatWall)

Innovation – they dont weigh 3.9 to tonnes, that sticker is bullshit. They are about 2.5 tonnes full of fuel. They should be outlawed off the roads??? So should every car, even they hybrids with their oh so envirnomentally unfriendly batteries……..

Yep, they are a pointless vehicle but so are electric cars that cost a bomb with 100km of range.

Black? I thought these things only came in
– Watch out for my lousy driving yellow; or
– Oops I just backed over my kids red

Out communing with nature (just don’t ask too many questions about how they got there. What? No! No! That’s not my Land Cruiser parked over there).

It the mountain bike over here.

Out communing with nature (just don’t ask too many questions about how they got there. What? No! No! That’s not my Land Cruiser parked over there).

I just looked up ACT rego’s website. If it is 3.9 tonnes then it seems that they pay $1194.40 rego (not counting any additional cost for the rego plate). Doesn’t seem anywhere near enough to me. They should be taxed off the road – especially since they don’t seem to serve any purpose.

In America apparently you can buy bumper stickers that are along the lines of:

When you’re finished lookin’ at ma truck, come around the back and you can check out ma small willy”

Do you think they mean a Hummer owner invariably has a Jeep as well?

I don’t think that’s because it doesn’t need them.

I’ve seen one with tow points. Pretty sure they were plastic.

Tow points or no, I’m certainly not bloody towing that thing with my car.

I think you are being kind…

That’s me all over, I’m all heart…

I don’t think that’s because it doesn’t need them.

I’ve seen one with tow points. Pretty sure they were plastic.

I think you are being kind…

I wonder where they stole it from?

No bullbar, highway tyres, a helicopter-like thirst for fuel, oh yeah, the ultimate off road vehicle.

In the US they rent out bright yellow ones from JFK airport, a very appropriate environment for them.

Plus, I can’t help but think the side steps would bend and the chrome come off the bash plate were you to actually use the car…

I have footage — on a DVD at home — of one of these out ‘wheeling’ with a couple of (not entirely standard) Jeep TJ Wranglers and Toymotor Land Cruisers in East Gippsland (where it can get a bit, er, damp and the trails a bit, um, ‘slick’). At one point that Hummer became nothing more than a 3.9 tonne bobsleigh down a descent as it’s ego wrote the cheque its ability was never, ever going to be able to cash. Lucky it stayed in the ruts. Could have used a scrub chain to slow it up a bit.

Driving a vehicle like that would make me feel less secure about my masculinity.

Plus, I can’t help but think the side steps would bend and the chrome come off the bash plate were you to actually use the car…

Nicolas Borgeaud - 21 minutes ago
Julian Curran, not the missile silo! View
Byron Carn - 4 hours ago
i don’t care what’s being built. It’s just always suss to me how many projects these guys keep getting View
Ashley Wright - 4 hours ago
Byron Carn if you are so worried how about you stump up the money to buy the property on the open market and building somethi... View
Property 37

Debbie Crane - 4 hours ago
Elroy Jones too old for that now. View
Elroy Jones - 10 hours ago
If you'd like to live in a rural setting then perhaps consider moving away from the city. View
Motoring 21

Ken Chau - 5 hours ago
Why Dickson?! How about O’Connor or Ainslie? View
Alex Elliott - 8 hours ago
How can Braddon and Dickson get $14 million combined and the single bus depot building get $6.5 million. I'd like to see how... View
News 25

chewy14 - 6 hours ago
I really wish that people would stop quoting the 400+ number of deaths in custody as if it means anything or signifies some s... View
News 5

chewy14 - 6 hours ago
How is it deception for you to be offerred a short term deal which has been honoured exactly as required? Did you sign a long... View
HiddenDragon - 9 hours ago
”The second recommendation is that retailers should have to tell their customers if they have a plan that could reduce a cu... View
show more show less
*Results are based on activity within last 7 days

@The_RiotACT @The_RiotACT
Fidget the friendly lorikeet is at @rspcaact waiting for her new owner to come along. Could it be you? https://t.co/Z0hnglnnYP (6 hours ago)

@The_RiotACT @The_RiotACT
Can you see yourself living in a luxury 10th floor, four-bedroom CBD penthouse? Here's your chance to make this stunning home yours https://t.co/z1ZSZFTIQv (7 hours ago)