The Importance of Being Earnest – Canberra Theatre Centre (Review) 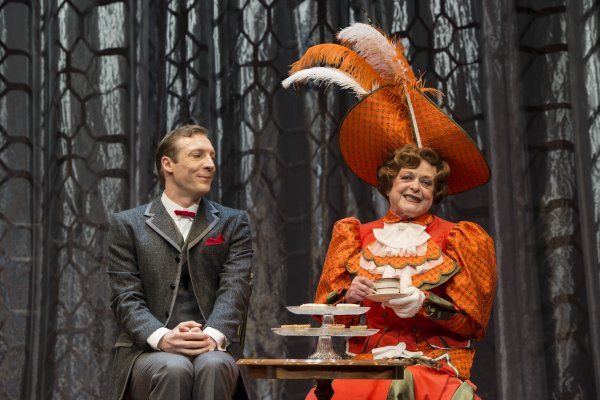 The Importance of Being Earnest can feel like fairy floss: sweet, yes, but when you start to pull it apart it becomes insubstantial. The play is an outright farce and this production by the State Theatre Company of South Australia emphasises the intrinsic silliness of the story. But if this is a farce, it is a farce crafted by a true genius of theatre, and the way this production steadily builds to a powerful climax shows why Oscar Wilde’s play has endured while so many comedies by his contemporaries have faded from relevance and memory.

The story is difficult to describe. Essentially, two friends (dandyish Algernon and serious John) have independently been living double lives to escape the stringent social demands of their upper-class existences. Their lies set up a complex series of misunderstandings that cascade into further necessary (and sometimes unnecessary) lies and confrontations.

What makes this play different from other mistaken identity comedies is that the situations are a logical extension of the rules the characters set for themselves. Oscar Wilde plays fair at his own game and the elan with which the characters are true to the rules even when the rules force them to depart from reality and sanity is genuinely poetic. Oscar Wilde’s famous wit is deeply cynical but just below the surface there is a deep love for the strangeness of life, and an absurdity is always pointing towards a deeper truth. When the two love-interests declare that they will not marry anyone other than an Earnest, they are simultaneously being ridiculous and touching on a sacred truth about the arbitrariness of love (and satirising the whims of a capricious lover). Characters attempt to lie but cosmic irony has decided that they are fated to unknowingly tell the truth.

Nathan O’Keefe’s Algernon is aggressively camp, contrasting with Yalin Ozucelik’s deadpan performance as John (alias Jack, also alias Earnest). I was initially uneasy to see Algernon acting so unrestrainedly silly. In early scenes he came across not as a dandy and rogue but as a hapless, shadier Bertie Wooster desperately in need of a Jeeves. However the pair bounce off each other in an effective double act and I warmed to O’Keefe’s interpretation of the character by the second act. The other cast members give highly polished performances. Nancye Hayes is intimidating as Lady Bracknell and the rest of the cast give her a lot of credibility through their reactions to her (sometimes even when she isn’t on stage). Anna Steen and Lucy Fry are wonderful as the objects of desire who ultimately form an alliance against their lovers in a combination of courtship and terrible female vengeance. If baptism is all it takes to woo these women, I can book one later this afternoon.

When watching the play I started off with unease and scepticism – the slightly goofy approach to the material didn’t quite work for me. But I was steadily wooed as the play developed itself and as the action mounted I became completely hooked. This is more than fairy floss and light entertainment, it is a highly polished production by seasoned actors and would be an excellent introduction to Oscar Wilde for those who have not experienced the writer or this play. Those who know the play will probably be divided on the interpretation in this particular production, but I was delighted by a charming play – and awed by Oscar Wilde’s enduring genius.

Where: Canberra Theatre Centre
When: 19 to 23 August, 8pm (also some matinees)
Tickets: https://www.canberratheatrecentre.com.au/site/the-importance-of-being-earnest.php

I have a spare ticket for tonight’s show if anyone is interested?

Douglas Taylor - 1 minute ago
Its only a topic because we could flatten it and make eleventy million dollars with MORE HIGHRISE! View
Liz Wawrzyniak - 7 minutes ago
It does cost more for seniors to travel to Sydney. It's half of full price.... View
James Pascoe - 23 minutes ago
No it has 1 job and it does that job doesn't need to be pretty View
Breaking 55

Jannah Fahiz - 41 minutes ago
So beautiful! Thanks for helping this roo. And be sure to stand up against the kangaroo cull. Soon we won't have any of these... View
Community 65

Tracy Lea - 1 hour ago
They are not ‘stealing’. The rocks are hidden with a message to keep OR re-hide.... View
Opinion 188

Ben Garden - 2 hours ago
How about we get something that’s actually fast like formula one rather than a car I can beat in a drag race in my daily dr... View
Naomi Breasley - 4 hours ago
Sounds teriffic, It will never happen too many Kevin's & Karen's. People's reaction to Summernats is a clear indicator of som... View
Community 11

Judi Teesdale - 2 hours ago
Totally agree Barb View
Elizabeth Woods - 3 hours ago
Barb Campbell excellent observation, Barb View
Acton - 4 hours ago
Those who habitually malign any local residents who oppose the removal of green spaces as NIMBYs should volunteer to have the... View
show more show less
*Results are based on activity within last 7 days

UPDATED 3:30 pm: Chief Minister Andrew Barr's response to a question about whether border compliance activities will be ramped up over...
News 24

Speculation around a potential return to Canberra of the Supercars, operating in a circuit around Exhibition Park, has raised the...
News 82

It looks like next year's federal election will be even more about keeping Australia safe. The Morrison Government will seek...
Breaking 55

Residents of Canberra, the South Coast, Geelong and Melbourne have had their mornings shaken up by a magnitude 6.0 earthquake...
News 49

@The_RiotACT @The_RiotACT
Researchers believe the clues to saving alpine plants from rising temperatures and more frequent bushfires may be hidden away in lake sediments in Kosciuszko National Park https://t.co/pwo8JHBQNu (26 minutes ago)

@The_RiotACT @The_RiotACT
A major apartment #development has been unveiled for the northern gateway to the Molonglo Valley suburb of Coombs that focuses on #sustainable, green features https://t.co/7v4smSFPQJ (2 hours ago)