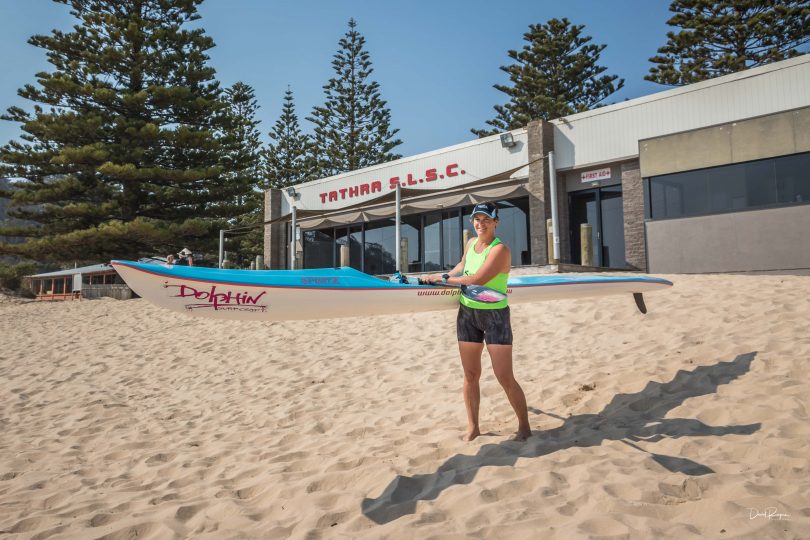 Mel Meaker has been training by paddling up to 24 km on her 10 kg surf ski. Photo: Dave Rogers.

Now in its 44th year, the gruelling George Bass Surfboat Marathon kicks off from Batemans Bay on 29 December.

In what is hailed as the ‘Longest, Toughest Surfboat Race in the World’, competitors (both solo and in teams) will paddle and row their way from the Bay to Eden, over seven days (and seven legs), along 190 km of arguably the best coastline in Australia.

Mel Meaker of Tathra is competing in this year’s event as a ‘solo surf ski paddler’.

Being a solo paddler, Mel doesn’t have team-mates or a support boat. She’s out there on the blue on her own, on a single surf ski which weighs only 10 kg and at its widest point is only 50 cm.

“At the start, there are others around you, but as the race goes on you are more on your own. I actually love that lonely moment out on the ocean. I just focus on my technique, and I think a lot about how much stronger I’ve gotten since I started paddling,” Mel says.

“I’ve really studied maps, and I go beach to beach, point to point along the way. I divide it up and I have a GPS with my time and kilometres and speed.

Even with all the safety crews and support, many would think this very brave. I suggest that perhaps Mel has no fear of the ocean, and her answer surprises me.

“Actually I do have a little fear of the ocean. I absolutely love the ocean, but one of my biggest motivations is to stay ‘on top’ of the water. There are a lot of creatures under there. There’s a whole life under the water, and if I don’t have my goggles and snorkel, then I prefer to stay up on top of the water.” 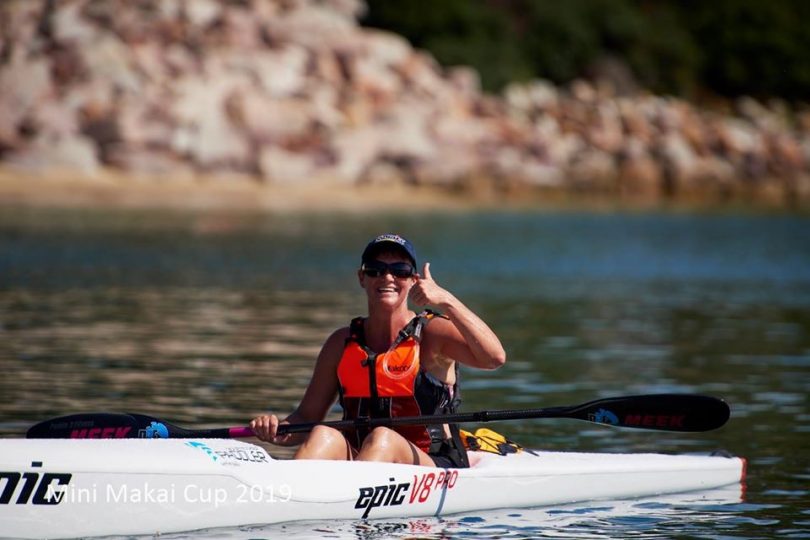 How does a solo paddler stay motivated, with no one in the boat to push and urge them on?

“I’ve always been one to try and do my best. I’m not necessarily a ‘gold medal winner’, although with the amount of training I’ve been putting in recently … well, I’ve actually tried to shift my focus onto trying to beat others in the upcoming race.

“I know that every single stroke is getting stronger, and I know now that I can do the distance. I’ve been training hard, so I just want to win a leg. I really, really want to win at least one leg!”

Mel explains her decision to rise to the challenge and compete as a solo paddler: “I’ve had such admiration and respect for those who do it, I’ve always been a little scared of what’s out there.

“Part of it is my involvement with the surf club, knowing how powerful the ocean is. I’ve been involved in rescue operations, with club members and people in the community. I want to beat the ocean!” 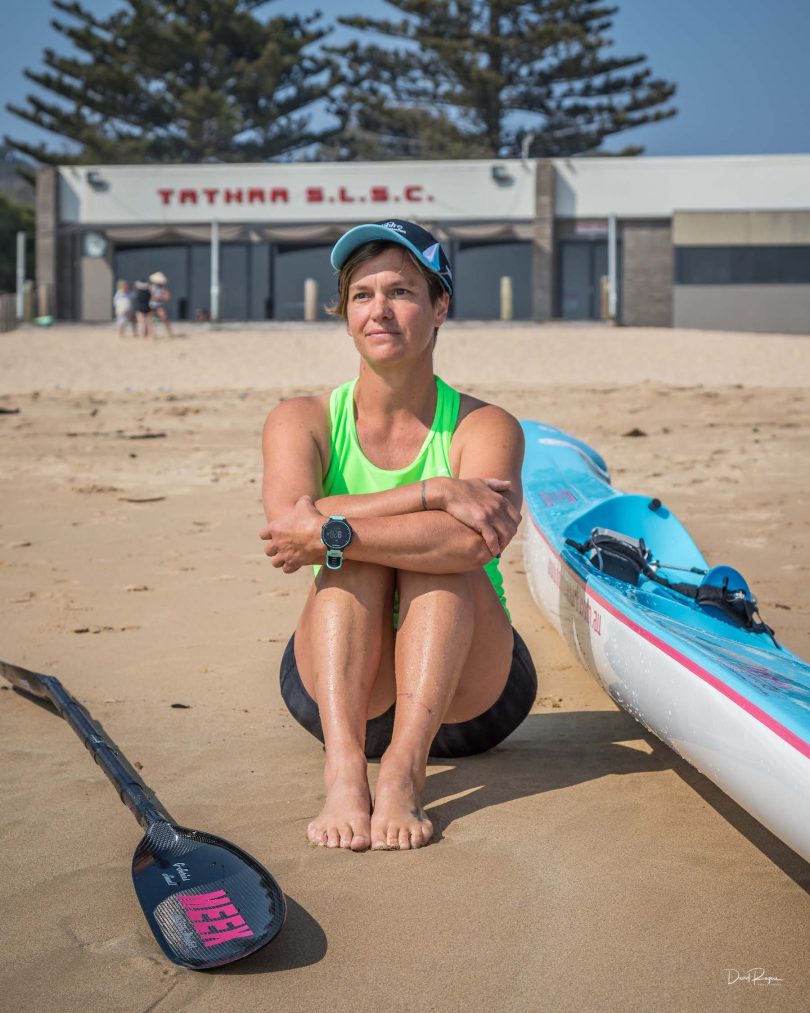 I love those lonely moments on the ocean. Photo: Dave Rogers.

“In the boats you’ve got people around you and people telling you what to do, whereas with the ski paddlers it’s just you and the ocean.

“But, there is that great back up in safety and support, which has given me the confidence to compete solo.”

During the George Bass, volunteer crews continuously patrol the ocean route, ensuring safety for competitors. “They’ll come past and say ‘how ya going?” says Mel.

“I’d definitely encourage other people to do this. Three years ago I was 25 kg heavier and I couldn’t sit upright in the ski, was just learning to paddle.

“I had been into surf boat rowing so I had a level of fitness and strength, but over those three years I added some training in the gym and also learning from mentors around me. I’ve been to coaching clinics, and we have six or so really great ski paddlers here in Tathra that I’ve been able to learn from.

“Anyone with the right motivation can do it. I’m also working as a full-time cancer specialist nurse in Bega, and I run a business, and I’m doing my Masters of Nurse Practitioner.”

So perhaps being in the George Bass is like having a week off for Mel? “I do kind of take it as my time out!”

The George Bass Marathon is divided into seven legs, with each functioning as an individual race, as well as the overall 190 km event. Each leg is between 19 km (the shortest) and 36 km (the longest).

Anonymous - 1 minute ago
We already have a public transport hub in the CBD. You can get from there to the centre of Sydney in 3 1/2 hours by public tr... View
Ross McConchie - 1 hour ago
Toby Töb thanks View
News 21

Mon Thorne - 5 minutes ago
Shannon Denley won’t be ordering during magpie season then hahaha View
Loris Manns - 1 hour ago
I am on the bird’s side! View
whatwik - 1 hour ago
Yes, birds as interceptor fighters, and killer dolphins instead of subs. View
Property 20

Paul Mills - 8 minutes ago
Becoming a common Canberra vista. View
Paul Mills - 9 minutes ago
And when the power goes off, they are stuck. View
Sarah Emmerson - 56 minutes ago
Why push back on this when the suburb over in Coombes looks like a ghetto with their “ vista “ View
Opinion 35

Tim Rozitis - 8 minutes ago
Louellyn Violet sort of agree. I'm an expat Adelaidean who has only ever supported Melbourne (from before Cows existed). My k... View
Tim Rozitis - 17 minutes ago
no. Too much population movement. There's enough expats from footy regions here at any time, but a lot of them are transient.... View
Judith Herald - 29 minutes ago
Sean Chamberlain Chicka Fergerson was a sparky by trade, saw him quite a few times after he retired doing electrical works at... View
Community 20

JC - 49 minutes ago
I can see the comments from chewy and the blue glasses brigade. Andrew Barr, Labor/Greens don’t care for business, taking t... View
chewy14 - 2 hours ago
I agree Whatwik. It's lucky they'll all be bankrupt due to the lockdown shortly anyway. Well done ACT Government, who needs S... View
Opinion 9

Andrew Bell - 60 minutes ago
Peter Hislop There is actually a map indicating an Airport-Kingston-QBN light rail ... all part of an integrated transport pl... View
David Malcolm - 1 hour ago
The most practical way to improve the Canberra services would be to eliminate ALL the Southern Higlands stops other than Goul... View
News 39