The man who defined Canberra architecture shuffles off this mortal coil 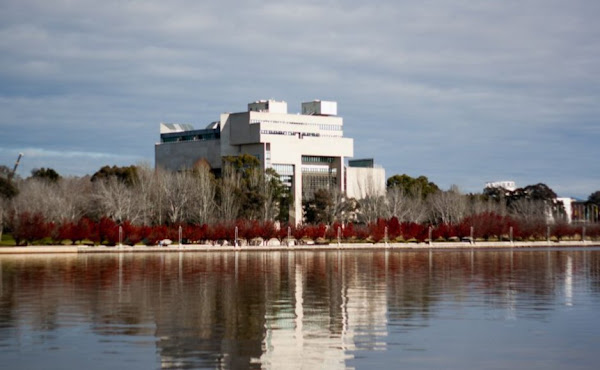 The Australian is eulogising Colin Madigan, the architect who gave us the High Court and the National Gallery.

THE architect behind two of the country’s most distinctive buildings, the National Gallery of Australia and the High Court, was a visionary who linked design to cultural identity.

“Colin was a thinker. To use concrete in a way that expresses such beauty is simply amazing, and I don’t think you’ll see the likes of it again,” he said.

We’ve had this in the mail:

Your article ‘The man who defined Canberra architecture shuffles off this mortal coil’ suggests the High Court building was designed by Colin Madigan.

The High Court of Australia was designed by architect Chris Kringas. Kringas was director in charge and led the design team, which included Feiko Bouman and Rod Lawrence. The team completed the design in 1973 working from a terrace house in McMahon’s Point, Sydney.

Construction documentation was substantially complete at the time of Kringas’s death in March 1975, just one month before construction began.

The constructed building is relevantly identical to the winning competition design.

While there are similarities in material and style between Madigan’s National Gallery and Kringas’s High Court, there are significant differences in architectural form and space.

Both buildings are postcards compared to the National Archives building on Flemington Road – that is the ugliest building I have ever seen.

As for the HCA, Courtroom #1 is quite nice.

Although extremely ugly and (in my view) not sympathetic to their locations, they are more interesting than 95% of the crappy buildings in Civic. Cannot someone build something attractive! Nishi, if the unions dont ban it, could be worthwhile.

Why are the unions thinking of banning work on Nishi?

On the main issue, Madigan was an architect with a vision and an individual style, whose buildings were never ordinary and safe. I’ll never forget someone whinging on about how ‘ugly’ the Gallery was, then turning to the Stalinist-style DFAT building (as it was back then) and saying ‘now that’s what I call a building’.

Although extremely ugly and (in my view) not sympathetic to their locations, they are more interesting than 95% of the crappy buildings in Civic. Cannot someone build something attractive! Nishi, if the unions dont ban it, could be worthwhile.

Sad.
I always found the gallery as a building fascinating on the inside but a bit too brutalist on the outside, the extensions have improved it. I do like the High Court very much.

I like brutalist architecture. It takes a while to ‘get’ and is certainly not everyone’s cup of tea.
Canberra is really lucky to have some wonderful examples of Brutalism. Although like lots of unusual architect designed buildings, they don’t always work as well as the concept. eg. the Cameron and Callum offices.

There’s a British comedy called skins and the camera dwells on the brutalist architecture of the housing commission areas – in particular Thamesmede and Southmere lake.

The High Court and National Gallery are two of the ugliest buildings in Canberra and have been since the day they were built.

Brutalism isn’t for everybody, but I think that these buildings, Llewellyn Hall and the Cameron Offices are kinda interesting.

“The High Court and National Gallery are two of the ugliest buildings in Canberra and have been since the day they were built.”

One persons ugly is anothers sublime.

The High Court and National Gallery are two of the ugliest buildings in Canberra and have been since the day they were built.

That sucks. A few weeks ago I was researching the architect of the national gallery and was amazed to find out that he was still alive. Would’ve like to meet him.

Keith Cheetham - 47 minutes ago
Pork barreling at its best as Labor does. And then dont initialise it. View
Bronwyn Wilson - 6 hours ago
Where are e teacher librarians going to come from? There are very, very few in the ACT - that’s why so many schools don’t... View
Chris Cross - 7 hours ago
Layla Barry almost $1 TRILLION and counting, courtesy of Federal Liberals, who almost scared the nation into recession with t... View
ACT Election 19

Glory Hammer - 48 minutes ago
Vicki Herbert, have you noticed that some of the candidates don't even know how to spell Yerrabi?! Not naming names, but if a... View
Glory Hammer - 50 minutes ago
Evan Hawke, your comments appear to have set up a north vs south debate, when this isn't the intent of the article. Peter Elf... View
Evan Hawke - 1 hour ago
Darron Marks Totally agree, there is a need to build more schools in Gungahlin as most of them are at capacity. The reason th... View
News 26

Jess Peil - 24 hours ago
This is so exciting! View
Roland De Saxe - 1 day ago
Great idea for Eden area View
Talla Mc Bogan - 1 day ago
happened in the otways ,, mountain bikes took the moto tracks ,, they only use a small area though ,, so plenty of moto track... View
Opinion 32