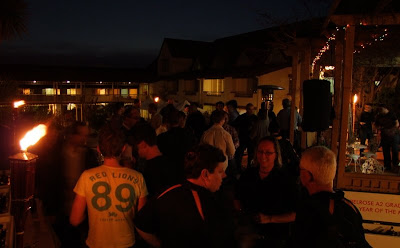 Last night I was fortunate enough to attend the industry night for today’s National Capital Craft Beer Festival. Being held at and sponsored by the Olims Hotel any concerns that it would be populated by tie-died beer hippies was soon put to rest.

Last night’s event was populated by brewers, hoteliers, distributers and the like and being able to talk to the man or woman who made the brew you are drinking is a rewarding experience. Three standouts in that respect for me was chatting to Christoph from Canberra’s own Zierholz Brewery; Richard Adamson from Barons Brewing and the passionate brewer of Dutch/German extraction, Samara Füss, the Schwartz brewery’s head brewer.

Another highlight was a long and in depth conversation with Colin from Brew Your Own At Home, the home brew supply shop in Kambah, which ranged from all things beer, the art and legalities of distilling to animal cruelty and the ACT justice system. It should also be mentioned that Labour MLA and the Minister for Tourism Andrew Barr attended and seemed quite interested in the budding craft beer industry although he made it quite clear (and in good humour) to the man with the camera and the RiotACT pin that as he was driving he was only having the one beer.

Today’s activities, kicking off from 10am, in addition to being able to hobnob it with the brewers and taste a wide range of exceptional beers include beer and food matching supported by Peter Russell-Clark, giveaways and a whole lot of other stuff. As of last night 850 tickets had been pre-sold for the event so it should be a very well attended shindig.

[Disclosure: Zierholz Brewery advertises with RiotACT and Baron Brewing provided RiotACT with some free giveaways. The Olims Hotel and Schwartz Brewery are sponsors of the Craft Beer Festival. Regardless I wouldn’t have taken the time to write about any of this if the beer wasn’t tasty and if the event wasn’t worthy!]

[ED – Apparently the event is such a success they’ve been turning away anyone without a pre-paid ticket. A bigger venue would appear to beckon for next year]

Arriving at the door to hear “We’re at capacity, so only prepurchased ticketholders are getting in, maybe come back in a few hours!” from a screaming german guy at the door meant that our group didn’t get in.

Our only prepaid ticketholder then on-sold his for a profit, though.

If the organisers are reading this, maybe use a bigger venue?

If the organisers are reading this, maybe use a bigger venue?
I’d imagine it would be horridly difficult to plan for an event like this when one has never been run in the city before. From the organisers’ perspective, it would no doubt be preferable to have a smaller venue and have to turn some people away in the first year than pay more for larger one and end up out of pocket.
For those of us who pre-purchased, as the website suggested (the phrase “Pre purchase your ticket to avoid disappointment” is not always just a throw-away line), it was a tops day – plenty of excellent beers to sample and a very friendly atmosphere. As you’d expect from a sold-out event, it was pretty crowded, though, and so if you wanted long chats with the brewers then earlier in the day was the time to do it.

Apparently the event is such a success they’ve been turning away anyone without a pre-paid ticket. A bigger venue would appear to beckon for next year

We got there at 1pm and were turned away due to our lack of pre-paid tickets. So we just went to the bar at the front, had a couple of cold ones and came back an hour or so later. No worries.

I ended up with nearly 50% more beer tickets than they gave me due to the kindness of others. It was a good day.

I’d wholly echo those sentiments, New Yeah. Having organised roughly 27,000 events over the years, the last thing you want is for the sound of crickets and echos made when a place is only one quarter filled, and then the post-game word of mouth PR is all about how badly attended it was. Believe me, I know all about that!

But to have the place packed to the rafters and for the ‘house full’ sign to go up early in the piece may disappoint many punters, but the buzz it creates means it will be back literally bigger and better. Hopefully it will and it won’t clash with other commitments and I’ll be looking out for it when it rolls around again. (Dodgy freaked out headband-wearing hippie poster children notwithstanding!)

’twas a sensational day. We got there plenty early and by the time it became packed we’d sampled everything there and were ready to migrate into the bar.

Looking forward to next year already.

Based on what I’m hearing I’m betting tickets will be $25-30 next year for sure! 🙁 It always happens!

Great beers. Shame it was so packed but as everyone has said, better that than empty.
It’d be good to have the option of buying a decent size glassful of your chosen tipple once you’ve finished your tasting tickets. Those small glasses just got empty far too quickly!

Shane Miller - 37 minutes ago
This is the flow-on effect from such high housing costs in Canberra, so many people are moving out to Yass. View
Jacqueline Bennett - 2 hours ago
And you have to give the tenant 90 days notice. And if they haven't found a place in that time and moved out, then the proces... View
Clarrie Crawford - 2 hours ago
Prior to coVid, government was allowing record immigration. This didn't help the rental crisis across parts of Australia View
Food & Wine 19

Moira Campbell - 2 hours ago
Nicole Fitzgerald this is the place I was telling you about! View
Joanne Trounce - 2 hours ago
Shannon Lee will make sure we do it!🥗🥗 View
Sue Borgo - 3 hours ago
Thanks Sophia- can’t wait to try👍Sounds great! View
Property 21

Colleen Alchin - 2 hours ago
This situation is appalling! Forty minutes from the national capital and you need to buy bottled water to drink and wash clot... View
Tegan Gilchrist - 9 hours ago
Amy LD and the clothes!!! Swapped out all out white sheets for greys. Blazer ruined. I now fill up bottles of water from my p... View
Community 1

Kim Rumble-Kozjak - 3 hours ago
Jacqleequack it was all good fun until the two hour wait in the cab line, in stilettos, without a jacket in -2 🥶❄️ View
News 11

Milenko-Slavenka Jovanovic - 9 hours ago
Penny Ford Djoković is not just one of the other elite players, up to a few days ago, he was voted the players’ representa... View
Margaret Freemantle - 12 hours ago
Rosie Jennings we just don’t know- it would be handy if a copy of the advice was published View
Penny Ford - 12 hours ago
Margaret Freemantle yes that’s true. We don’t really know what he was told. Maybe he didn’t understand but a lot of the... View
News 5

Ben Keaney - 12 hours ago
Also if they are not in the numbers that the anti-brumbies say, what do you think a maximum brumby population should be? Sure... View
Ben Keaney - 13 hours ago
Di exactly how do brumbies keep the fuel load down? Do they eat fine forest fuels such as sticks and leaves? Or Perhaps its t... View
News 7

The victim of an attempted bag-snatch outside Belconnen Mall last Sunday (10 January) says her impression of Canberra as a...
Property 24

Artisanal liquor producers to be showcased at massive warehouse sale