The Perks of Being Wallflower 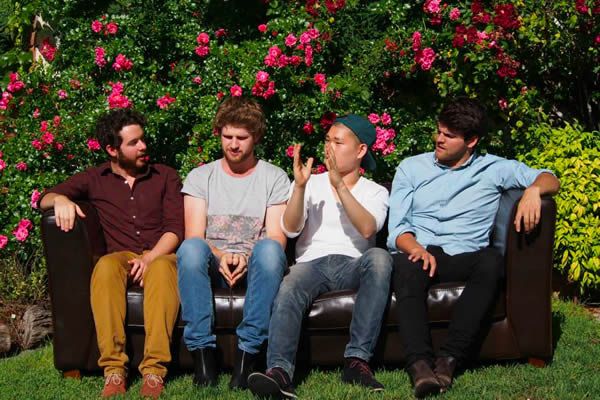 What’s it like to be part of a hip upcoming Canberra band? I sat down at Yoghurtland with Wallflower front man Henry Waldren to find out. Read on as we talk music, Ninja Turtles and embarrassing So Fresh CD collections.

So, what fro-yo toppings did you get?

I’ve got a little bit of everything in here, and some of those mango bursts, sprinkled with Milo just to make it a little bit more exciting.

How would you describe your sound?

Kind of Coldplay-esque but a little bit more electronic. Like pop music that’s been sent to outer space, washed with a dirty rag and sprinkled with artificial sweetener. I suppose we sound like Triple J music.

How did you get into music?

I didn’t really pick it up until year 11 or 12 when I chose music as an elective. I had to learn an instrument for that, and I can’t sing for crap so I picked up the guitar and started learning that. It’s really bizarre because I was really into rock and punk music when I first started, so I played a lot of the Vines and things like that, but now I’ve ended up really chilled out which is totally the opposite of what I was doing before.

How did that transition come about, from rock into chill out music?

I think it happens to everyone, you go through different phases. I used to be really into hip hop because all my friends played basketball, so I thought that was the ‘in’ to be friends with them. And then in year nine I went through an emo phase, and then it got to a point where I’d been through all the phases and I thought, screw it, I’ll listen to a bit of everything. So I listened to a bit of everything and just decided that I liked the poppy sound. I know a lot of people don’t like it, but it’s just a personal preference.

I really enjoyed your single Dynamite, can you tell me a little bit about it?

It’s a really fluttery happy song, but the chorus is actually about how easy it is to be happy being mediocre. It’s something I thought about a lot when I was overseas last year, and I don’t think it’s good thing.

How did Wallflower get together?

I used to be in a different band with Ben, so that’s how we met. The other guys in the band had moved to Melbourne, so I put an ad on gumtree to find some more people to jam with. That sounds so creepy! Anyway, Alex turned up, and he was amazing. The first time we played he got a bunch of coins and was throwing them on his drums to make, like, coin noises, so I thought he was really cool. And then one day I ran into Matt, who actually taught me to play guitar. I told him I was playing in a new band. He was keen to join in too, so that’s how we all got together.

The use of autotune can be controversial; can you explain how you use it to enhance your sound?

It was actually just going to be for one song, but we just decided we liked it, and it just became almost like the centrepiece for us. For a while I thought that was a bad thing, but now I think it’ good. Autotune can get so boring for people listening, so it forces us to do more interesting things and get some different crazy sounds going.

What are some of the things you’ve done to create a more interactive experience for your audience?

When we came up with the name Wallflower, we wanted flowers to be a big part of everything. I make stickers with flowers on them to give to people who come to our concerts. I think some people are just there for the stickers (laughs)! And then we had the idea to ask people to bring flowers to our concert in exchange for a CD. We had a bunch of people bring flowers so that was awesome.

Your name came from the novel ‘The Perks of Being a Wallflower’, what are the perks of being in the band Wallflower?

Free beer when we play! And having the opportunity to play with the guys, they’ve been playing for years and are freakishly good. They’re really good at helping synthesize what I want a song to sound like.

Tell me a little bit about your song writing process.

I’ll come up with an idea, and then Alex and Ben will come in and tell me which parts suck, and we’ll go from there. It’s hard because you can get attached to certain bits and then they come in with an axe, but it all comes back awesome in the end.

What was the first CD you bought?

This is embarrassing, I think it was one of those So Fresh CDs! Kelly Osbourne was on it.

Which Ninja Turtle would you be?

(Thinks for a long time) Rafael.

In Monopoly, which game piece are you?

At the moment, Postcards from Faraway by Coldplay.

What are your plans for the future?

We’re recording in August, and we’re applying for an arts grant to put out an EP, because it’s stupidly expensive. Hopefully that’ll be out by early next year. So until then we’ll just be writing and writing so we can make sure we have four or five awesome songs to record. We’ve just started a Pozible campaign so our fans can support us and hopefully we can all make something awesome together.

Find out more about Wallflower on their Facebook page, or support their Pozible campaign to help them record their new EP.

I caught these guys playing at Enlighten earlier in the year. They were really, really good. Shame there was only about 30 people watching them.

@The_RiotACT @The_RiotACT
St Benedict’s in Queanbeyan has been helping locals for more than 15 years, offering meals, friendship, advocacy & support to those who need it most https://t.co/l22RO7R84o (19 minutes ago)