The Phoenix is here to stay: proprietors 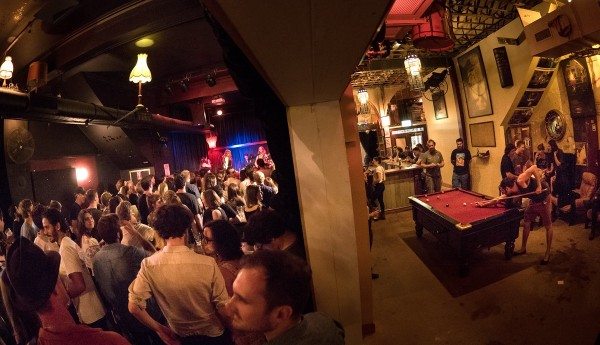 It’s 9.30am on Thursday, and my Facebook feed is already going bonkers. The rumour mill has started churning, and a few people have suggested riots. But nobody knows what’s going on. It’s all speculation at this point, as it has been in the past.

The Phoenix has been an institution in Canberra’s live music scene for as long as I can remember, so it’s understandable that everyone has lost their minds since last night, when the photos of “the letter” surfaced on Facebook. Ever since the Sydney Building fire in 2014, The Phoenix has been a concern for so many of us involved in the music scene. We came around, and learnt to love the new Phoenix for what it was, but little did we know, there was work going on under our noses, until earlier this year, when our beloved pub knocked a hole in the brick wall, and let us back into the “old Phoenix” (or at least the front bit) to remember what it used to be. But, here’s where it’s turned sour …

What’s this all about then?

On Wednesday 29 March, LJ Hooker Commercial posted in the front window of the old Phoenix, a “Notice of Termination,” which means that the Lessor has taken possession of the premises.

Stephen Royds (the property manager at LJ Hooker Commercial) has been quoted as saying “The owner of 23-25 East Row has terminated the Lease due to works conducted by the tenant (opening up the wall) causing the building to be non-compliant with the current fire regulations.”

It’s not hard to work out that this means there’s an issue with the (absence of a) fire door between the new and old Phoenix rooms, and while I’m no door expert (actually I am), the time taken to custom build a fire door and framework is longer than the time allowed in a notice to remedy breach, so you can do the math on how they came to change the locks … 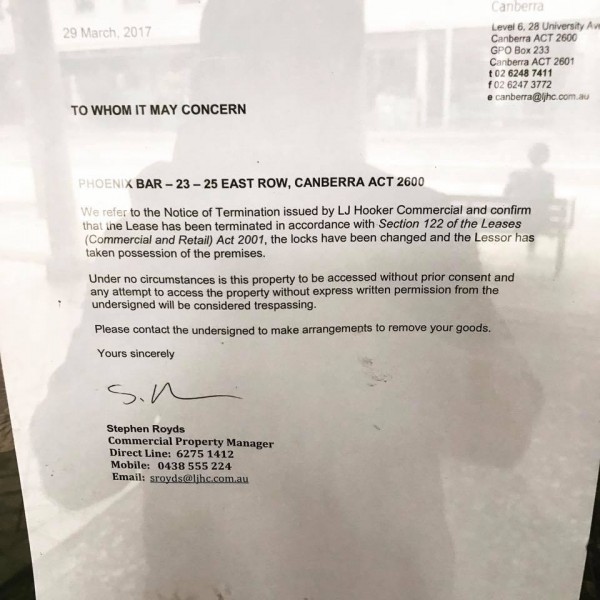 So, when can we go back for a beer?

“There’s so much we want to say but can’t because of the legalities going on,” is the official response, so at this point, it’s not 100 percent certain.

If the wall is bricked back up, the old Phoenix side will be back out of the equation as far as fire regulations (and landlords) go, and if all goes to plan, “it will be sooner rather than later”.

What this means for all of the renovation work that’s been done remains unclear, and despite the rooftop garden/food court plan that’s been floating around, The Phoenix says, “the Pub’s not going anywhere!”

Word on the street is that the keys will be returned in the next few days.

Although, “mass trespass sounds like a good idea,” says passionate Phoenix supporter Phoebe, the eternal activist, we’re just gonna have to wait a little longer for the pub and associated fire codes to be sorted. At this stage, it looks like it will open again soon, but they’ve, “gotta make sure people are safe.”

Thank f*@$! But how can we help this to not happen again? Or to any other venues?

Support the venues that support you. It’s literally that simple.

The only way they can afford to keep their doors open is your patronage. Last year was the first year since I can remember where The Phoenix has had to stay open over Christmas and New Year’s to pay the bills. I’ve already ranted about people saying “nothing happens in Canberra” here, so let’s not let that happen again, COME TO THE SHOWS!

Yeah, so people are concerned, and I’ve heard some people are meeting in solidarity and support of the pub. Call it a peaceful protest if you will, but there will be acoustic music going down on the streets. Phoenix Rising: An Acoustic Evening For The Love Of The Phoeno

Don’t forget to be good to each other, ya legends!

One Response to The Phoenix is here to stay: proprietors
Filter
Showing only Website comments

Obviously they need to follow fire regulations and requirements like other businesses. Oakland fire last year, peeps! That deathtrap happened under the watch of a “we’re too cool for fire safety” hipster.

Beretta Sambo - 25 minutes ago
No View
Phil Hopkins - 53 minutes ago
Craig Rogerson And they already get their voting from x from Reality TV Shows! View
Craig Rogerson - 1 hour ago
Of course the Greens would love this . They would be their biggest supporters . Straight out of the education system that is... View
Opinion 78

Natalia Komarova - 1 hour ago
When my friend lost her husband she said to some extend she lost her social circle as well. While she would catch up with her... View
Patrise Dowling - 2 hours ago
Nah. Get a dog. Demand free love. View
Michael Strand - 3 hours ago
So when she asks if she needs to lower her standards, what does that mean? Maybe looking at a guy is not not 6ft tall, or a t... View
Food & Wine 9

BlowMeDown - 4 hours ago
I recall my father and I taking the boat out on the western shore in the mid 1960s, where the water has yet to return. It was... View
Capital Retro - 5 hours ago
I think groundwater that enters the artesian aquifers originatesin mountainous country through rock strata. The water in Lake... View
Patrick Keogh - 5 hours ago
What percentage goes into replenishing groundwater compared to what is list to evaporation? View
show more show less
*Results are based on activity within last 7 days

A recently opened Kingston doughnut store has closed amid widespread reports it is the source of dozens of food poisoning...

ACT residents will soon be required to self-submit a report online when they are victims of certain crimes, including house...
News 66

Two reports this week have highlighted the growing housing divide in the ACT, in the rental market, and between renters...
News 31

Turn the key to family living at desirable Dunlop

Light, air and location in Lyons

@the_riotact @The_RiotACT
From #Canberra cafes and local sport, to music and birdlife, there's plenty to test your knowledge in this week’s Ken Behrens #Quiz https://t.co/H20meIMu6J (31 minutes ago)

@the_riotact @The_RiotACT
Looking for something to do in #Canberra this week? From #Christmas markets to Korean #films, here are 10 things to do in the capital https://t.co/FGRP1gEBLz (2 hours ago)