The Preacher was only getting a bit stabby, didn’t mean to kill anyone 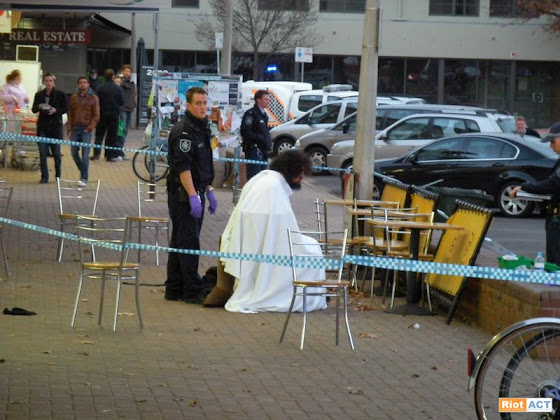 Last July we reported on a stabbing in Theo’s at Ainslie Shops by a man known to locals as “The Preacher”.

Now the ABC reports that former RAAF employee Isa Islam has offered the novel defence of saying he was just having a bit of a stab and didn’t mean to kill anyone:

Islam told the court he believed the man knew who had been breaking into his Ainslie Village room and vandalising his belongings.

He said after his neighbour refused to talk to him he just snapped and started stabbing him.

But he said he certainly did not mean to kill him, saying if he had wanted to he could have cut his throat.

We’ll have to see how he goes with that when the verdict comes down next year.

15 Responses to The Preacher was only getting a bit stabby, didn’t mean to kill anyone
Filter
Showing only Website comments

Admitting to stabbing someone? Gotta be worth a few weekends home detention in the ACT.

But if he’s homeless? Just let him go then.

Let him go? LET HIM GO? surely not! You mean find him some public housing…

Oh but it is… Mr Stabby!
http://www.weebls-stuff.com/toons/Mr+Stabby/

Is it just me or does the nick name ‘stabby’ sound kinda cute. Like it should be a cartoon.

Admitting to stabbing someone? Gotta be worth a few weekends home detention in the ACT.

But if he’s homeless? Just let him go then.

Someone better keep an eye on Capt. RAAF!

Imagine if you were born half Spanish and half Muslim, your name could be Jesus Islam…

That’s what happens when people push me, I get all stabby!

Seriously though, where’s the evidence of his RAAF history? Not any freaks like that in my RAAF, Army perhaps or as I suspect, he used to be a Pube.

Imagine if you were born half Spanish and half Muslim, your name could be Jesus Islam…

Weren’t you supposed to delete that picture JB?

busgirl, ISLAM is not a race, or even a rasce!

No, you needn’t go on you rascist.

I’ve seen this guy at a number of different locations doing his preaching thing with his headphones on. He always looked so harmless. Just your regular garden variety nutter. I guess you never know what the voices are telling them to do. I hope he gets some help.

Phew. I’m definitely going to be a little more careful next time I’m getting a bit stabby.

Is it too Spoon to say he is forking nuts?

nealg - 11 hours ago
Heavy truck traffic, lack of footpaths and e-scooters not a good mix for Mitchell. View
show more show less
*Results are based on activity within last 7 days