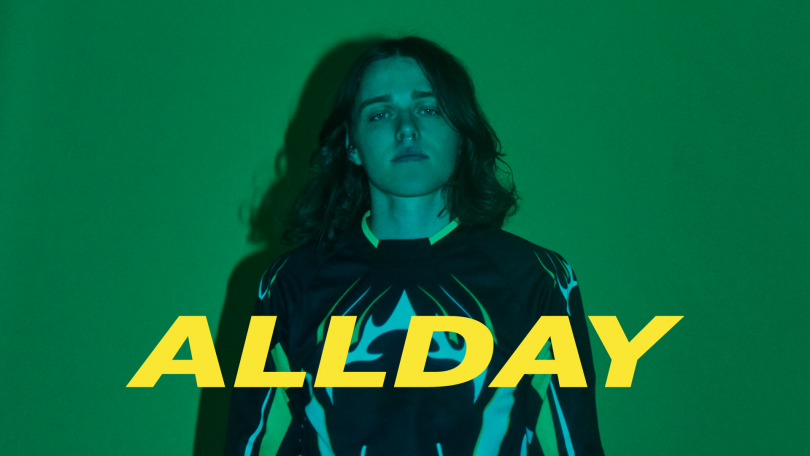 Allday will be playing from 8 pm on Friday at UC Refectory with Jannah Beth and Turquoise Prince. Photo: Supplied by Hayden Fritzlaff.

All the way from sunny Adelaide, indie hiphopper Allday will be in town promoting his new single “Wonder Drug” from the album “Speeding” at UC Refectory on Friday night from 8 pm. Playing with Allday will be local talent Turquoise Prince, along with Sydneysider Jannah Beth.

This weekend is, of course, Spilt Milk (featuring local acts such as Moaning Lisa and Peking Duk), on at Commonwealth Park from 11 am on Saturday. Find the link to the Spilt Milk website below for more details. There is a stack of other big line-ups during the week including on Wednesday night at The Phoenix featuring Jonah Myers, House of Strangers, Harrison Lambert & The Heartbreak Bandits and TD & The Rockets. At The Phoenix on Monday though is the venue’s 25th-anniversary celebrations, starring a killer lineup with Endrey, Peach Lane, Cathy Diver, Powder Blue and Jamie Leone, from 7:30 pm.

Coolio Desgracias & Housemouse will be launching their brand new single “Purdy” over at Smith’s Alternative on Thursday night, with help from The Solid Rolled Gold Dancers, Northside Swag Unit and Lulu & The Tantrums, starting from 9:30 pm. That same night the one and only Smash Mouth of “Walking On The Sun” and “All-Star” fame will be playing at the Southern Cross Club from 7 pm with Tessa Devine. Metal hardcore band I Exist will be celebrating 10 years of magic at Transit Bar on Friday night, playing with Witchskull, Potion and Bloodmouth. Then keep an eye out from 4 pm Saturday at The Pot Belly, which will celebrating 41 years of business with a huge swag of bands including Space Party, The Get Downs, Triply and much much more!

Brindie - 23 minutes ago
If paid parking was introduced at this venue, users would simply park their vehicles in the nearby streets of Wright and then... View
enjayjay - 2 hours ago
Have you been there? Its would have more participation than ANY other sport in the ACT - every single day - not just weekends... View
enjayjay - 2 hours ago
Have you even been there? Thousands of people use it every day. It draws people from all over australia and contributes milli... View
Sport 1

mathiaseverson - 26 minutes ago
Great to have Bayley as part of our team here in CBR and representing us in Poland! View
Opinion 94

willondah - 5 hours ago
Totally totally agree. Always several steps behind; always reactive. If it wasn't for Perrottet we would have been hunkered d... View
JS9 - 15 hours ago
Any actual evidence to support a claim of a 'mass exodus' to Queanbeyan to shop? There must have been some either exceptional... View
News 41

@the_riotact @The_RiotACT
The ACT has recorded 24 new #COVID cases - the same as yesterday. Earlier this morning, Federal Health Minister Greg Hunt announced that 70 per cent of the eligible Australian population was fully #vaccinated https://t.co/6nHVps2YUs (49 minutes ago)