With many of our younger readers heading off into the world to fend for themselves for the first time we thought this would be a good time to take you through the things you need to know if you’re going to stave off scurvy and impress people you’d like to sleep with, all with a minimum of cost and time spent cleaning.

First up you’re going to need tools in the kitchen. If you’re lucky your parents will give you a few hundred dollars for this purpose. You don’t need that much. 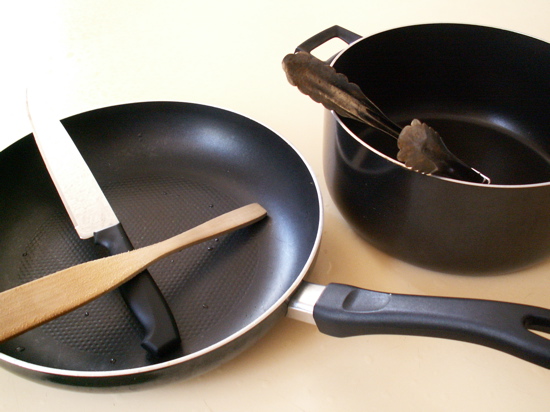 All you really need is:

There you go, anything else is wasteful frippery which will encumber you when moving and be a pain to clean.

Now take the money you saved, head down to the pub, and use it to buy a counter meal for yourself and free drinks for someone you’d like to have sex with.

Save the money spent on above appliances and head down to the pub, and use it to buy a counter meal for yourself and free drinks for someone youâ€™d like to have sex with, or your new flatmate.

Well someone’s got to teach the girls to cook too in this day and age.

Bugger that, that’s why they invented cheese and bread and grillers.

How about the process of learning to use said tools? Or is that the “more to follow” to which you’re referring?

And don’t prat about with a non-stick pot/saucepan. Bare stainless steel all the way. In non-stick saucepans lies the way to madness (and teflon poisoning). Non-stick frypan is okay, though.

Get a better knife. Mundial make a very good chef’s knife for not too much money that will stay sharper for longer. You’ll lose a finger trying to cut up a pumpkin with that thing in the pic.

Ability to cook is a subject for the interview…

In my defence, I’m a bloody amazing cook and here’s a recipe to prove it:

This recipe is great for impressing people, or if you’ve got a few blokes over and are drinking beer and watching the cricket and can’t be fussed with actually watching the food cooking. Generally it is better to pick up the pork ribs well in advance as the price goes up and down as quickly as petrol. Best price to pay is about $5 a rack

Roughly chop Onion, combine with bourbon and marinade and… marinade the ribs between 1 hour to 1 day. Place ribs onto hot grill, watch that bourbon carimalise before your eyes. When black on one side, turn over and grill for 2 mins. Turn off heat and serve when cool enough to pick up.

Best served with Carlton Draught or fancy imported beer such as Heineken. You may want to ask your flatmate to do a salad (not necessary if watching cricket).

Note: if you *do* go non-stick for the frypan/saucepan, be sure to spend an extra $2 on non-metallic tongs, unless you don’t mind flakes of teflon in your soup and/or replacing the frypan every month.

JB you should be writing books. Pure singleton gold.

Also at woolies – they have 1 piece stainless steel 20cm “hollow handle” chefs knives for less than the price of a pack of smokes. Easy to sharpen and in my professional experoence I found these knives to hold an edge for a good amount of time – a little on the light side but well balanced none the less.

i’ll back danman on the woolies knives…they hold an edge well. a decent knife is the first thing one should have, along with a sharpening stone. quitely sharpening said knife whilst others are about gets that ‘taxi driver’ respect.
i stick to disposal store cast iron, frypan 15 bucks and up to 40 for a camp oven that will do a wicked stew/spag bol etc. you do need a big pot for pasta…5+ liters. see revolve. 5 bucks if you look good.
and a $30 gas ring allows proper wok action, but nowdays i’ve given up the stir fry thing, and the barbie is king. just a fad i go through.

and piss the non stick crap off, it will not stand up to drunken cooking. cast iron is so much a better weapon as well.

Not at all in the spirit of JB’s posting but sort of on topic, I just purchased a Mundial knife block set as an engagement present for my daughter, and wondered what those out there who know about such things, think about the quality of that brand? DJs were trying to talk me into far more expensive options, and said that Mundial didn’t have the reputation they once had. There are a lot more brands out there now than there used to be when I was starting out. I bought the Mundial anyway – still seemed like a good value, quality set to start off with. Can’t stand working with crap tools!
Also, on the subject of knives – what’s your recommendation for foolproof sharpening?

In the interests of hygiene you really need two chopping boards, one for raw meat only and one for fruit/veg/cheese/cooked meats.
And make sure the knife (actually two knives is better, saves washing the blessed thing mid-prep) is SHARP.

What, no Le Creuset?

Look forward to the next one.

It’s bringing many a memory flooding back, of my poor ‘just moved out of home’ days!

crabb, mundial is ok, and with a hit on a sharpening stone once a week & a whisk over a steel each time you want sharp will give good use.
i worked in a meatworks once, and there i found what a sharp knife was…and my dad made knives. his were blunt. butchers are the kings when it comes to sharp knives. a sharp knive falls through a whole rump. about 3 times, then its blunt(er).
for a domestic kitchen, a fine stone, at about 25-30 degrees to the blade will give sharpness. caress, dont grind. it is an elusive art to get the edge, but look at the edge in good light, and experiment. meat & veggies like different edges. fine for meat, coarser for veg. but a sharp fresh knife will make food prep fun.

Mundial is entry level commercial knives – so fine for household – I also reccomend a diamond stone ( a sharpening stone you use dry – made from industrial diamonds) – I can quit eliterally shave myself with my knives after using one of these.

By the way – tomatoes – use a serrated knife 🙂

PS best knives in the world – Trident Wustorf – then Global then that asian single piece brand??

Phil Hopkins - 41 minutes ago
Enough!!! View
Mikey Moore - 4 hours ago
100 meters away the Carrington and Kingston Tower both rise to 15 stories..almost twice the height of this proposal. 8 storie... View
Mikey Moore - 4 hours ago
Julie Macklin I don't think this development is open for public consultation yet. When a DA is submitted a shadow diagram sho... View
News 22

Rauny Worm - 1 hour ago
It is a sad tragedy that there are such limited hospital based therapy options for mental illness..for young people there are... View
Anne Christoff Frampton - 6 hours ago
Jarrod Male it was very challenging but worth it. View
Tiffany Roy - 6 hours ago
Kurt Neist lol probably not any that are public. But we need to be doing better.... View
Business 5

Annie Mills - 3 hours ago
Exactly, lessons learned after these events are supposed to better prepare for the next time but it seems that there is an in... View
Sean Bishop - 16 hours ago
Daniel nailed it View
Stefan Stirzaker - 18 hours ago
Good to see the white-anting after the fact in a bid to reduce the amazingly good job done by the upper leadership and member... View
Property 7

Ian Fraser - 21 hours ago
Sure Elizabeth, but be wary of coastal ones which won't like clay soil or frosts. And be aware that the local Silver Banksia... View
Property 28

COVID-19 restrictions are easing just enough for some of our favourite Canberra businesses to re-open this weekend, with appropriate social...
Motoring 0

Police have released footage of motorists who continue to use their phones while driving - some at speeds in excess...
News 9

The man known as "Witness J" was tried, sentenced and jailed in total secrecy, during one of the most extraordinary...
Breaking 0

A woman has been airlifted to hospital after being attacked by two lions at the Shoalhaven Zoo on the South...
*Results are based on activity within last 7 days

The ACT Government has called on Opposition police and emergency services spokesperson Guilia Jones to quit the portfolio after it...
Property 30

The dream of a fast rail corridor between Canberra and Sydney has been dealt a major blow by a new...
News 22

Closure is a much sought-after state following trauma and for those still angry about the Whitlam government's dismissal almost 45...
Sport 14

For many, the thought of visiting the dentist can come with a wave of anxiety. But even when you do...
Lifestyle 12

@The_RiotACT @The_RiotACT
The proposed Coles supermarket and mixed-use development at Dickson shops has been delayed, with the supermarket giant blaming the COVID-19 crisis for not starting the controversial project https://t.co/MTGx07Y0FT (1 hour ago)

@The_RiotACT @The_RiotACT
Missing your laps session? Swimmers will again be able to take the plunge at two government-owned pools this month under the Phase 2 easing of COVID-19 restrictions. Check out the details https://t.co/jGbVuLz4Sd (3 hours ago)