The SAD Sessions – A Review 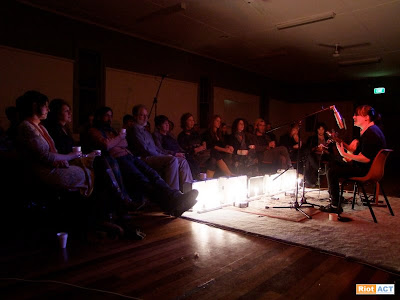 Sam King (of Mr Fibby and Ellis Collective fame) is running an unusual series of concerts on Saturday nights at the Corroboree Park hall in Ainslie.

As much a recording session as a concert the SAD Sessions (SAD standing for Seasonally Affected Disorder, a reference to the effect of short dark days) the event requires a great deal of silence from the audience, and surprisingly the hundred+ strong audience delivered.

It’s a strange concert that has half a dozen microphones running, but no amplifiers.

Possibly even stranger for a local music hosted by the Canberra Musicians Club was an absence of local performers, although the Melbourne based Tom Woodward will always be a bit of a local to long time watchers of the scene.

(It’s something I’ve been noticing lately, with Canberra’s resurgence of interest in live original music we’re getting more and more out of state or even international bands appearing on the local stages. It does create reciprocal opportunities for local bands to tour and it allows for cross-poillination of ideas, but it’s something the local organisers perhaps need to be mindful of.)

With the bar closed and the bands playing acoustically the smallest noises took on whole new meaning. Suddenly every creak and groan in the hall’s wooden floor became apparent.

$10 gets you in to see 3 bands playing in a beautiful acoustic environment. Beers are priced at $4 a can. Lovely soup was for sale, as well as mulled wine.

It’s something a little bit different and there will be two more in August. Keep your eyes peeled.

Only the front row is lit.

Very cool. I’ve been to venues like that where they even offer the cd of the show immediately after the show. Perhaps SAD Sessions can steal the idea.