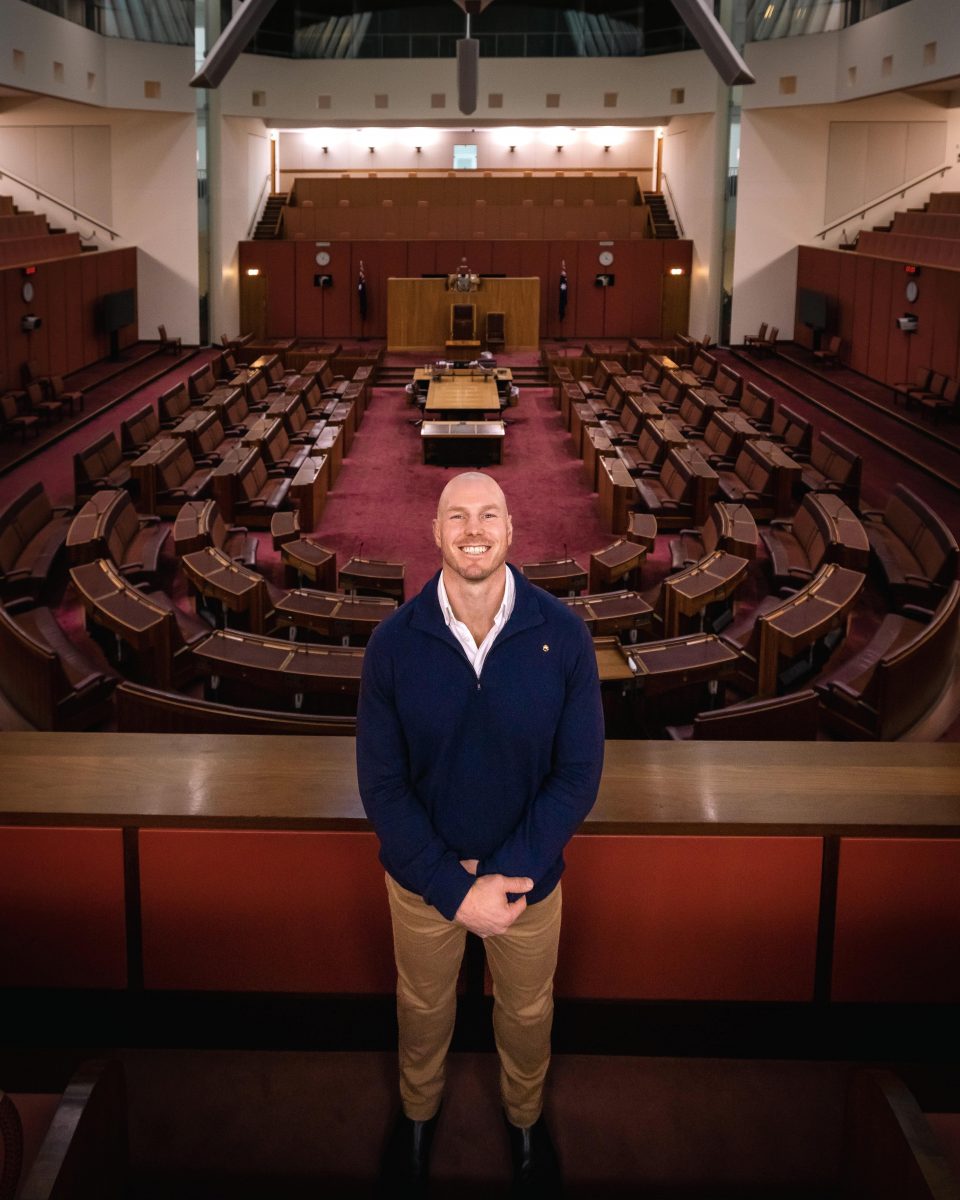 Can David Pocock make a difference in the Senate? Photo: Lincoln Magee.

The ACT community may not realise quite how unique Pocock’s position is.

The sports-loving section of the Australian community knows Pocock as a Brumbies and Wallabies rugby star.

Another segment of the community knows him for his personal commitments to inclusion and environmental action.

The more politically savvy segment of the wider community knows him now as the ’13th vote’, the extra vote which can give the government and the 12 Greens senators a Senate majority to pass government legislation.

READ ALSO After apocalyptic scenes at Splendour In The Grass, is the age of the music festival over?

What the community may not know is that within the Senate, Pocock is a rare independent senator from the centre-left of politics. Until now, independent and minor party senators have generally been from the right or the centre. Famous examples from the past include Senator Brian Harradine from Tasmania, the Australian Democrats, One Nation, and Senator Nick Xenophon and the Centre Alliance.

Pocock, like all MPs, will initially be judged on his diligence in attending to his responsibilities in listening to and serving his constituents at an individual level. There is every reason to believe he will do this well.

Beyond that, he will be judged in three areas.

The first will be the wise use of his 13th vote in Australia-wide policy areas, such as his stated advocacy for gender equality, climate action and integrity mechanisms. If he is not convinced by the government’s legislation, the government will look to Jacqui Lambie for support. Pocock must play his cards well, not lose his distinct identity or be taken for granted by the government.

The second will be his success in advocating effectively for ACT-specific areas such as territory rights, beginning with the right for the ACT to take responsibility as a territory for Voluntary Assisted Dying legislation. He will also be wise if he advocates strongly to increase ACT Senate representation from two to four senators, a policy particularly identified with the other main independent Senate candidate, Professor Kim Rubenstein.

Thirdly, like other modern independents in both houses of parliament, he will be judged by how his approach to being a senator sets him apart from major party representatives.

There is plenty of talk in this new 47th parliament about ‘doing things differently’, and Pocock, who has made a strong start, has a chance to stand out. The community involvement exhibited during his campaign must be developed further now he is in office.

Models of community involvement include the “Voices” movement pioneered by Cathy McGowan in Indi, which is now Australia-wide. Other independents, including the new Teal independents in the House of Representatives, will also offer alternative models in terms of presentation. How close he comes to these other independents will emerge over time.

The next three years will go quickly for David Pocock. Being an independent is a hard gig, bringing its distinctive stresses and strains. All the ACT community, friends, foes, and the vast majority who are open-minded, will be watching him closely.

John Warhurst is an Emeritus Professor of Political Science at the Australian National University.

Firstly, you’d have to define what “Our” expectations are.

I’m sure that there are about 400,000 different interpretations on “Our” expectations, with some having set the bar very low, with their only expectations being the defeat of Zed. Dream bigger people!

I’ll wait and see what, if anything, he delivers but let’s face it, being an Independent, he doesn’t have the ear of the Government unless his, is the vote required to get legislation passed.

I’m not convinced that he’ll meet my expectations (Katy doesn’t and neither did Zed). That said, it’d be nice if he did.

My primary expectation of the hon. Senator is that he not be a Zed.
My second wish is that he learns to play the APH game – the Brian Harradine game of interception – of stealing the ball at any opportunity so he can to favour his team – the WHOLE of the Canberra electorate in any federal matter.
That means by compromise and barter.
Of course, Pocock needs to repudiate Zed’s stance of being right in his own mind (contrary to the rightful infuriation of Zed’s electorate majority), by voting FOR any Senate measurers relating to the ACT Legislative Assembly collectively deciding about everyone’s CBR Right to Die – by ‘voluntary euthanasia’.
If Pocock does just that, he’ll be a winner.

He’s not Zed; so of course he can

You write “Until now, independent and minor party senators have generally been from the right or the centre.”. What about the Greens? Surely they are a minor party from the left. There are now 12 of them which is why Pocock is the possible 13th vote to pass legislation that labor supports but LNP does not.

The article lumps the the Greens in there like they are in coalition with Labor, which is far from the case as the 43% Carbon reductions shows. Pocock will vote based on his mandate which is environmental.

He made promises so let’s see

One quick comment about ACT rights to legislate on VAD.

The issue is about the rights of the ACT and NT to pass their own legislation – on any topic. At all. Without being over-ridden by a national Parliament, most of whose members do not live here and being ignorant of Canberra the nation’s capital.

Please = try to talk about the two levels of Australian citizens this has created and maintained.

If the debate is only restricted to the particular issue of VAD, then future conservative governments will still have the power to over-ride any Territory legislation that takes their personal fancy to dislike.

One only had to wait for the queen to pass then that whole section is nullified.

Possibly not. The head power is with “The Parliament” and remains so. The ACT and NT long ago were – originally – placed under the authority of the Commonwealth. Not now with supposed self-government – except for that residual power used by Kevin Andrews.

Anybody is better than Zed, of whom expectations were less than zero!

If he remains in touch with the electorate and advocates on their behalf at a policy level he’ll do something we never saw from his Liberal predecessor. David has principles and grit. Best of luck to him.

He has already ruffled feathers by just trying to improve accessibility. It is great to see

all he has to do is not be as appalling as the previous guy.

Hans Dimpel so he’s already doing a better job then 😂

I’m sure he will be quick to any breakdown in policy.

More injuries and sitting on the bench?

He should join the Greens and drop all the pretense of being an independent. He ticks all the boxes