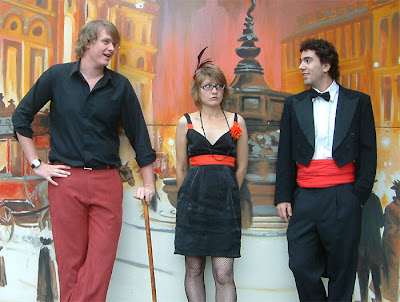 (the end of the world is nigh)

“If Stephen Fry and Trey Parker had a love child, it would be the Small Poppies.”

With climate change a hot topic and war a favourite human pastime, Melbourne comedy trio [but Canberra derived] The Small Poppies invite you on a rollercoaster ride of apocalyptic proportions to answer that burning question: How would human beings deal with the end of the world?

Some will want to give in to that old time religion, while others will just want to have sex (a lot). The Grim Reaper is overworked and underappreciated, and terrorists race against God to achieve martyrdom. Fresh from the Adelaide Fringe, The Small Poppies take the impending demise of human existence by the neck, give it a little kiss – and laugh in its face!

Hailing from Canberra, the Small Poppies (Caitlin Croucher, Adam Brody-Mckenzie, and Andrew Nichols) have performed at the 2008 and 2009 Melbourne International Comedy Festivals, and the 2010 Adelaide Fringe Festival.

But I don’t have to pay to see QI.

shouldn’t they be short poppies??

Steve Aust - 21 minutes ago
Colin Parton tell 1 story here View
Louise Flint - 51 minutes ago
James Daniels I was sent there for advice before I took a redundancy package. They ignored my superannuation and taxation que... View
Patrick Barrett - 4 hours ago
Dylan your fault View
News 22