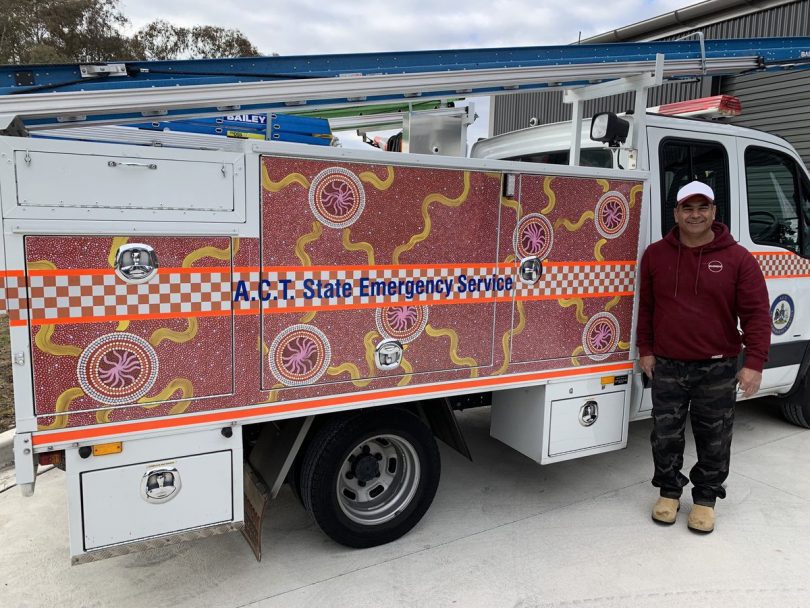 When local Ngunnawal artist Richie Allan was approached by ACT State Emergency Service to design artwork for one of their trucks, he wanted to draw something that educated the community.

He didn’t just want a truck that recognised and celebrated the traditional custodians of the Canberra region, but something that could start a conversation for generations to come.

“When ESA told me there were seven stations, I was shocked,” he shared. “Straight away we had a connection because there are also seven Ngunnawal clans.

“I thought about what colours would stand out on the side of the truck so people would turn their heads and ask what is that? When people see the truck parked, I want people to walk up and have a closer look and ask what the story about.

“That is what it is designed to do. This is not only good because SES are integrating Ngunnawal culture into their everyday business but we are actually educating people who don’t know that there are seven Ngunnawal clans.

“I wanted to create something that would have a lasting educational effect. I think that this can be the start of a cultural journey that can have a lasting effect on generations to come.”

The artwork also tells the story of the relationship between the ACT State Emergency Service and Ngunnawal land and it’s people.

“Aboriginal people have been healing the land and the land healed them,” Mr Allan shared. “We did cultural burns and sustainability practices that we did on the land but people don’t realise that we did that. We lived in harmony with Mother Earth.

“SES also go out with search and rescue and they help heal people so I wanted to put that into the context of Ngunnawal culture.”

Mr Allan said when the truck was unveiled last week, even he was blown away by the final product.

“I had the artwork in front of me but I didn’t see the full effect of it until the truck was unveiled,” he said. “It was the first time that I had seen it and I was like holy crap! I couldn’t believe it.

“People said to me, ‘you are really good at art’ but I always say to them, that I think I am really good at my culture. My culture is at the forefront of everything I do so my strong identity comes out in whatever I do.

“When it comes to art, it’s not just the artwork that comes out. It’s the cultural identity that is being portrayed. Art is about the story.”

Varalakshmi Nathan - 48 minutes ago
Not every one rides a motorcycle. My husband had motorcycle and had fallen off and had bruises. Same with my son also. We nee... View
Jeff Smith - 3 hours ago
Woody Brenden Don't think Public Transport is better than it used to be for the average Tuggeranong resident. View
Jeff Smith - 3 hours ago
Tania Shaw Too true Tania. My bus use to take 12 minutes and two stops from Kambah straight to Woden, the bus changes in 2019... View
News 11

@The_RiotACT @The_RiotACT
Baseball at crossroads as Canberra Cavalry looks to work its way out of voluntary administration https://t.co/kCS2qm5vGb (25 minutes ago)