The VANS Warped tour comes to Canberra. A review 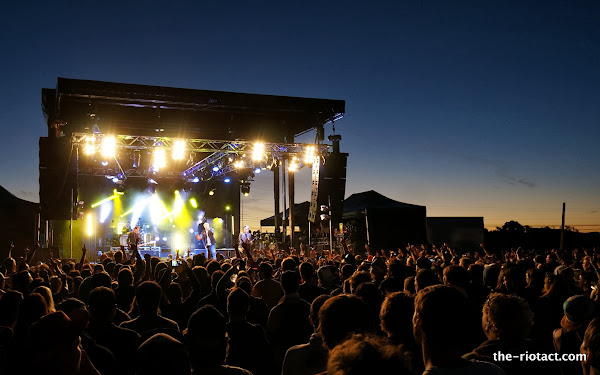 When I realised the VANS Warped tour was coming to Canberra there was no question I had to go.

If for no other reason that we all need to support major acts coming to Canberra until they get back in the habit.

And yes there was a lot of nostalgia in the lineup.

So Friday rolled around, I handed site stewardship over the Barcham, and got on my bicycle to meet friends in Dickson.

The excitement of going to a festival gains a lot of extra crunch when you find yourself in the pub at 11am on a work day knocking down a pre-show pint of Reschs.

There was some debate as to whether we’d be in the pavilions at the showground or some outside area.

In the end a touring show was going to bring its own stages and the whole festival was pretty much crammed into a couple of showground carparks.

The crowd was an interesting mix. Obviously everyone there during the day either didn’t have a job, or had a flexible job.

There were a great many neck tattoos, numerous piercings, a lot of bulging muscles in tank tops, many mohawks, and lots of beards.

Some sort of calamity appeared to have befallen women’s fashion, with shorts only being sold in the one size, which was unfortunate for the larger girls.

Despite being of formidable appearance it was a happy, polite, and for the most part well behaved crowd.

I met one arsehole, laden down with three vodka red bulls and cursing and blinding that drinking was limited to the bar area.

I saw three guys get dragged away because they’d gotten too drunk to stand (oddly enough all in white t-shirts).

Other than that a great group of people to spend a day in and around.

Reel Big Fish were, predictably, an early highlight and a great way to break up the pop-punk earnestness of many of the acts.

After a masterclass in working a crowd they finished with their Ah-Ha cover, although without the double guitar to the disappointment of many.

A sombre moment came when watching Georgia’s Veara on one of the secondary stages. Signed to Epitaph records, on the Warped Tour, one would think they were just about at the top of the music business.

And there they were, playing a car park in Mitchell to 40 people. 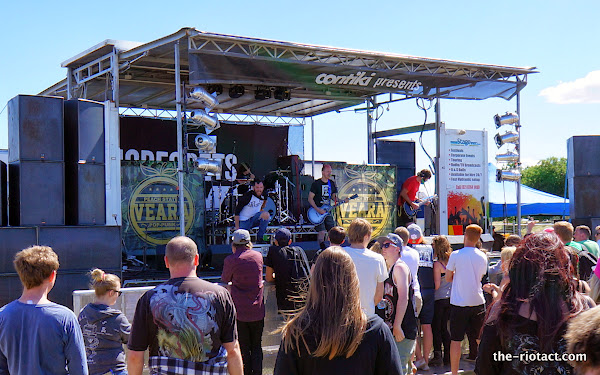 The Used were amusing in their way. Telling the fans that only they respected them, not like those other bands. A brief, but very limited, discussion of the merits of Marxism “Power to the People man!”, and a plug for secular humanism that might have better been explored in a song.

We Came As Romans were a hoot, if only for their fans dressed as Roman legionaires. (Although for some reason the sound mix was best enjoyed from the trough of the men’s bogs).

But the real highlight, the thing everyone was waiting for on a long, perfect summer’s day, was The Offspring.

As the sky turned dark the old boys tore onto the stage (their first ever performance in Canberra), played a couple of new songs, but mostly hit after hit from joyous yesteryear.

A crowd of thousands jumped up and down, sang along, and just soaked up the full orchestral glory of guitar driven rock and roll.

Some more shade would have been nice, a bit more variety in the music through the day perhaps called for, somewhere to sit other than on the ground might have helped.

But for a very affordable festival it was a great day, overall well organised, an excuse to wear t-shirts with four letter words on them, and everyone got to jump around, circle pit, skank, drink, pick up outrageous sunburn, and generally have a really good time.

Debora Gyllien - 13 minutes ago
and yet some of us who have been living here for decades and searching for support have found none. View
Perry Alopex - 2 hours ago
Nice! I can only imagine that trying to settle in Canberra would be pretty rough. It's got one of the highest costs for livin... View
Peter Manna - 2 hours ago
They will think this is paradise lol View
News 48

Aaron Nicoli - 4 hours ago
It’s also so much safer now… 60km/h jam brakes on for the camera, accelerate back out to 60… It’s achieved nothing fo... View
Phil Hogan - 4 hours ago
Got to pay for the tram 🙄 View
News 3

A few weeks ago, fellow columnist Ian Bushnell wrote about the proposed residential/aged care development on Cotter Road that will...
Opinion 22

@The_RiotACT @The_RiotACT
ACT Health has reported 17 new cases of COVID-19. There are 17 people in hospital with COVID, including nine in intensive care https://t.co/1Bc2I9mRsp (1 hour ago)