The Wharf Revue at the Canberra Theatre, Whoops! a review

Having been invited to opening night of the Wharf Revue at the Canberra Theatre Goosepig and I negotiated the obstacle course of the Spiegletent sprawling across Civic Square and took our seats in the Playhouse.

It’s a one act show running 90 minutes and I have to say it’s superb.

The comedy ranges from broad and childish to very carefully nuanced.

Amanda Bishop was a glittering diamond but the blokes were excellent.

The use of body language to open the impersonations was brilliant. Most of the characters being satirised were obvious before their first line.

Both sides of politics catch it so even the partisan should enjoy.

A word of warning however, if you never watch Lateline, 7.30, or QandA it might be you’re not the audience for this.

In parts the entertainment derives from familiar tunes being mixed with familiar ideas in new ways.

But the brilliant extended Rosencrantz and Guildenstern segment in the middle of the show was worthy of the greats (including a hilarous “why are you acting like John Bell” moment, and a star turn of Bill Shorten as Hamlet).

It’s only running here until the 19th, but if you know what Chris Pyne sounds like then it’s a great night out in my favourite Canberra theatre, The Playhouse. 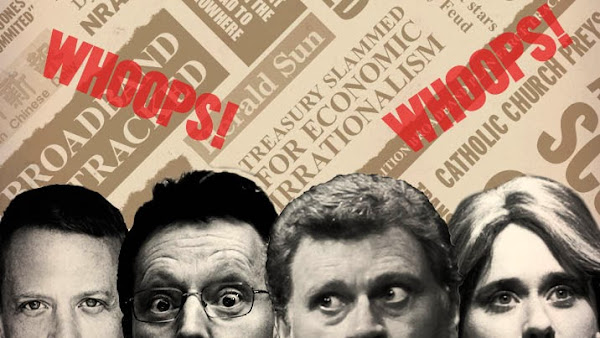 One Response to The Wharf Revue at the Canberra Theatre, Whoops! a review
Filter
Showing only Website comments

Completely agree. Slow to start, but that Rosencrantz and Guildenstern skit was absolute satirical perfection.

Kirrily Bowler - 19 minutes ago
There’s a great podcast about this. Spoiler: It did not end well ha ha ha... View
Colin Butcher - 1 hour ago
Freeze a jolly good fellow. View
Juliana Vallejera - 2 hours ago
I defrosted a chicken the other day. Sadly, upon defrosting it did not regain the ability to cluck or lay eggs. 😥 View
Opinion 184

Lou Phillips-Critchley - 27 minutes ago
If it has to change, what about Australian citizenship day on 17 September each year. The day is intended for Australian citi... View
Rowan Hartcher - 15 hours ago
Alan Hopkins like wise View
Peter Quinn - 16 hours ago
So when can we celebrate colonisation????. Whatever day is nominated it will always be contested View
News 10

Bradley Heanes - 18 hours ago
Didn't the defence department already appologise for this? (Even though they were assisting the RFS at the time) Didn't they... View
franky22 - 20 hours ago
Why can't the ADF simply state that they made a mistake. View
News 21

Julie Macklin - 22 hours ago
Mark Katalinic Likewise why not use the roads for car racing? No, silly suggestion, as is yours. View
show more show less
*Results are based on activity within last 7 days

A Belconnen GP surgery was forced into lockdown yesterday (21 January) over concerns that a patient had recently been to...
Community 24

Corunna Farm at Corunna is one of those rare properties which represents a generational opportunity for a landmark holding on the...
Community 24

@The_RiotACT @The_RiotACT
This week’s newsletter covers everything from a sumptuous Lebanese breakfast spread to algae in Canberra’s waterways to lively discussion around Australia Day https://t.co/hyR7zinwv6 (12 hours ago)

@The_RiotACT @The_RiotACT
Red & purple are the new black according to a group called the Red Hatters who provide encouragement + empowerment to women in Canberra https://t.co/nuHKJ26rGA (13 hours ago)