Here in The Eagle’s Nest we maintain that zombies have well and truly jumped the shark.

But not everyone has our keen eye for the zeitgeist and hey, we can always do zombies ironically right?

In any event the efforts to make a zombie movie here in Canberra are coming along and their fundraising page reports that with four days to go they’re just $1,400 short.

If you give enough you too could have your name in the credits of a locally made zombie film.

And what else are you going to do with your life more important than that? 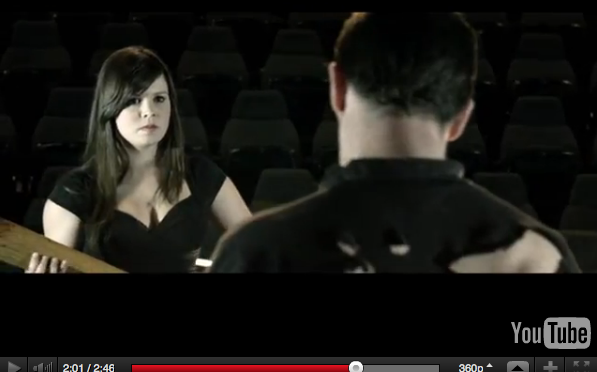 Then order another from Tilleys and give your staffie a drink while you’re at it!

i know where you could get some extras. There are a couple of shelias rampaging around the place. They have shown a passion for biting tall dark types. Last seen either at the Woden Plaza or not wearing a seat belt.

I know a lot of you have enjoyed my Lights! Canberra! Action! short films in the past, and as the Writer/Director of “Theatre of the Dead” I’m hoping some of you will be willing to give our film a chance if the opportunity arises to check out the final product.

Yes, we’re doing a zombie film. The genre obviously doesn’t appeal to everyone as some of the posts here would attest. But the genre definitely isn’t dead, no matter what you personally may believe. Zombies still have a large and rabid fanbase, which is what we’re hoping to tap into.

A lot of local filmmakers are pooling together to make this happen, and we’re hoping that this won’t be the last feature to be brought to fruition by this group. So, if you like the zombie genre, and horror films in general, feel free to give us some support 🙂

And before anyone raises the issue, this film is being made entirely with private funding, no government money involved 😉

Yep, well and truly have underpinned the Fonz.

I know what four little boys would say………..They are the demographic.

I assumed it would be a comedy, but the tone here is dark and seemingly non-ironic. I was expecting Shaun of the Dead in Gungahlin.

JB, some of the violence in this might be seen as a little much without a warning; the little girl Zombie being taken out by a piece of wood for example, or the first body eating scene. Some Rioters are pathetic wimps you know.

Capital Retro - 5 hours ago
You can't help bad luck OI L. View
Capital Retro - 7 hours ago
Home batteries generally are duds: https://www.solarquotes.com.au/blog/battery-test-centre-reports/?utm_campaign=sq_news_week... View
Ol L - 9 hours ago
Interest free but still a loan. And who would want a second hand EV given their finite batteries? And yes I do own one. View
News 12

JC - 6 hours ago
So true. It’s far easier to whinge about anything and everything. Though think the core issue is many here just don’t lik... View
Jay Bee - 9 hours ago
I cannot believe the negativity on this site. So many critics, and not a constructive suggestion between them. What is there... View
bd84 - 9 hours ago
Another Barr Government “we’ll just stick it here” project. They’re closing off Callum street and effectively putting... View
News 2

franky22 - 6 hours ago
Well I for one will not miss them. I lived in Sprent St & found the peacocks annoying. They are an invasive species just like... View
ChrisinTurner - 7 hours ago
Residential streets should be 40 km/hr or even the European 30 km/hr, now that 40 km/hr is being applied to parts of Northbou... View
Opinion 8

chewy14 - 11 hours ago
Dolphin, The Greens will never be a realitisic alternative whilst they refuse to deal with reality when determining their pol... View
dolphin - 22 hours ago
its not hard jwinston, just look at the libs and you understand why. they are just too socially conservative for most of us.... View
HiddenDragon - 24 hours ago
"....The question now is making it work and be accessible to as many Canberrans as possible..." No, Zed, the question is and... View
News 31

Kristine Evans - 20 hours ago
Andrew Barr Then you need to let parents into schools before this happens. View
Christopher Marlowe - 22 hours ago
Jenna Vdv that's why HECS/HELP exists View
Rod Phillips - 23 hours ago
I'd like to see a bit more planning and less guessing all round! We've seen the impact of poor quarantine procedures through... View
Community 1

Canberra’s newest farmers market opened to throngs of people on Sunday, 7 February and its popularity continues to grow. The...
Breaking 0

@The_RiotACT @The_RiotACT
Running seven marathons in seven states in seven days will be uncomfortable says Kaiti Penrose who is one of six runners in the region taking on the Bravehearts challenge to end childhood violence https://t.co/Briu2xeOMC (31 minutes ago)