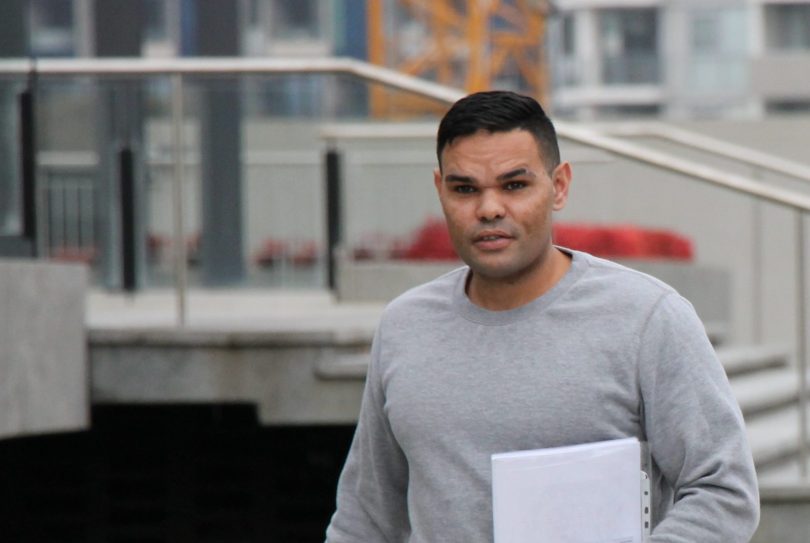 Jonathan Monaghan, 31, outside the ACT Courts after his sentencing on Wednesday. Photo: Albert McKnight.

After robbing a man who had just donated to a charity bin on Christmas Eve, Jonathan Monaghan stole a bushfire evacuee’s car during the disastrous 2019-2020 fire season.

Monaghan, 31, has avoided spending further time in jail after he was sentenced for a string of crimes that ended when he crashed the stolen car into police vehicles.

Court documents show that during the height of the Black Summer fires, a woman packed her Mazda 2 full of treasured possessions and basic survival gear in preparation for an emergency bushfire evacuation.

She parked it on a road in Canberra’s northern suburb of Melba on 5 January 2020. But the next day, she saw it had been stolen.

Earlier, Monaghan’s first victim had driven to the shops in the Canberra suburb of Hawker very early in the morning of Christmas Eve 2019, intending to donate clothing to a charity bin.

But as he took the clothing from his boot, Monaghan approached his car and reached through an open window to take the man’s wallet, which contained almost $750 in cash.

He told his victim, “Don’t come to me”, as he jabbed a rusty knife with a 20 cm blade in his direction.

After the man yelled at him to just take the money and leave the wallet, Monaghan took the cash, threw the wallet on the ground and fled.

Monaghan’s crime spree came to an end late in the night of 6 January 2020 when police saw him drive the stolen Mazda 2 into a service station in Watson, north Canberra.

Two police cars parked in front and behind the Mazda, but Monaghan drove the stolen car into both of them in an attempt to escape. The car was later returned to its owner.

On 14 May, prosecutor Sofia Janackovic told the ACT Supreme Court Monaghan was a recidivist who had been assessed as having a high risk of reoffending.

She said he had been given opportunities to help with his drug addiction “time and time again” but had a “relatively contemptuous” attitude towards rehabilitation.

Ms Janackovic said the aggravated robbery was a “particularly grave offence”, and he had stolen from “a victim who was donating at charity bins”.

Acting Justice Richard Refshauge said Monaghan did show “a tiny spark” of empathy when he took the cash, as he had thrown his victim’s wallet back to them.

“Shouldn’t we gently blow on it to try and get it into the roar of a great flame of empathy?” he said.

Justice Refshauge said Monaghan had described himself as having a normal childhood with lots of drugs, alcohol and violence.

“That’s not a normal childhood I’d recognise,” he said.

Monaghan also testified he used to take methamphetamine and alcohol, and was taking a gram a day of methamphetamine before he was arrested, but had not used the drug for about a year.

Monaghan, wearing thongs and socks, was sentenced to four years’ jail in the ACT Supreme Court on Wednesday (15 June), suspended for a two-year drug and alcohol treatment order followed by a good behaviour order for the remainder of his sentence.

He was ordered to go to the Canberra Recovery Services that day to complete a drug rehabilitation program.

Justice Refshauge said Monaghan had spent 394 days in custody over the crimes and had practised art while behind bars.

He said he had a “strong and entrenched drug habit”, particularly when it came to cannabis and methamphetamine, and had committed a total of 93 offences – which was “a very depressing criminal record for a man of his age”.

Justice Refshauge encouraged Monaghan to reform and seek help under the drug and alcohol treatment order when he needed it.

“You’ve got a shocking record, haven’t you?” he told him.

“You don’t want to be in and out of jail. This is the opportunity to really help you do that.

He had pleaded guilty to aggravated robbery, dishonestly driving a vehicle without the owner’s consent, failing to stop for police and unlicensed driving, and was also found guilty of dangerous driving.

“Justice Refshauge said Monaghan had spent 394 days in custody over the crimes and had practised art while behind bars.”

I’d prefer my taxes paid for education, rehab programs or he learned a trade while locked up.