Think you were born smart? ANU research shows that blue-tongue lizards really are 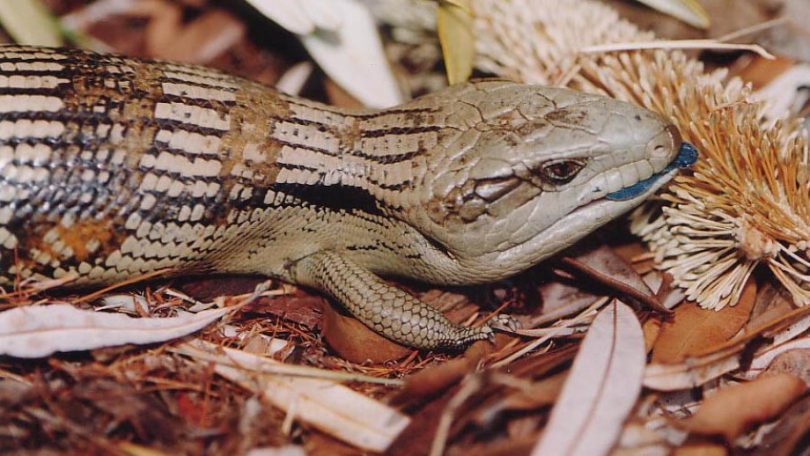 We say that some people are ‘born smart’ but new research carried out mainly at the Australian National University shows that it’s really eastern blue-tongue lizards who are born with adult-like learning ability.

And while human babies with the highest potential intelligence still have to learn to walk and talk, the baby blue-tongues must fend off dangers without help from their parents from the moment they are born.

“It came as a bit of a surprise that they were learning at the same level as the adults,” said Daniel Noble from the ANU, one of the authors of the study which has just been published in the journal Animal Behaviour.

“After giving it some thought, however, it became clear that these juveniles’ advanced state at birth helps them to fend for themselves without protection from their parents. They need to be as smart as their parents to survive.”

The recent study is the first to directly compare juvenile and adult behavioural flexibility in blue-tongue lizards.

Eastern blue-tongue lizards are considered an extreme case of a ‘precocial’ animal – meaning they start life ready to face the challenges on their own and with little or no parental care or protection. Some other reptiles are also precocial animals, along with some birds and fishes.

By contrast humans, and many other animals, are considered ‘altricial’, meaning that juveniles need to be taken care of by their parents until a certain point in time when they can go off and live on their own.

Scientists have apparently long wondered whether precocial animals are as developed in their ability to learn as they seem to be in other aspects of their life.

The recent study found that juvenile blue-tongue lizards do have adult-like learning ability – no doubt giving them the edge they need to survive by themselves given that their parents desert them as soon as they are born.

Juvenile blue-tongue lizards face many dangers during their first weeks of life (and beyond). They may encounter predators for the first time, have to figure out where to sleep and what to eat. Because they are solitary lizards, they can’t normally learn from other lizards. This may be why having such good learning abilities at such a young age is so important.

Interestingly, the study found that juvenile lizards are also as flexible as their parents when it comes to learning something new. Given that in nature animals often face changes in their environment and need to adjust, this is likely to also increase a juvenile’s chances of survival.

“Our results are consistent with what has been found in chickens,” said lead author Birgit Szabo from Macquarie University.

“Chickens are considered very precocial birds and learn more flexibly than their mums.

“Lizards can now be added to the list of precocial animals in which juveniles get a head start thanks to their smarts.”

Interesting read. This one I cut out of chicken wire it was stuck in. Its thank you was to stick its tongue out at me, although that might have been because of having a camera stuck in its face 😆. When I found the blue-tongue, it was limp and hanging and I thought it was dead, but obviously not.