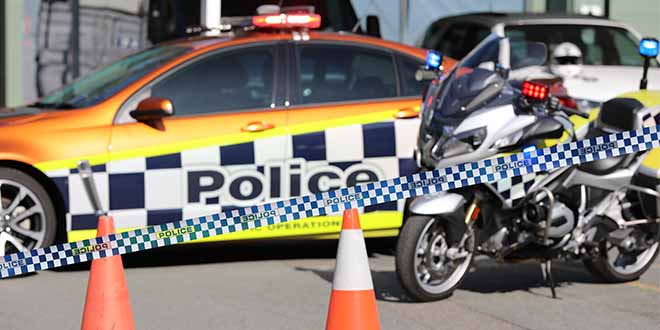 A Canberra man accused of driving into three police officers, including two who had only just started their careers, trapping one underneath his car, has been charged with attempted murder.

ACT Policing said the officers were conducting a routine traffic stop near the National Arboretum at about 2:50 pm on Sunday (11 July) at the intersection of Forest and Lady Denman drives.

The officers had stopped a Toyota Aurion and were standing off the road in front of it when police allege a Ford Laser sedan was driven directly at them.

The experienced officer, a male Detective Leading Senior Constable, was thrown onto the bonnet of the Laser and hit the windscreen before landing on the ground in front of it.

The two female constables, who had graduated about four weeks ago, were also struck.

One was thrown onto the bonnet of the car before landing on the ground. Deputy Chief Police Officer Commander Michael Chew alleged the other was “run over” by the car and became “pinned” under it.

He said this constable received a “quite severe” compound fracture and multiple fractures to one leg and would required surgery at a later stage.

The male senior constable suffered back and head injuries and is undergoing assessment at Canberra Hospital, while the other female constable was also injured. 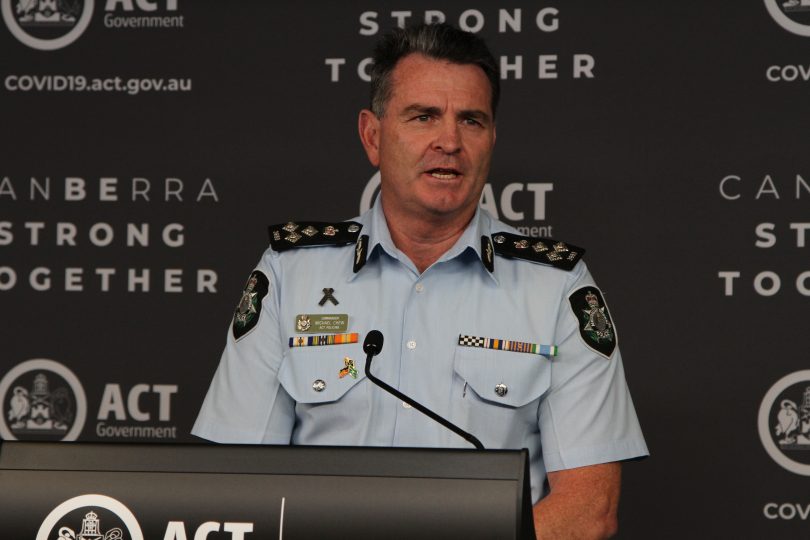 Deputy Chief Police Officer Commander Michael Chew said the two constables were new to ACT Policing and were being trained in traffic procedures.

“They remained calm and acted appropriately during what would have been a terrifying situation,” he said.

“I have nothing but praise for the actions of all three officers.

“I would also like to thank the driver of the Toyota Aurion who didn’t hesitate to assist our officers, along with two other members of the public, to move the vehicle that had trapped the officer.

“All three officers will receive welfare support and assistance during their recovery from their injuries.”

Mr Matthews, a balding man with a long brown beard, appeared over audio-visual link in the ACT Magistrates Court on Monday (12 July) but did not apply to be released from custody on bail.

Prosecutor Anthony Williamson said Mr Matthews also faced charges of arson and attacking a police officer with a weapon. Mr Williamson asked that the bail he had been granted for those two charges be revoked.

Magistrate Cook revoked the bail and remanded Mr Matthews in custody to appear in court again on 2 August.

No person should be subject to the threat of someone deliberately driving a motor vehicle at them. I must note however that if someone drove deliberately at Joe Blow crossing at a pedestrian crossing the response would be of somewhat less importance.

I’m sorry that this site continues to provide news. It must upset you that all people are able to have their stories heard .

Unbelievable. Thomas Matthews Prime muppet. You have no right being on my streets. Questionable whether you add any value to our city, territory, or the planet. Snuff.

Monica Tiffen - 47 minutes ago
They are so lovely, Butsome really worry me Swaying in the wind over Homes! View
Rowena May - 52 minutes ago
and when people express their concerns the govt says no you can’t cut them down….. but hmmm the Northbourne Ave ones were... View
Greg Myat - 1 hour ago
Still it would be a shame to cut everything down due to a once in how many years event. View
Community 47

Peter Miller - 60 minutes ago
Peter Rudd agree agree agree. The govt needs to review street tree policy urgently.... gums are not a good choice. View
Zoe Lewer - 11 hours ago
Bob Foster yep. Us humans sure have made an impact. We are the problem. You are right. The day the people who were invaded ch... View
Joy Gosden - 11 hours ago
Yes. What were they thinking planting them in our suburbs. They drop limbs attract pests and stop grass growing around them.... View
News 319