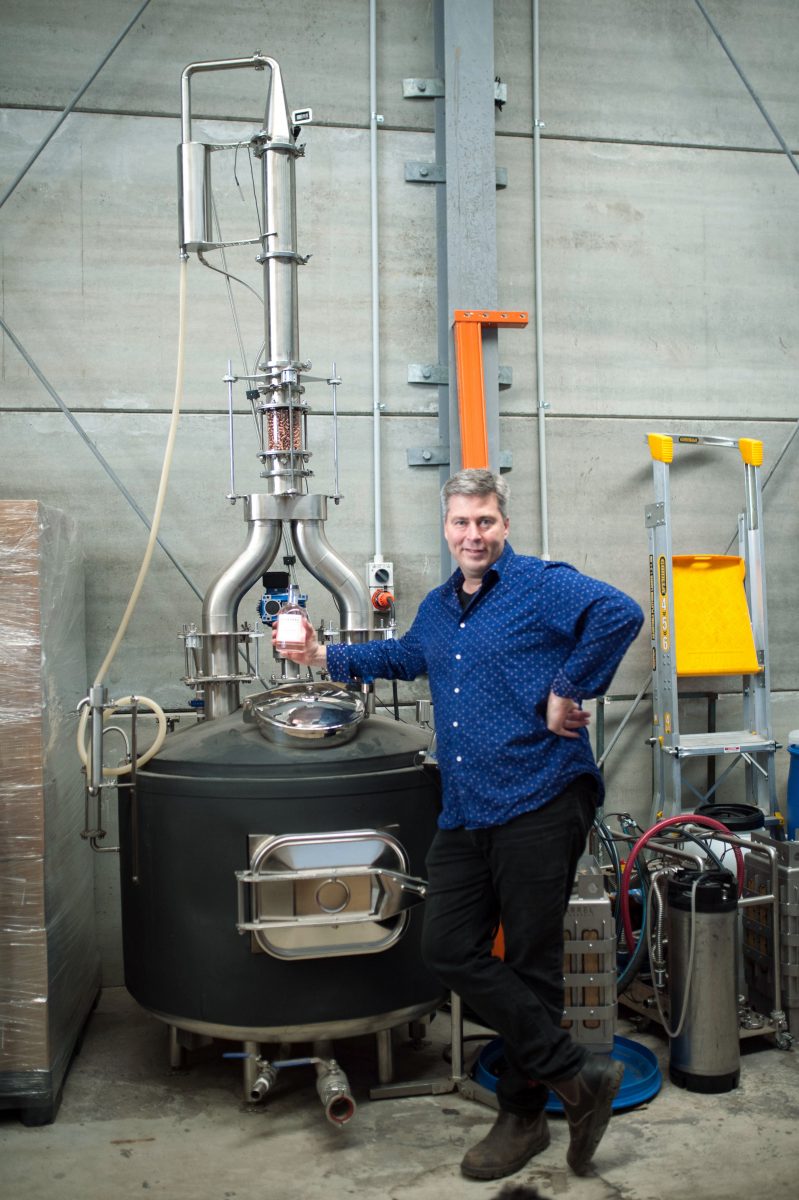 Tim Reardon with his still, where the magic happens. Photos: Michelle Taylor.

“That’s part of the fun when you create flavours. People don’t tell you what it tastes like, they tell you about a place or a time that the flavour reminds them of …”

I have been in raptures explaining how Tim Reardon’s musk liqueur transports me back to my grandmother’s stash of musk sticks.

Tim is walking me through The Canberra Distillery’s new space out at Mitchell. Blood-orange-infused gin is everywhere, in containers, being bottled, being labelled.

“We are madly making it as blood oranges are only available for a short time and we need to make enough for the year,” he explains. 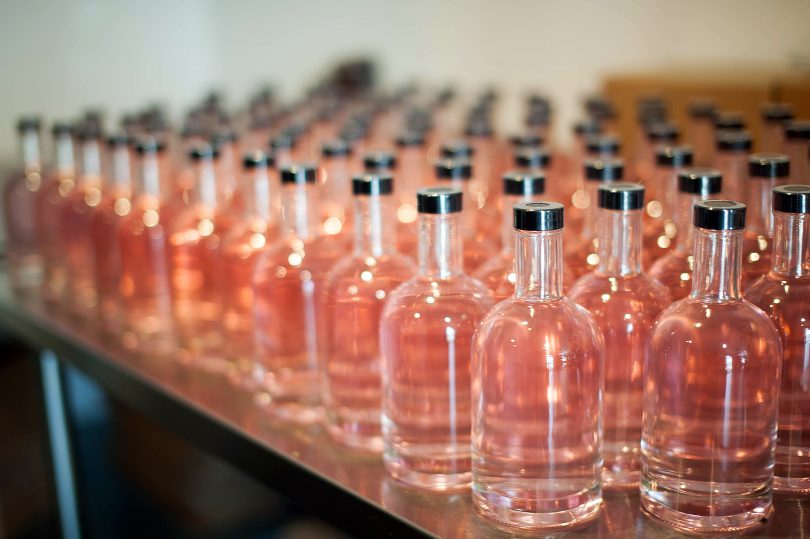 The frisson of having so many products in different stages of their development reflects the trajectory of Tim’s gin journey. After volunteering to help a friend set up a distillery in Tasmania five years ago, his simple curiosity in the process took him down the rabbit hole and adventure followed.

“I couldn’t fathom how it worked. It didn’t make sense to me so I bought a still and played around, fermenting, brewing. Fermentation is a tricky part of it and people skip over that part.”

Tim is not skipping over any parts. His attention to detail is precise and he knows his stuff. He shows me all the yeasts he uses and points out which spirits they make. His description of the distilling process is magnificent. 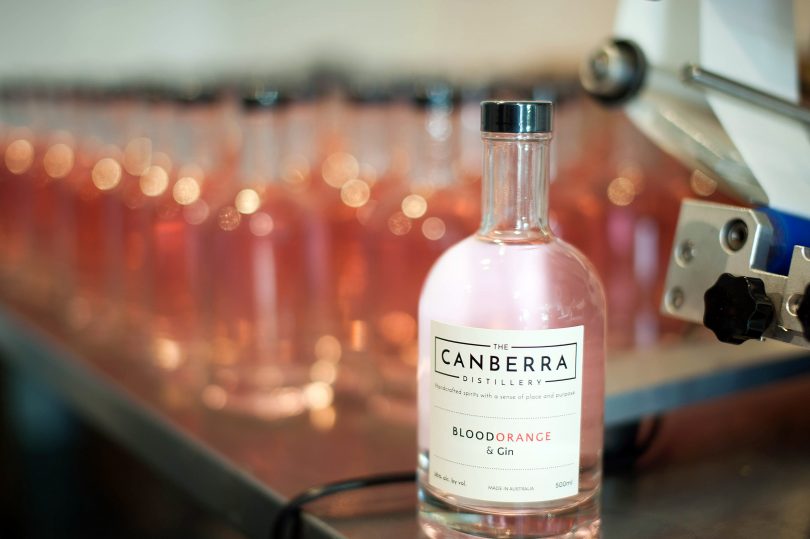 Bottled, labelled, ready for the customer.

“I didn’t ever intend to start a distillery,” Tim demurs. “It’s just what happens when you solve all the mysteries of a still. The point at which I went pro, two things happened: one was that my mum tried my gin and liked it; the second was the budget announcement, the small business tax concession, meaning I could immediately write off the cost of a still.

“We made our first batch – 50 litres – and I thought I would be giving it away for Christmas the following year. But it’s been three years of peddling flat out to keep ahead of demand. Canberra has been good to us.”

As he said, Tim loves to play with flavours, infusing his gin with different botanicals.

“It’s all about subtlety. Part of the art is not having a dominant flavour. There is a lot of diversity for the consumer as the distiller can play with so many flavours: floral botanical, sweet and savoury. Gin’s holy trinity for botanicals is juniper, coriander and cardamom.”

He shows me his first gin, the London Dry: “I used a puritan approach, seven classic botanicals in a dry gin.” 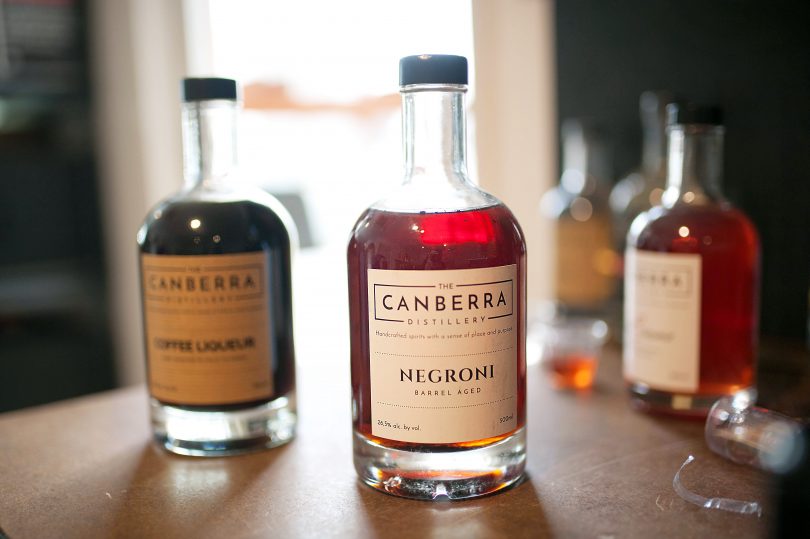 A small selection of products available from The Canberra Distillery.

He holds up a second bottle, Summer Gin: “This is a modern Australian style. It has over 30 different botanicals, including a whole range of native botanicals. It’s what I think are all the Canberra summer fruits: strawberry, raspberry, blackberry, passionfruit, hibiscus, native strawberry gum, wattle seeds, mountain pepper berry, so many complex flavours. This is all the things I’ve learnt along the way rolled into one.

“There is a bit of a gin renaissance happening,” Tim says, but he knows that it will not last. He is already anticipating the next big thing in spirits and is working on diversifying his still skills in the meantime.

Tim has given me the green light to reveal that he is ageing whiskey! 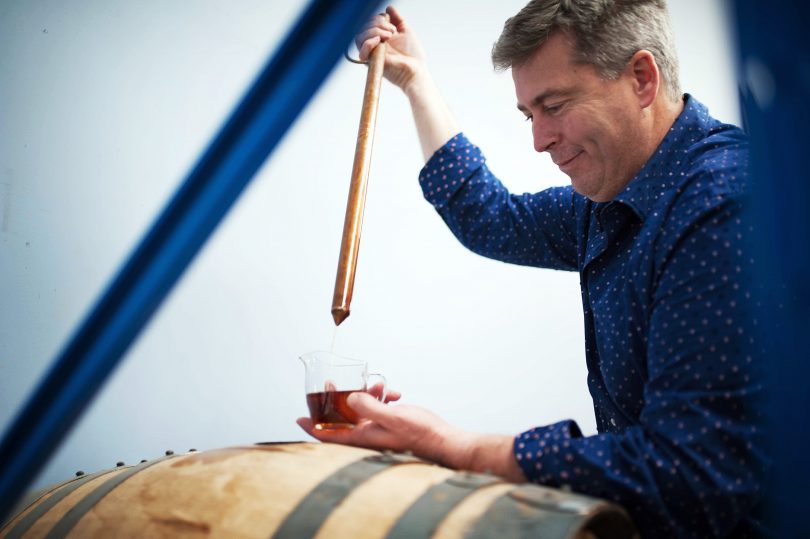 Rum is also in the works; some has been ageing for as long as Tim has been distilling.

Within the year, The Canberra Distillery hopes to have moved completely to their larger working space in Mitchell.

He is grateful for local partnerships, like the one he has with Robert Krnc out at Supergrocer in Fyshwick’s Canberra Outlet Centre.

“We’ve relied on the independent bottle stores for distribution. For them, dealing with little distributors like us is harder than dealing with big distributor businesses, so we appreciate the time and effort they go to source local.’

At present, the Canberra Distillery distributes to Sydney and Singapore, with opportunities to distribute to other Southeast Asian countries opening up. 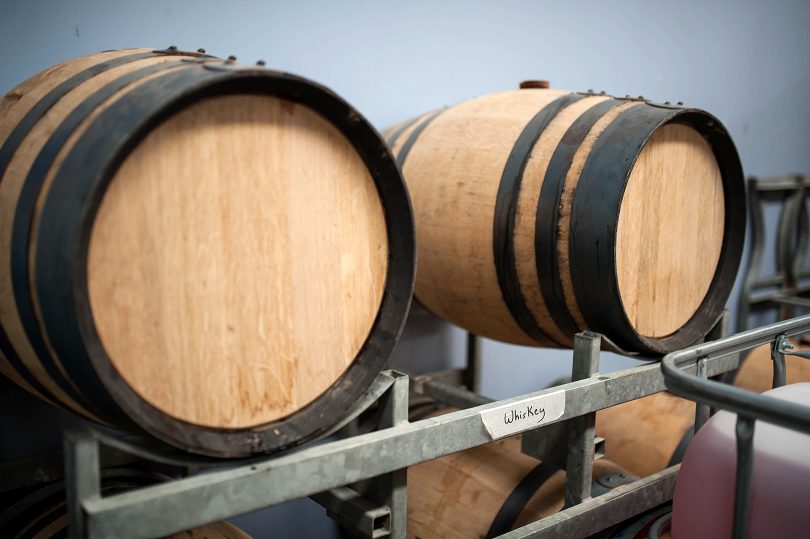 Whiskey being aged in barrels!

Tim says they are changing their model of business.

“At present, we produce and sell our gin wholesale. We are looking to move to the brewpub model where you produce in one spot and sell it out the front.”

Reams of red tape stand between Tim and his Mitchell brewpub, but his vision remains clear. He walks me through the future front-of-house, tasting room, and the function/restaurant space overlooking the distilling area where the public can come to dine and drink. 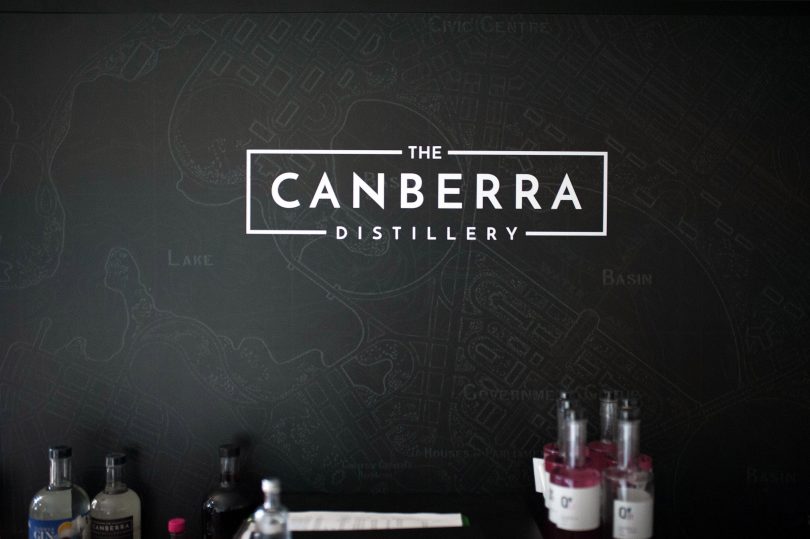 The Canberra Distillery is expanding its range and premises.

I can only believe that The Canberra Distillery brewpub will be here sooner than we think. Why? Because Tim possesses the holy trinity of a distiller: the mathematical precision and attention to detail and process, the curiosity to keep testing the boundaries and the developed palate.

Find out more about The Canberra Distillery at their website or on their Facebook page. Supergrocer is located in the Canberra Outlet Centre, Fyshwick.

Robyn Holder - 50 minutes ago
Get out of here Coe. You're rubbish, the same as the federal mob. View
Bethany Williams - 8 hours ago
Charlie McDonald agree! That’s why the Canberra Progressives are going to run lots of candidates at the Oct election (full... View
Jane Kim - 9 hours ago
You could not reach our expectations in a million years, Alistair! View
News 151

Richie Suryadi - 3 hours ago
Be good if they got the first stage right in the first place View
Keith Prinn - 8 hours ago
Queanbeyan needs this more than anything View
Alan Dalling - 12 hours ago
Jorge Garcia no it's not. Stage 2 will nearly double the commuting time between Woden and Civic. Will remove a couple of hund... View
Opinion 26

Michael Roy - 14 hours ago
Amanda Evans an example of one of the failings of a dendritic road network. View
Randy Goldberg - 2 days ago
Matthew Beale Guess I don't travel Parkes Way sufficiently to always see them. View
Shayne Borger - 2 days ago
Canberrans have become a city of whingers and have nothing good to say. Being active and healthy and sport tourism brings $M... View
News 78

Jeff Smith - 1 day ago
Nailed it! If the ACT Government employed active and skilled inspectors to properly audit buildings during construction we wo... View
Rohan Peek - 1 day ago
If they were built properly in the first place the strays and body corps wouldn’t have half as many issues View
Jean Hardy - 2 days ago
Vicky, are you formally exx manger from pacific place appartments View
Opinion 1

High spirits in the Jingera hills

The Best Places to Get Your Truck Financed in Canberra

Stop the presses! Canberra now has its own sparkly colour-changing Unicorn Vodka …

The Best Places to Get Your Bike Financed in Canberra

@The_RiotACT @The_RiotACT
Under police escort from #Bungendore to #Canberra, a humble fridge received a hero’s welcome when it arrived at @nma today https://t.co/BojPcIj9kU (45 minutes ago)

@The_RiotACT @The_RiotACT
Worried about bikie violence? A new report says the threat in the ACT is exaggerated, with only 1 per cent of crime in the Territory committed by gang members https://t.co/TXzeFVNUSE (4 hours ago)