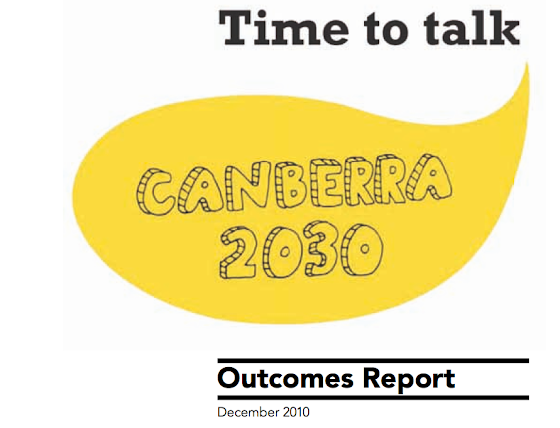 In a busy morning Chief Minister Stanhope has announced that he’s released the outcomes of the Canberra 2030 consultation.

Canberrans want a more compact city that will better support a public transport system and deliver a better mix of housing across the ACT, according to the outcomes of the Time to Talk – Canberra 2030, which were released today.

“Canberrans have told us in their tens of thousands how they want their city to look in 20 years’ time and now it is up to the Government to ensure those opinions are included as we plan for the future,” Chief Minister Jon Stanhope said.

“One of the interesting perspectives in Time to Talk is that the community acknowledges that future development in existing areas will increasingly need to take place close to our town centres and transport links.

So no big surprises then.

With questions like:
‘would you prefer urban infill around transport corridors, OR massive rate rises and huge pollution?’
it isn’t surprising they got the answers they wanted to hear.

I still can’t find out what a transport corridor is. Dickson and Woden presumably, going by where the developers are building.

Survey also found that people think you should be nice to your mother and wash your hands regularly.

If any of that analysis is based on that appalling web site then it’s nothing but a crock of shite.

There were holes in the site design big enough to drive the Queen Mary through.

Mr Stanhope said one of the biggest successes of Time to Talk had been its ability to engage with all age groups in Canberra, including the younger residents.

It would be nice, Mr Stanhope, if one of its successes was as a planning document for the future of the city.

It does amaze me sometimes that the Government has to ‘engage’ the ‘community’ to figure out that people “wanted to ensure Canberra had a clean and healthy environment“. Did they expect the the survey to result in people demanding an unclean and unhealthy environment? Amazingly this view was shared by older and younger Canberrans! But apparently not those of the same age?

Why do I get the feeling that despite this the next 20 years will still be dominated remote suburban greenfield developments and a public transport system that fails to serve as anything other than a social service for those who can’t drive.

“I’ll make it a true daily double Alex.” “What is, will never be done in a millions years?” “Correct that takes you to $1450, pick again”

Jp Romano - 47 minutes ago
Margaret Welsh you’re wrong. Shadow me your facts. View
Scott Lang - 3 hours ago
Allan AJ , perhaps you are right. But I'd be looking for something at half that price. Unlike the older generation, I have to... View
Scott Lang - 3 hours ago
I agree, Keiran. There are better designs out there, but our building industry's collective greed (and the apathy/incompetenc... View
Lifestyle 40

Phạm Quới-Chi - 13 hours ago
We spotted not just one , but three black cockatoos in Isabella Plains 😍 View
David Ironside - 16 hours ago
Tracey Ironside yes there a few around Fadden recently View
Sandy Gibbs - 16 hours ago
Kathy Little Suzy Obsivac these are the ones we saw on our walk today. Timely article!... View
Opinion 1

Jeremy Calero - 20 hours ago
Kaitlyn nothing will stop it lol View
O L - 22 hours ago
Wonder what that means for rental longer term? Probably go up after covid to match increase in housing values View
Community 12

O L - 22 hours ago
Great, that means little to no federal funding coming our way View
Annie Mills - 22 hours ago
Ben Winkler I have a sneaking suspicion that people in the bushfire affected areas are so desperate for the help they have be... View
Craig Griffiths - 24 hours ago
I've become convinced over the years that tabloid media have a psychological code in the messages they put out during electio... View
show more show less
*Results are based on activity within last 7 days

Overdevelopment in Canberra is shaping up to be a key election issue after it was revealed that the lion's share...
Lifestyle 40