Titanic at the ANU Arts Centre, a review 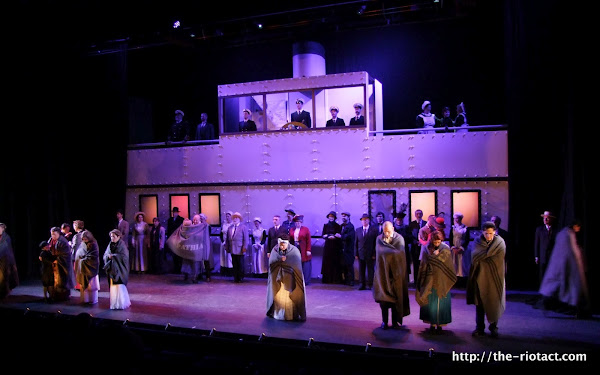 Sunday is the 100th anniversary of the sinking of the Titanic, and thanks to Supa Productions reviving the musical even a hyperlocal website can write about it.

I was fortunate enough to be invited to the dress rehearsal. Dress rehearsals are a mixed blessing, depending on how the production went they can be a bit raw, one can’t be too critical, and there’s no buzz of the crowd.

On the other hand one can take pictures of the show. If you’re any sort of photographer that’s a very compelling argument between the sets, the light, and the very pretty people it’s a target rich environment with some fun challenges to work around. To the point Friday night’s dress rehearsal had a camera club in attendance.

Not the worst thing that occurred in the 20th century by a long shot. But it happened in a slow news year (by the standards of a century with two trans-global conflicts and 4 odd decades of bi-polar standoff), and many of the victims were from the best English and American families so newspapers of the day paid attention.

It also helps when the (then) biggest ship in the world, proclaimed unsinkable, goes down by the bows on its maiden voyage.

Throw in one of the biggest movies of all time in relatively recent currency and everyone’s paying attention.

But it does make for an odd musical.

Let’s face it most musicals these days are about other people working in theatre. Not massive kilodeath maritime catastrophes.

Therefore there is less dancing than one would normally expect in a musical.

And a lot more parts for old men than are customary.

While the music is excellent throughout it’s somewhat light on the killer tune.

But having gotten that out of the way the positives:

The cast is, old men aside, gorgeous and talented. (Old men are talented and appropriately rugged it should be noted).

The set is epic and works beautifully, the band is great, the singing superb.

I particularly liked what they did with the lighting. Check out the way they used shadows of the cast to multiply the sense of a crowd. 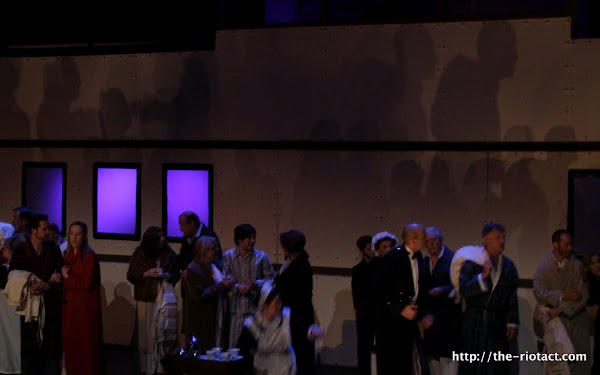 As you’d expect from a depiction of the tail end of the gilded age there’s some serious bling on display: 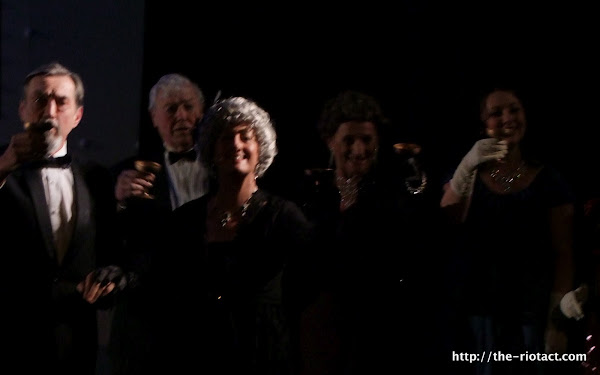 The costumes are just stunning throughout.

Titanic is a tale about the birth of modernity as we currently understand it, and that’s been an awkward, occasionally murderous thing.

The first act sets the scene and frankly drags a bit.

But the real tale takes off after the ship interfaces with the iceberg, which engages the whole of the second act. So rest assured the story is going to take off.

Lacking the budget of James Cameron there are some slightly odd moments where the action has to be described by the characters rather than shown.

But the bottom line is that if you like musical theatre this is a very well put together show.

Mix it up with Teatro Vivaldi serving up the same menu as enjoyed by the passengers of the Titanic and you’ve got yourself a pretty awesome date night.

You can book online, it’s on until 5 May at the ANU Arts Centre.

Here’s a slideshow of my better efforts from the evening. 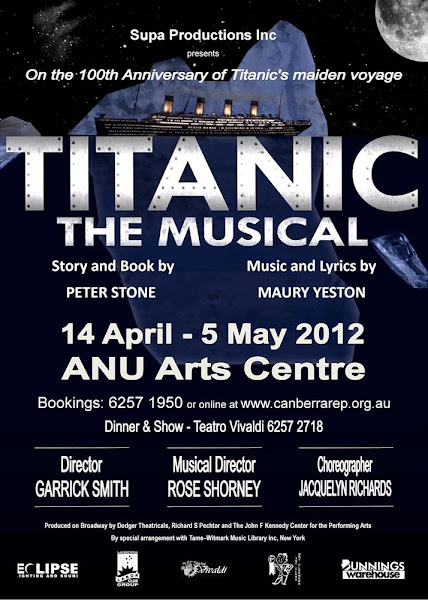 2 Responses to Titanic at the ANU Arts Centre, a review
Filter
Showing only Website comments

I don’t know about you lot. And I might be out on a limb here what with all this Titanic fever over the anniversary date of its tragic sinking that caused the death of over one and a half thousand passengers and crew. It seems to me that a lot of people, companies etc are making a mint out of other peoples tragedies here.
Am I the only one feeling this?

I do have a difficult time with the idea of a musical about a disaster. Can’t see one called 9/11 in 100 years, but the Titanic is about nature hitting back at our arrogance, so perhaps it’s timely? It’s a bit like Oedipus too (there’s no escaping fate); but there the problematic item was Mum, and here it’s an iceberg. Both a bit of a dampener though.

Hint to those treating it as a romantic event; don’t opt for the third class menu. It may be nice food but it sounds pretty awful as a choice. Unless you’re into steerage.

Thanks for the photos; it looks like quite an ambitious production.

Ric Hingee - 13 minutes ago
Two separate issues. Once Labor was elected of course it could go ahead with the tram. However, that does not mean it was the... View
Julie Macklin - 9 hours ago
Unfortunately I would have to keep my petrol car too, as electric cars can't go where I want to drive. Good for urban areas,... View
Brent Hutch - 9 hours ago
Even 200,000 cars at a discounted price of 40k per car, will be 8billion. Obviously this number will increase as more cars ar... View
ACT Election 22

Darron Marks - 32 minutes ago
The increased spending to duplicate some of our arterial roads has made a difference you are correct. But to say there wasn't... View
Evan Hawke - 11 hours ago
Glory Hammer I totally agree that every area needs politicians who fight for there areas. Most of the politicians in my area... View
Vicki Herbert - 11 hours ago
Glory Hammer haha. Hadn't noticed but will be on the lookout now. View
ACT Election 11

Keith Cheetham - 13 hours ago
Pork barreling at its best as Labor does. And then dont initialise it. View
Bronwyn Wilson - 18 hours ago
Where are e teacher librarians going to come from? There are very, very few in the ACT - that’s why so many schools don’t... View
Pam Wood - 21 hours ago
Another rort in progress View
Lifestyle 9

Lisa Norrie - 20 hours ago
Small minded people with sfa to do maybe take up a hobby get a full time job focus on your family there’s millions of thing... View
Toni Higgins - 1 day ago
Shame facebook cant b used for good only instead people like to b nasty and put people down all the time.wonder if they would... View
Property 8

Paroksh Datta Prasad - 24 hours ago
Adam Burzynski I called it in 2013 hehe View
Adam Burzynski - 24 hours ago
Paroksh it has begun.... View
Scott Humphries - 2 days ago
"Braddon of the south" . So the light industry and commercial businesses will eventually be pushed out by apartments, just as... View
News 14

Jim Jim - 1 day ago
Balanced journalism Ian, neither political party are doing that fantastic a job and deserve your devotion. Be critical of bot... View
News 7

Jess Peil - 1 day ago
This is so exciting! View
Roland De Saxe - 2 days ago
Great idea for Eden area View
Talla Mc Bogan - 2 days ago
happened in the otways ,, mountain bikes took the moto tracks ,, they only use a small area though ,, so plenty of moto track... View
Opinion 32

One day a week of free early learning for three-year-olds and 400 more teachers and support staff for ACT public...
News 36

The ACT is on track to have more light rail elections than routes after the Canberra Liberals committed to conducting...
ACT Election 22

Development is always going to be a controversial topic in Canberra. We love our planned city, and each new building...
News 14

The Canberra Liberals appear to have backed away from their commitment last month to stop the approved West Basin lake...
ACT Election 11

@The_RiotACT @The_RiotACT
The prospect of October's ACT election leaves Zoya Patel feeling cold and cynical. The prospect of more of the same fills her with dread. Is she alone in her democratic depression? Is there reason to be excited about the election? https://t.co/Ob72dBpYkO (44 minutes ago)

@The_RiotACT @The_RiotACT
From the reggae-infused sound of CBR trio Kopasetic through to the raucous punk rock of The Dirty Sunflowers, this week’s #GigGuide has something for everyone https://t.co/rHIqQWMMVn (9 hours ago)

@The_RiotACT @The_RiotACT
There’s a new food van on the block in Belconnen and it packs a ton of nostalgia & amazing Sri Lankan flavours https://t.co/aOH5vJ6z8f (11 hours ago)