Todd Carney has done it again… 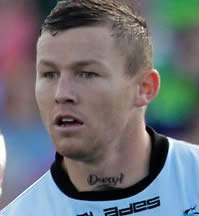 Todd Carney has been caught up in yet another scandal. This time a photo was posted overnight that showed the troubled Cronulla star urinating in his own mouth.

Reports are circulating that the Cronulla board have just acted to the news which has been sweeping social media all morning. Carney has been reportedly sacked.

A search on RiotACT using the phrase ‘Todd Carney‘ brings up a list of his indiscretions over the years.

UPDATE – 5.33pm
A statement has been issued by the Cronulla Sharks CEO Steve Noyce confirming that Todd Carney’s contract has been terminated with immediate effect. 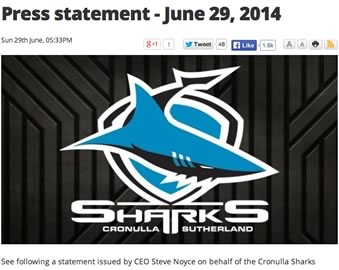 UPDATE: @Cronulla_Sharks CEO Steve Noyce is denying reports that Todd Carney has been sacked by the club. Watch this space.

UPDATE: @Cronulla_Sharks CEO Steve Noyce is denying reports that Todd Carney has been sacked by the club. Watch this space.

This would be a terrible shame for Carney who had a blinder of a game on Friday night against the Broncos. I was thinking then “this lad has turned the corner at last”.

I still remember a video of a chimpanzee doing the same thing at a zoo. And it was just as funny then too!

The golden boy both on and off the field….

The man is a moron.

I don’t see the big deal. It is quite obvious he got stung by a jellyfish on the tongue and was practising the appropriate first aid

What a total d$#khead. The guy just doesn’t get it.

UPDATE: @Cronulla_Sharks CEO Steve Noyce has confirmed that Todd Carney has been sacked from the club.

Seriously, how can he ever walk into an Australian pub ever again?

I wonder how long before this act is renamed “the carny” and replicated at the moose by like minded dunderheads.

A disclaimer first. I don’t know Todd Carney, I’m not a shrink and I don’t give the patootie of a rat about rugby league.
There’s no question that some of his reported indiscretions have been examples of what no adult, or well-behaved child, should ever do. No sane and sober person would want to be in the same postcode as Todd Carney in full cry.
But, I have to ask, why does he do this stuff? I have previously held to an “entitled child” theory – he has been a remarkably talented rugby league player from a young age, paid amounts beyond the dreams of most people, so he’s never been told that he should not do anything he wants to do. It’s an easy pop-psych answer.
This latest event has made me question that characterisation and come up with something a touch more disturbing. When he unleashes the inner ratbag, one of two things happen. Either he’s forgiven (“that’s just the way Todd is”, “you have to accept the Hyde with the Jekyll” etc) and gets the warmth of being loved despite himself or he gets the equivalent of a public beating and humiliation. Getting sacked from one NRL team seems hard (unless it’s the Raiders and the player is manoeuvring to be sacked so he can got to the Roosters or the Sharks) but getting sacked from three suggests that that kind of rejection is what he’s looking for at some level.
In other words, he wants to be punished, and frankly, that’s not a sign of a really healthy mind. Get him to one of the funny doctors, please, someone. Just in case.

I never thought I would link to this YouTube footage in a serious, adult conversation. And yet, here we are. I think it highlights some interesting (but not unexpected) parallels between NRL players and primates: https://www.youtube.com/watch?v=fs-hxI_wLSI

Well he did rise to the occasion…

haha, I don’t think they make a mint strong enough for that.

Dolores Bicket - 7 hours ago
Where can we drop off the blue milk lids? View
Food & Wine 30

Sarah Fox - 9 hours ago
Zalan Filip we will have to check it out! View
Zalan Filip - 19 hours ago
Sarah Fox the one Soph was going on about... reminds me a bit of the huge market thing in Castlemaine. View
Angela Doyle - 20 hours ago
Jacinta Elliott yes please! View
Opinion 108

Jose Black - 19 hours ago
The ACT Greens have a major policy on supporting the community sector (including youth and mental health services) and giving... View
Ghanaian Aussies - 1 day ago
Tom Munro Bullying someone who identifies differently to them is what I am talking about. This is not a fair go for all. So i... View
catder - 1 day ago
Bethany Williams your post exposes you as a hypocrite that knows nothing. We know there are members of the Libs who are conse... View
Property 35

Cheryl Paku - 2 days ago
Congrats Comms@Work! Great to work alongside some of your amazing employees! View
show more show less
*Results are based on activity within last 7 days

@The_RiotACT @The_RiotACT
The Federal Government's First Home Super Saver scheme is a great way for young people to get ahead by saving money through salary sacrificing into their super fund https://t.co/RqV6VDtwBD (56 minutes ago)

@The_RiotACT @The_RiotACT
The bushfire season begins in the Southern Tablelands on Thursday and experts say recent vegetation growth could be a challenge https://t.co/7Gq5UnQzNk (2 hours ago)

@The_RiotACT @The_RiotACT
The ALP's been in charge for almost 20 years but health has remained a constant sore point for successive Labor governments. Why? https://t.co/aGuaozRh3c (4 hours ago)