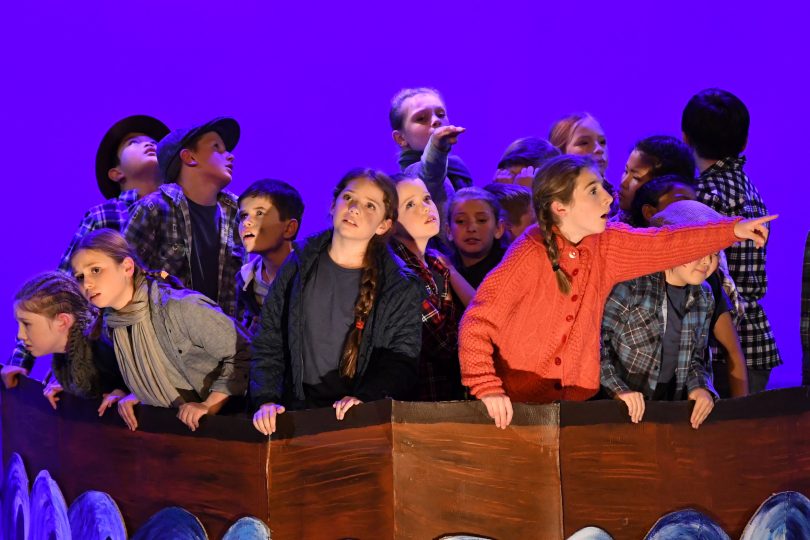 Torrens Primary School is celebrating a national award in the 2018 Wakakirri Story Dance Challenge for its thought-provoking entry on the plight of asylum seekers.

The school took out the National Social Media & News Category Award for Seeking Freedom, with the Wakakirri National Panel describing the performance as “a deeply moving and topical example of sensitive and well researched and devised storytelling” and “powerfully poetic and inspired”.

Year 5 teacher Sarah Nicholas said an inspiration for the performance was an Angela May George’s picture book Out, which tells the story of a little girl fleeing her homeland, making a long and treacherous boat journey with her mother to seek asylum in Australia.

She said the teachers involved in Wakakirri thought it would be a good topic for a performance and “good for the kids to understand how the world works”.

“We thought carefully about how to portray the story and it really was just about the kids being aware of the circumstances of other children, and that not everyone has a life as good as theirs,” Ms Nicholas said.

“We were very cognisant of the fact that it was something you have to approach carefully.”

All the feedback had been positive, including from refugee families at the school.

“We actually have some refugee students at the school and one took part in Wakakirri this year. They felt positive about the way it was approached and portrayed,” Ms Nicholas said.

Ms Nicholas said it was an emotional performance from the students who responded strongly to the themes.

“I think they got a sense of what it must be like to be frightened – the chase scene, the music, it brings out a lot of emotion,” she said. “Our performance was very emotive, and the children felt that as much as the people watching, that come across for the audience. That’s why people liked it so much.”

Torrens Primary has a strong Wakakirri record, figuring prominently among the awards in recent years.

It helps to have three teachers with a passion for dance – Colleen Lawless, Emma Thomas, and Yasmin Edgerley – who devised the choreography.

“We’re very lucky to have all that talent at our fingertips,” Ms Nicholas said. “We tend to do well each year and the kids love it. It’s very much a community environment at the school. Wakakirri is driven as much by the parent community as it is by the teaching community and the kids.”

Last August schools from across the ACT performed over three nights at the Canberra Theatre, with six, including Torrens Primary, going on to perform at the ACT Region Awards Night in September. The national awards were announced last week.

Wakakirri is Australia’s largest performing arts event for primary and secondary schools. This year saw 240 schools hit the stage at 40 events at professional theatres around the country.