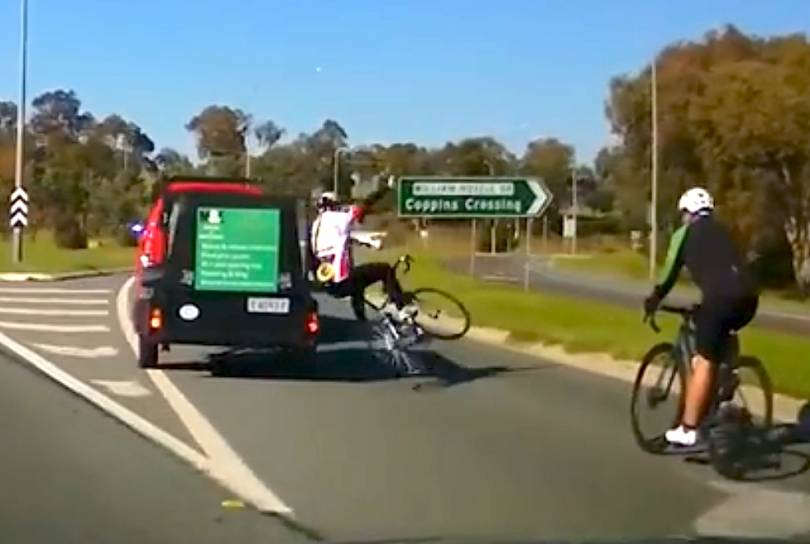 A dashcam image of the cyclist hit by a passing motorist in October 2020 first prompted calls for stricter punishments for motorists. Photo: Screenshot.

Advocates for cyclists have welcomed new laws which passed the Assembly this week that allow police to issue motorists with strict, on-the-spot fines for negligent driving, riding and scooting.

Drivers who injure cyclists or any other vulnerable road users will now face fines of up to $900, while drink-riding offences for e-scooter riders have also been introduced in a bid to make the scheme safer before it expands across the city.

Pedal Power ACT chief executive Ian Ross welcomed the changes, which he hoped would encourage drivers to take more care on the road around cyclists.

“Where someone drives negligently and harms another person, there must be clear and immediate penalties,” Mr Ross said.

He also welcomed a significant education campaign which the ACT Government will begin rolling out later this month, saying it is important Canberra drivers are aware of the new rules.

The Share the Road campaign will be highly visible in public spaces, including on buses, at petrol stations and in shopping centres.

In late 2020, there was public outcry after a dashcam image of a cyclist getting hit by a passing motorist was circulated online, and it was later revealed the driver had been issued with what many, including Pedal Power, saw as a “grossly inadequate fine” of only $393.

ACT Greens spokesperson for active travel Jo Clay, who had moved the amendment to incorporate higher fines into the government’s bill, said strong measures were needed to improve road safety.

“Fines for negligent driving that harm someone are part of a range of measures that can address safety concerns and encourage more Canberrans to walk, ride or scoot,” she said.

“It seeks to capture harm that is serious but not necessarily permanent – like major bruising, black eyes and lacerations. These types of harm are most often experienced by vulnerable road users like pedestrians and cyclists when other road users don’t take enough care,” Mr Steel said.

The bill also introduces higher automatic licence disqualification periods for several driving offences that result in serious harm or death and new offences such as not taking reasonable care and attention when driving or riding.

Mr Steel said it was hoped the new laws would help all Canberrans to both feel and be safe on the roads.

“That’s why we have strengthened the range of offences and penalties for unsafe behaviour that puts other road users at risk – particularly those who don’t have the protection of a car around them,” he said.

Police will also be given new powers to direct a person to get off, or not get on, devices like e-scooters and bikes, as well as penalties if these directions are ignored.

“In preparing for the city-wide roll-out of shared e-scooters, we’ve heard that Canberrans want a clearer framework to guide good behaviour and encourage considerate sharing of the road when people are using these devices,” Mr Steel explained.

“All of us have a role to play in working towards Vision Zero: no deaths or serious injuries on Canberra’s roads.”

Since 1971 I have taken the line that unless bicycles are registered, and the riders obey the same road rules as licenced drivers and receive the same penalties if they ignore the road rules, they have NO right to be on the road.
To clarify this; in 1971 (when the give way to the right rule was enforced) travelling south on Wattle Street Lyneham at the intersection of Macarthur Avenue I had a GREEN light which I proceeded through. A bicycle rider travelling east on Macarthur Avenue thought it was ok to go through the RED light and hit the drivers side door on my car.
The police were called and I was charged with failing to give way to the right and negligent driving. With the exception of one speeding fine for going 5 kph over the limit this is the only driving offence I’ve received since 1971.
Three weeks after this incident the rider who hit my car, turns out he was a high level public servant, was a passenger in the back of a Commonwealth car laughing and joking with another passenger how he went through a red light and was able to convince the police to have me charged, unknown to him the driver of the Commonwealth car was a family member.
BICYCLES should not have any rights on a public road unless licenced and registered, just like every other human being. I want an explanation as to why they have rights to a public road, unregistered and unlicenced to ride as recklessly as they wish, with no ability to track or trace the rider.

Can someone explain who has the right of way in this situation:

I am driving to an intersection controlled by traffic lights in a 60 zone. There is a marked bicycle lane on the left and about 100 metres from the intersection I pass a bike so, as I slow for the red lights, I make a mental note to watch out for the cyclist at the lights because I intend to make a left turn and I indicate accordingly.

I got it wrong because she is already mobile milliseconds after the light goes green and tries to squeeze past me to go straight ahead. I stop instantly to avoid a collision and she abuses me before heading off.

One has to be a mind reader.

Fair question. I read here:
https://www.bikesa.asn.au/laws-regulations/the-law-regarding-cyclists-and-left-turning-drivers/
that a bicycle must give way when you are indicating and turning left, but may pass when you are indicating and moving forwards to turn left. That sounds to me like a recipe for damaging people through marginal decisions. I hope courts have clarified that to say that the frontmost vehicle ordinarily comes under the first part, the second or an approaching vehicle under the second part. That would be sensible behaviour by the actors.
I did not find a ready answer to whether you are permitted to occupy a bicycle lane at the point (and signalled intention) of turning left if you are the frontmost vehicle. It would be safer and no inconvenience to someone who would have to give way to the vehicle anyway.
There is a general rule that one should act cautiously even with apparent right of way, equally applicable to anyone on the road.

Thanks for that phydeaux.

There is also the rule about motorists keeping a distance of 1.5 metres (I think) from cyclists but in this case she placed herself only half a metre from my car when I was stationery.

Where is Petal Power when you need them?

If only bikes were required to have rego plates……

What a great use of taxpayer’s money that would be…….

Those on bikes assumed that those in cars never made mistakes before cyclists came onto the road. Now they want to be on the roads and not have any basic training, the whole impetus of safety relies on the car driver. Keep 1 meter away etc.

The numerous rules on bikes means that car users would falsely believe that if they follow all the rules they would be safe from issues. As if you follow all the road rules and someone else does the wrong thing in a car then they are at fault.

Now we have the emphasis on car drivers need to do the right thing and also be aware that cyclists may act in unusual behaviors and we must accept that, any fault is the car driver in all circumstances.

Give it a rest mate.
‘…not have any basic training…’
No cyclist is getting on the road unless they are very experienced or have a death wish. Why because the road is full of Daily Telegraph reading bogans in utes who are egged on to throw stuff, drive as close as possible at 80kmh or worse.
‘…cyclists may act in unusual behaviours…’
Any road user may do something unusual. Car drivers are far more likely to do it but because you haven’t been trained into ‘us v them’ thinking in relation to car drivers you don’t notice it. For you, car drivers are normal – sure some of them do crazy stuff but you accept they belong on the road. You need to accept bikes are normal, acceptable road users too.

Waste of time. Drivers who interact with cyclists would only do it once anyway. They wouldn’t even be aware of the penalties.

Yes drivers should take care around cyclists but looking at the photo the trailer is already over to the left as much as he can. Then on the right hands Side of the photograph is a bike path. How about joint responsibility on some occasions.

So for you it’s okay for a car to drive over a white line from the left and slam into a bike.
The driver is over at the left because he came from the left over the white line.
https://youtu.be/oFexFlQVsSs

Please make sure you know the details before making comments.

That’s not a bike path, it’s the northbound traffic lane on Coulter Drive.

What about enforcing the existing laws that require road users to not unreasonably obstruct other traffic, or to stop at red lights – neither of which seem to apply to cyclists. Any cyclist paying attention will draw very little comfort from the increased fines because as many Canberra road users know: it doesn’t matter how much the fine is if there is negligible chance of actually being fined, as the ACT Government works towards its Vision Zero: no active police presence on Canberra’s roads.