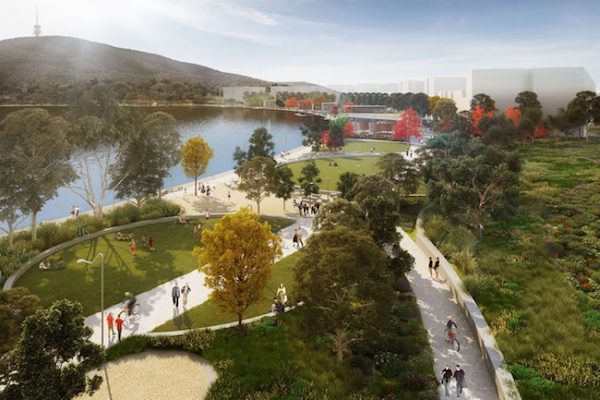 The road under Commonwealth Avenue Bridge between West Basin and Commonwealth Park will be closed from Monday, June 19 until Friday, September 8 this year to allow for the construction of a new public park.

Diversions will be set up to ensure continuous access to both Commonwealth Park and West Basin parking areas during the temporary closure of Barrine Drive, which will allow work to begin on a waterfront park next to Commonwealth Avenue Bridge at the southern headland of West Basin.

LDA City to the Lake Director Nicholas Holt acknowledged the diversions would present an inconvenience to some visitors to the area during the construction period.

“But the delivery of a waterfront park, along with the new public boardwalk in West Basin, will create a fantastic new public space where Canberrans and visitors to enjoy Lake Burley Griffin,” he said.

Drivers wanting to access or exit these areas in the opposite direction will need to turn around at Vernon Circle to the north or via the Flynn Drive off-ramp at the southern end of Commonwealth Avenue Bridge.

Pedestrians and cyclists will be able to use the signalised Commonwealth Avenue crossing.

These diversions will be in place both day and night.

Detour signage and barriers will be in place to alert motorists and pedestrians to the closure and direct them to the diversions.

Pictured above is an artist’s impression of Point Park, West Basin. Photo: LDA

“Pedestrians and cyclists will be able to use the signalised Commonwealth Avenue crossing. “

I wonder whether it’ll have a shorter delay. Otherwise people will push the button and find a gap in traffic before the lights change.

They’re right, it will be an inconvenience, but I’m really looking forward to the development of West Basin. As the saying goes, you can’t make an omelette without breaking a few eggs.

Should be an underpass . No?

Marc Edwards - 9 hours ago
Maybe the Berra Party View
Paul Leins - 9 hours ago
Sure, just bet a former liberal will be a real check to his mates in the liberal party 🙄 View
Michael Ilsley - 9 hours ago
Glad to see him engaged in the community after the tragic loss of his son. View
Community 52

Ian Lindgren - 11 hours ago
These comments by the The ACT Minister for Industrial Relations and Workplace Safety Mick Gentleman mean that it’s time all... View
Kevin Hodder - 13 hours ago
How about a crack down on government agencies waisting tax payer funds, View
Property 35