Trained to lead, Michael Mahy is a natural team builder 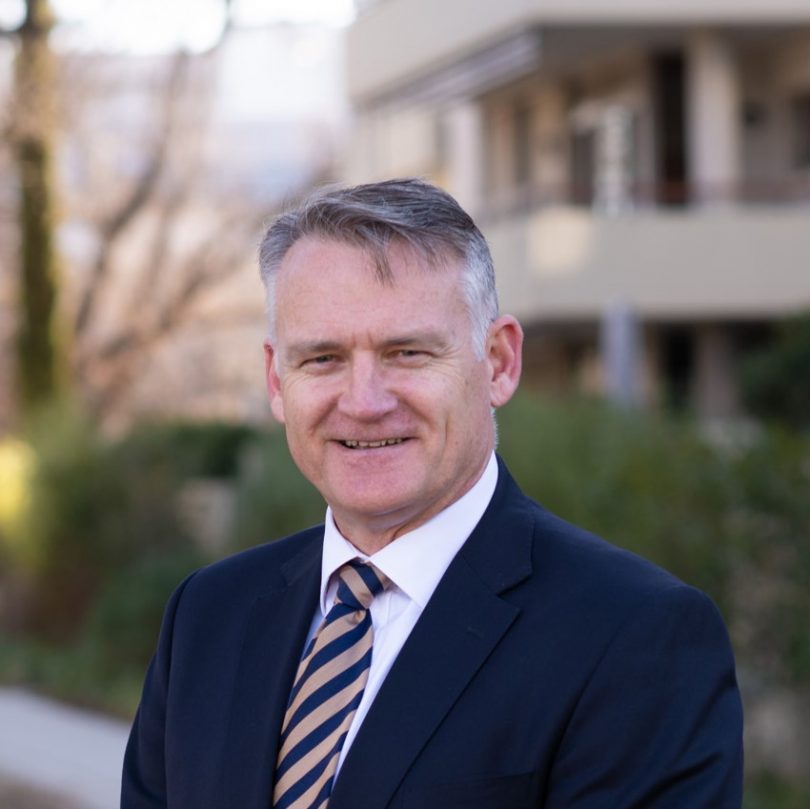 Michael Mahy stepped in to the civilian world joining Synergy Group as an Executive Director in 2018. Photo: Supplied.

After a military career spanning three decades, Michael Mahy stepped in to the civilian world joining Synergy Group as an Executive Director in 2018. The well-respected Brigadier and ex-Director of Military Strategy had decided the time was right for a change. Little did he know his skills honed in the Army would assist one of Canberra’s leading professional services firms to adapt and deal with the challenges of a global pandemic.

Michael credits his early years as an officer serving in infantry battalions as the foundation for leadership roles that were to come.

“In Defence, working in teams and groups becomes second nature. I had a lot of responsibility as a young man. I was put in a position where I had to organise and lead platoons of soldiers the same age or older than me and be responsible for them 24/7.

“I had a wide variety of jobs over my military career and they all required me to work to build strong teams in changeable and challenging circumstances. Strong relationships built on mutual respect are key, particularly when you rely so heavily on each other to keep things moving in the right direction in dangerous and sometimes lethal circumstances,” Michael explained.

After more than 30 years, Michael said leaving the military was a big decision.

“I knew there was going to be a transition period. You get very used to Army life and the way Defence operates. Everyone’s rank and operational experience is worn on their uniform. So is their specialisation, making it easy to figure out who’s who quickly, which certainly isn’t the case in business. My wife and children had also become used to Army life; in reality, our children didn’t know anything else. To be honest, I just wasn’t sure how and where I would fit into the commercial world.

“I was at a crossroads, I was too young to retire but not sure where to next. I also needed to give something back to my family for their years of patience and worry while I was away training or on exercise, and on operations,” Michael said.

A meeting with local Canberra firm, Synergy inspired him to make the leap.

Synergy Group is a leading provider of professional services and solutions to Federal and Territory governments and commercial clients.

CEO Galia Cornish says Synergy is a leading competitive alternative to many of the international accounting and consulting firms.

“Synergy has a strong people-focused culture. That was a big positive for me. I could see that Defence needed a hand and Synergy’s priorities were solving problems and bringing out the best in people.”

“Synergy brings together multidisciplinary teams to help with complicated and complex situations, collaborating with different groups of people. That type of operational environment is what I am used to, building teams tailored to specific solutions. The bigger the problem the happier we are.”

With the outbreak of COVID-19 and the subsequent nationwide shutdown, Michael saw an opportunity and offered to lead an internal task force to help the group deal with the enormous challenges and changes of COVID-19.

“It was apparent early on that we needed an internal working group to guide our operations through the stages of the pandemic. Anxiety was understandably high. People were worried about the economy, their employment and their children and we knew that our staff needed to be across all the changes. Providing certainty to staff meant people could get on with their work and their lives.”

The taskforce introduced a new decision-making cycle, supported by business analytics completed by Synergy’s in-house expertise. Twice daily stand ups and twice-weekly partner level meetings were supported by staff engagement across the firm to bring everyone up to date with insights on government responses and their implications.

Michael said the taskforce has helped people with directions on where they could work and how to work safely, with practical advice on the best way to look after themselves.

“The whole firm leaned in to help make things work. It made a huge difference and gave us great confidence moving forward.

“Our leaders played a vital role by empowering staff in challenging circumstances. I am pleased to say everyone has been receptive and there has been a magnificent response. It has been satisfying to watch everyone work together so well.”

Although it was over a comparatively short period of time it was a pleasure to work with you Mick.

I hear so much positive information about Synergy, sounds like a really good company that actually values its people.

Jizzy Martin - 31 minutes ago
Our Lady of the Most Holy Rosary bet you'd complain if a Muslim was preaching Sharia law. This is the same thing circumstance... View
Opinion 67

Callum Bowen - 34 minutes ago
Completely agree with Simon. For years now we’ve turned a blind eye to thousands of annual flu deaths (and who knows from h... View
Marc Edwards - 3 hours ago
Simon Trommestad yet until the caught COVID in most cases there pre existing conditions where being managed. So yes Covid act... View
Margaret Freemantle - 4 hours ago
Simon Trommestad I reject deaths- very very sad to lose a 39 year old friend from Covid. View
Business 8

Michael A Avis - 2 hours ago
I lost my job and can’t get any financial help for any Governments, due to my wife having a job in childcare. View
Joel Symmans - 5 hours ago
Peter Hislop the feds got enough AZ vaccine for the nation. It's the anti vax smear campaign that people bought into and then... View
News 54

Claire Cat - 2 hours ago
Jo Hann I agree wholeheartedly X and it's for those reasons our family has chosen to opt out of distance learning and focus o... View
Jo Hann - 2 hours ago
Claire Cat at 6 years old, learning should be entirely play based. In the best performing countries in the world (with regard... View
Food & Wine 10

Feedback - 6 hours ago
This article from two days ago in the riot act - further explains this last point https://the-riotact.com/how-is-the-covid-19... View
Feedback - 6 hours ago
There are a couple of issues with your point. - Medical experts have already spoken, see Canberra Times article, and the Dept... View
enjayjay - 7 hours ago
Or how about we let the medical experts and educators announce a plan when it’s determined to be safe as safe as possible i... View
News 46

chewy14 - 6 hours ago
Astro, I asked for the evidence that Stage 2 of Light Rail was necessary and where the need has been proven from "Government... View
Business 27

Pat Kelly - 7 hours ago
Thanks for your great times we all had,30 years of it,you guys go and enjoy life,many thanks.your most welcome to call in to... View
show more show less
*Results are based on activity within last 7 days

We all love our dogs, right? And we want them to look their best. But with a busy schedule, sometimes...
Business 109

There have been plenty of promises and a lot of money thrown around, but electric vehicle (EV) charging stations in...
Opinion 67

UPDATED 3:00 pm: Year 12 students have been given the green light to return to school at the start of Term...
News 46

@The_RiotACT @The_RiotACT
Looking for something to stimulate your brain during #lockdown? There are many online short courses available, from bird appreciation and understanding wine, to a free salary negotiation course from @Harvard https://t.co/8KRfOvage4 (3 hours ago)