An artist’s impression from the Works Approval application of the proposed temporary car park at the Australian War Memorial.

Sixty-three trees will go from the grounds of the Australian War Memorial in Campbell under a proposed car park extension to support the $500 million redevelopment of the national institution.

The AWM has lodged its first Works Approval application with the National Capital Authority connected with the controversial nine-year expansion.

The project site is towards the southern corner of the Memorial grounds, known as the Eastern Precinct, to the north of Fairbairn Avenue.

The AWM proposes to extend the visitors basement car park near Poppy’s Cafe and build a temporary car park on top for construction workers to use during the overall redevelopment.

The temporary car park will later be landscaped, with grass and eucalypts planted to replicate the heritage values of the Eastern Precinct, the planning report prepared by Purdon Planning says.

It says the site has been selected because of its low impact on surrounding suburbs, with the temporary car park to be screened from view by existing trees on the south-east corner of the Memorial grounds.

The visitors car park extension will provide 123 spaces, while the workers’ car park will have 115.

“Once redevelopment works have been completed the temporary car parking area will be transformed to an open landscaped area consistent with existing heritage values, available for visitors of the Memorial and users of Poppy’s Café,” the planning report says. 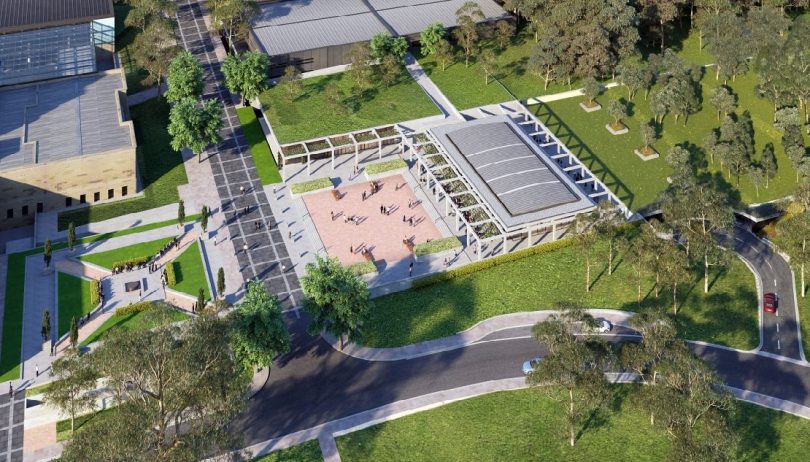 The AWM project site after landscaping.

A heritage assessment found there would be minor and moderate adverse impacts on heritage values related to trees, the Memorial grounds themselves and the Parliamentary Vista.

As a result, the Memorial adjusted the extent of excavation work to minimise the number of trees removed, and management measures will be implemented to ensure the health of the retained trees is maintained.

The planning report says the affected trees are recent plantings and only one remnant eucalypt had been identified, and the Memorial has purposely positioned the car park to ensure its retention.

It also directed the project engineer to make changes to the structural capacity of the car park to allow greater soil depth for future plantings of mature trees, which the planning report says will mean more natives will be planted over the site.

This addressed concerns from the Architects Moral Rights owners about the proposed landscaping not being in keeping with the current precinct.

The ecological impact assessment found there were no triggers within the study area for a referral under the Environment Protection and Biodiversity Conservation Act and that there was no evidence of endangered habitat values or species of flora or fauna on the site.

The future landscaped area will be subject to a separate Works Approval application.

Toned Abs, at the ready, with his chainsaw.

Just move that collection to a war museum already. Get it out of the War Memorial.

We shouldn’t be celebrating the machines of death and destruction in the place we are supposed to be remembering the waste of life. We sent people to their deaths because a few men couldn’t check their egoes. It doesn’t matter how amazing the killing machines were.

I hope these suits don’t have to live through the type of conflict they are so excited about. But if they don’t learn from the past we are clearly doomed to repeat it.

Lucas Graydon - 5 minutes ago
Hugh Gregory all the more reason for it not to be simplistic. View
Josh Rawson - 44 minutes ago
If by social credit system you mean the system utilised by some major Europeans nations so a billionaire doesnt get a $200 fi... View
Hugh Gregory - 54 minutes ago
Lucas Graydon it never has applied to the truly rich, but by reducing fines for lower income earners we would only spread the... View
News 13

Jesse Peter - 11 minutes ago
but seriously here's some actual historical evidence of how we used lockdowns, social distancing and masks to get the 1968-9... View
Jesse Peter - 15 minutes ago
yeah i remember my great grandmother telling me how she worked from home via the internet 🤪 View
Jody Maree Harrison - 19 minutes ago
Govty paying us again ? View
Food & Wine 3

Brianna - 38 minutes ago
Who is going to be delegated to give these tests and collect the data? View
Opinion 41

Monica Tiffen - 45 minutes ago
☘️Love to see him smile! View
Earthdog - 2 hours ago
The simple answer if you find his behaviour boorish and clownlike is to not watch him. I have restricted my watching sports/... View
Opinion 78

Simon Cobcroft - 51 minutes ago
You sir, are wrong. I have the misfortune of attending two Wiggles concerts AND a Cockroaches concert. Although, my son must... View
Roderick Saunders - 1 hour ago
Gulf Mike I'd rather not be reminded of Pretty Fly for a White Guy View
Nicholas Feeney - 2 hours ago
2006 - #5 I don’t feel like dancin / scissor sisters. The beginning of the end for the hottest 100 but was the end for me.... View
Lifestyle 5