Troy Williams’ efforts to get publicity for his run for the seat of Fraser know few bounds, he’s even ponied up cash to buy advertising space on this very website. (soon to run out Troy, want a renewal?)

Jon Stanhope is seriously unimpressed with reports that Troy Williams stickers are turning up “on traffic signs all over Gungahlin and north Canberra”.

“The fact that his Liberal Party colleagues are now defacing taxpayersâ€™ property with stickers authorised and printed by Liberal Party President Gary Kent shows that no one in the ACT Liberal Party listens to Mr Stefaniak.

“Itâ€™s time Mr Stefaniak showed some leadership and made his Liberal colleagues remove these illegal stickers, and forced Mr Williams to be disendorsed as the Liberal Candidate,” Mr Stanhope said.

I can’t say I’ve noticed them in my travels but if someone wants to send me some co-ordinates I’ll get out there with the camera and add a photo.

UPDATED: The damn things really are all over the place once you start looking. Here’s two I noticed once I got out with the camera: 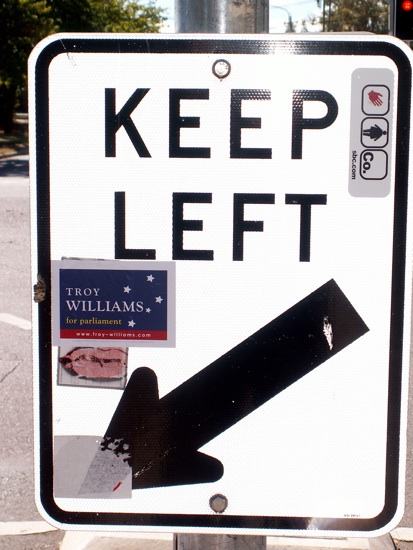 Hmm, looks like he’s not the first into this space with the charming Smack Big Chicks folk already there.

But where there’s room we get more: 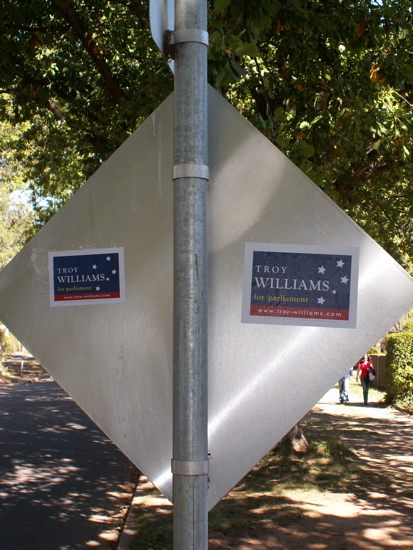 Hey Troy
Is there anyway you can get your campaign volunteers to attack the graffiti out at Ngunnawal while they’re on their travels, seeming Stanhopeless can’t find the $200,000 a year to remove it anymore.
You’ll be able to find it all as soon as you enter Ngunnawal as its starting to look like the Bronx.

As someone noted, Stanhope isn’t jumping up and down at WorkChoices and Free David Hicks stickers everywhere.

Troy – seems your taking responsibility has worked well. I don’t live in your electorate, but best of luck.

I laugh whenever I see the union stickers and posters around the place, because it reminds me of just how outdated and irrelevant to modern Australia the union movement really is. I used to be a union delegate once, which is how I learnt to hate them.

You mean if I print up a couple of hundred stickers saying that Stanhope is great and should be elected, and plaster them around the city (well worth the $ for a box of laser printer labels) – I can get somebody sacked.

Hope everyone had a safe and enjoyable Easter break.

Organising some of our campaign volunteers to take the stickers down won’t be a problem as not having put the stickers up myself, nor having asked that they appear, it is a straight-forward request. Simply, it’s the right thing to do.

Stanhope, that bastion of preserving the integrity of public buildings, signs, etc.

Bruford did you say?

How about a comment from Troy?
-We know you read this site, stand up and be counted.

above….below….left….right
it all makes a difference

Don’t know about the rest of you, but with advertising of this standard he deserves my vote.

Keep it up Troy, who knows maybe these stickers is what is needed to get that 9.4% swing. Thats only an extra 20,000 odd votes. You go for it.

Since I cannot read these traffic signs now, I take no responsibility for either speeding, turning or parking when I shouldn’t, going wrong way up one-way streets etc.

-I shall forward all my traffic fines to Mr Williams.

I think that Stanhope is being a hypocrite! He allows those bright orange ‘Your Choices At Work’ posters to be up on light posts all over the territory, yet he is telling Mr Williams off for stickers… nothing should be put on road signs, by the Chief Minister needs to practice what he preaches… and considering that the Labor Party has been caught graffiting and also littering light posts with posters shouldn’t Stanhope step aside – there is a whole host of other reasons as well!

down with all the posters plastered everywhere for band gigs!!!

williams doesnt need to make the point about this being a ‘storm in a teacup’ coz u just did for him.

sure the guy needs to exercise a little more control over those helping him, but ever thought that he might actually be telling the truth??? probably a lot of people volunteer for campaigns and not everybody is a drone, no doubt some have their own way of doing things even if its not proper. chucking stickers everywere was always going to be dodgy so bit hard to see a candidate sanctioning it.

CG, he had his mobile no on the bottom of the leaflet so I rang it – easy. I also got the line that he didn’t do it and couldn’t control what his minions did. (Works for Howard, so why not Troy?) That was last December though, so looks like not much has changed.
(Cue thundering response from Troy, telling us this is all a storm in a teacup while Kevin Rudd is planning to sell us out to the unions, etc.)

My gf was agro bout this and sent an sms to Troy. He said called something like that ‘though he didnt do it he would to the right thing and take care of it’. Is this a first, a politican taking some responsibility?

What’s Stanhope ever taken responsibility for? With the fires he blamed the fire service, the public servants, the fone company and more recently a judge and a priest. Its about time he bought a mirror, and looked for who’s responsible.

The problem with a candidate isn’t getting to speak to them, it’s getting them to stop talking.

i got that letter too. all it said was something about McMullan not standing up when schools all across his electorate were closed down. dude, you are as full of cr@p as McMullan, Stanhope, Williams and the rest.

I’m amazed that you called and got through to williams tho!!!! When was the last time anyone actually SPOKE to a mp, mla or candidate?

Karan Campbell-Davis - 2 hours ago
That's right, build more of those ugly, high density dog boxes, just like Sydney! 🙄 View
William Coats - 10 hours ago
what impact will further development in the Sullivans Creek catchment have on future flooding in Oconner and Lyneham. These a... View
Community 5

Donna Ainge - 9 hours ago
Hi Julie-Anne. Where in O’Connor did you live? Hakea Cres by any chance? View
Dot Willcoxson - 12 hours ago
Suzanne Huntley Doug has posted a comment further down. The neighbour he refers to was Frank Machutta who lived across the ro... View
Doug Willcoxson - 13 hours ago
A neighbour of ours in Pearce was on his way home that night and was behind the cars that were washed away. He was passed the... View
News 13

@The_RiotACT @The_RiotACT
The ACT is expanding vaccine storage facilities at the Canberra Hospital in preparation for the arrival of the Pfizer COVID-19 vaccine https://t.co/sJOTHW08De (13 hours ago)