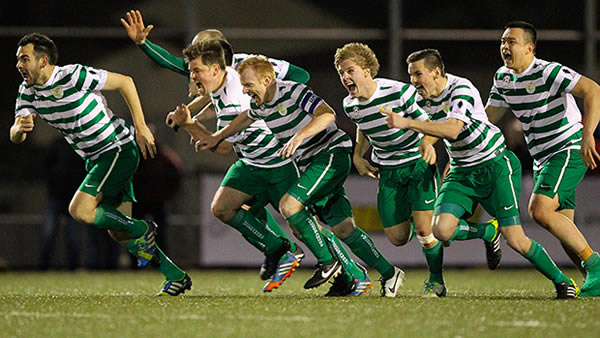 It was against all odds, and that’s what made it so special.

Tuggeranong United’s thrilling penalty shoot-out victory over South Hobart FC at KGV Park last night was a result few punters had predicted would unfold on the second night of the FFA Cup’s round of 32.

The clash had been billed as a mismatch between a Tasmanian titan and a minnow from the nation’s capital, with the highly-fancied hosts expected to encounter little difficulty en route to securing its place in the round of 16.

But the predicted whitewash didn’t materialise.

Instead, after 120 minutes of football had failed to separate the two sides, Tuggeranong goalkeeper Rohan Shepherd denied Caleb Ludlow with a stunning save and Harry Pettit coolly slammed home the winning penalty to send Canberra’s sole representative through to the FFA Cup’s round of 16.

Some would say Tuggeranong was lucky, but before escaping via the penalty shoot-out, United had played with verve and flair to not just match its opponent, but get the better of it for large periods of the enthralling encounter.

United played free-flowing and entertaining football, and the Steve Forshaw-coached side, although in its infancy, took it to South Hobart from the outset.

United talisman Matt Mensor led the visitor’s attack with conviction as Tuggeranong created chance after chance. It was only fitting that the first real opportunity of the match fell to Menser, who found himself one-on-one with South Hobart goalkeeper Mark Moncur in the 11th minute, only to be denied by an impressive save.

Daniel Colbertaldo and Jon Toole also came close to adding their names to the score card, but both failed to convert their chances before half-time.

South Hobart had ample opportunities in front of goal, too, in the first-half, but Tuggeranong was equally as impressive without the ball as it was when in possession. Defender Sean Kiddey was particularly solid at the back, while Shepherd pulled off a number of fine saves to ensure the sides entered half-time locked at 0-0.

The complexion of the second-half was similar to that of the first, as both sides enjoyed a share of possession and created opportunities in front of goal.

Shepherd was called into action a number of times as South Hobart pushed for the opening goal, but there was little the Tuggeranong ‘keeper could do in the 69th minute when Kiddey inadvertently clipped the ball into his own net after failing to deal with a dangerous ball into the box.

Tuggeranong refused to lie down, however, and stood tall in the face of adversity as it went in search of an equaliser. It didn’t go unrewarded in its quest either.

Substitute Zachary Munster restored parity five minutes from time when he met Kiddey’s long throw into the box and sent a looping header over Moncur.

Extra-time followed, and Tuggeranong, buoyed by its late equaliser, dominated and was unlucky not to go ahead when Muad Zed’s long-range effort crashed off the crossbar and bounced narrowly in front of the goal-line.

But with extra-time unable to separate the pair, a penalty shoot-out was required and Tuggeranong defied the odds to progress through to the FFA Cup’s round of 16 in stunning fashion.

this is a nice, neutral, piece on the match.

Viking Park seems to be the likely venue if United has a home fixture.

Viking Park seems to be the likely venue if United has a home fixture.

Tuggeranong can now expect a Round 16 match against an A-League opponent, on either 16th or 23rd September, at a yet to be decided venue.

Great result Tuggies. Perhaps it will be Melbourne Victory who head to Kambah 2 and we see the return of Carl Valeri?