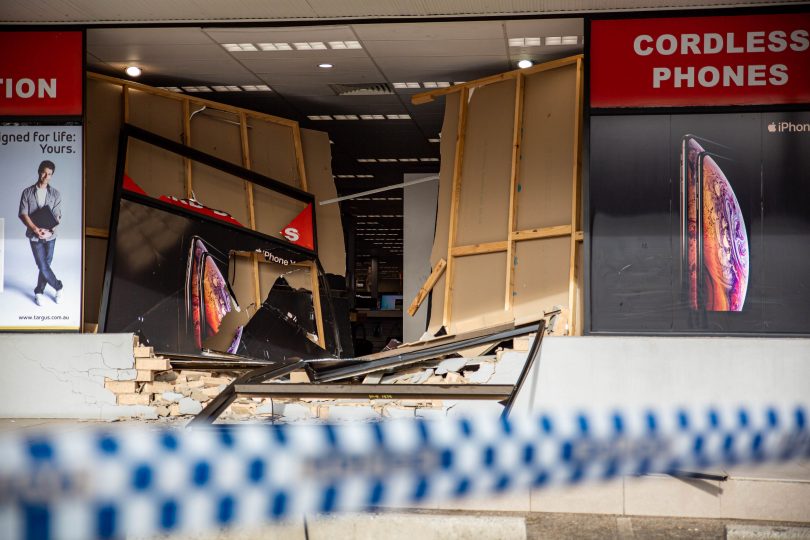 Two men will face court on Tuesday morning (30 July) following the ram raid at Harvey Norman in Fyshwick in the early hours of yesterday morning.

Around 3:55 am, police responded to reports of a ram raid on the corner of Ipswich and Barrier Street Fyshwick, where the building had sustained significant damage and an amount of property was stolen.

Following an investigation by the Criminal Investigations team, officers arrested a 37-year-old man in Coombs, charged with trespass and attempting to drive a motor vehicle without consent.

A 38-year-old Lyons man was also arrested, charged with aggravated burglary and theft.

The men will face the ACT Magistrate’s Court today where police will oppose bail.

Anyone with any information about the burglaries, or who may have dash-cam or other footage from the areas around the time of the incidents, is asked to contact Crime Stoppers on 1800 333 000, or via the Crime Stoppers ACT website.

Deb Crisp - 35 seconds ago
So super proud of my sister starting the Gordon Park rock spotting with my daughter's the first week of lockdown... 5 weeks l... View
Karenne Eccles - 21 minutes ago
This i has been happening in Kiama also ... View
Sam Da Cruz - 1 hour ago
India Elise this why you were painting rocks yesterday??? 😂 View
Opinion 89

Julia Ross - 3 minutes ago
As long as it's in warmer weather. The June long weekend was just too cold for spectators and drivers. View
Shawnee-Rae Hulm - 28 minutes ago
Noss Hulm I remember that Dad View
Tom Short - 31 minutes ago
Alison Lamb It would be more like nascar View
Lifestyle 30

Kay Pearce - 17 minutes ago
Helen Kook thats just what Grandma (Mrs Prowse) would do!!... View
Helen Kook - 2 hours ago
Knowing my grandmother it would have been an easy walk back in those days View
News 22

The promise of better light rail access to the Mitchell business hub is now a reality with services commencing on...
Community 44