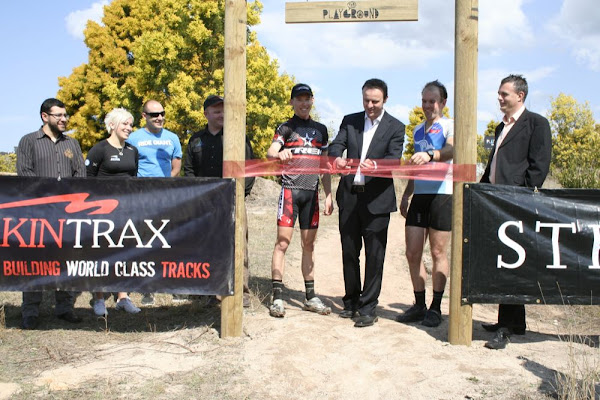 Andrew Barr has announced he’s opened the new “The Playground” series of tracks at Stromlo Forest:

The $60,000 Playground is a trail loop using new and existing trails and encompasses a wide range of mountain bike terrain. Features include jumps, drops, technical climbing and technical descending and caters for a range of skill levels. It will include a skills coaching area for clubs which will also serve as a guide for riders who are unsure of their level of ability.

While he was out there he also announced the Gravity Cup and All Mountain Cup will be held at Stromlo as part of the Mountain Bike Australia national series in February 2012.

The events to be held on successive weekends are the:

• Gravity Cup (downhill) on the weekend 4-5 February, and

• All Mountain Cup (cross country) on the weekend 11-12 February.

These events traditionally attract in excess of 300 entrants and up to 3,000 spectators. Additionally we expect these rounds will attract a large national and global audience. 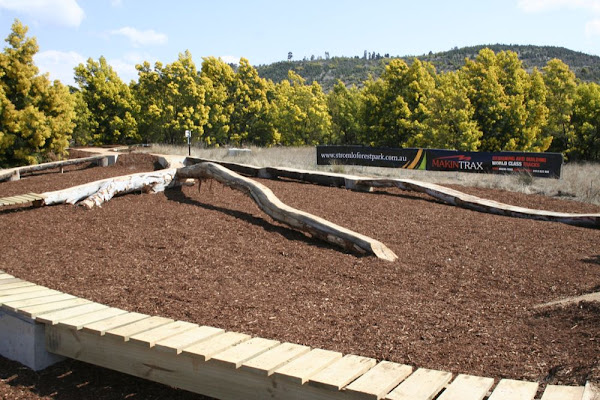 Ooooh, oooh, there is a challenge. Might have to sneak out there this week & have a try.

I want to see minister Barr tackle the downhill track.

Deref - 7 hours ago
It'd be handy to know the vaccination status of those in hospital and the ICU. View
Property 20

Sam Oak - 7 hours ago
Ken, but the other 50% is usually taxed at the highest tax rate of 45%. Add the fact that normally your deposit to buy the ho... View
chewy14 - 13 hours ago
"And that’s exactly my point. The ordinary Australian family is not expected to have financial nous which makes property su... View
Food & Wine 1

Futureproof - 8 hours ago
Vote early, vote often. Will voter ID solve this?... View
kenbehrens - 9 hours ago
Stephen, as it turns out, School ID cards are a thing, if you work in a school you'll need a Working with Vulnerable People's... View
franky22 - 12 hours ago
I take it that the 55 senators are part of the nutjobs still claiming that the election was stolen from Trump ? View
News 2

Frank Spencer - 8 hours ago
Leaf litter makes the best compost. View
TimboinOz - 8 hours ago
Leaf-litter!!! At home? Buy a 2 or 3 layer worm-farm and start gardening. Even if it's just for salads until Autumn. And, eve... View
News 3

Futureproof - 8 hours ago
The roundabout at Monaro Highway/Isabella Drive is particularly dangerous with the height of the grass. You should be able to... View
Capital Retro - 8 hours ago
That would be tantamount to the cosseted cyclists in Canberra who get free bike tracks and then complain that they can't use... View
bigred - 9 hours ago
Of course, both sides of politics could encourage interested and motivated residents to "adopt a patch" and reduce the total... View
News 1

Frank Spencer - 8 hours ago
They need to cater for way more than 500 students. Remember the students from Googong, Bungendore and Karabar that will enrol... View
News 12

Capital Retro - 8 hours ago
Origin are giving 0.17c per kWh on residential solar feed in some NSW regions. If I had 8 solar systems I think I would be cl... View
Capital Retro - 12 hours ago
Organics and renewables are all part of the manufactured "green-think" idealism. Some of these people even put nitrogen in th... View
John Giacon - 12 hours ago
Hi. While ACT prices are rising, they are still cheaper than NSW - though I found it hard to find clear figures on actual pri... View
News 16

Helen Roberts - 9 hours ago
I welcome FOGO in Cook. We are more able to separate food scraps. For example I have found that the coffee capsules we used t... View
Scott Harvey - 9 hours ago
Most people don't buy organically grown fruit and veg therefore the scraps aren't organic either. You cannot add non organic... View
Lifestyle 19

Tom Worthington - 11 hours ago
I was surprised that a generator would be used for the outdoor office. Having been the "Net Traveler", for more than two deca... View
News 3

Fiona Carrick - 12 hours ago
... and the Woden Valley Community Council (volunteers) are organsing music, Christmas Carols and an Arts Market in the Woden... View
show more show less
*Results are based on activity within last 7 days

@the_riotact @The_RiotACT
Expecting guests over summer? Here is a simple recipe for a delicious summery galette that everyone will love https://t.co/7E7RV76Txu (1 hour ago)

@the_riotact @The_RiotACT
Recent rainfall has #LakeGeorge looking pretty full, but is it returning to its former glory? An expert from the ANU believes another wet year in 2022 and we could see water lapping the #FederalHighway like in the 1990s https://t.co/R1TWago0qJ (2 hours ago)

@the_riotact @The_RiotACT
Ghanaian born and Canberra bred singer @genesisowusu has had a massive past week, claiming two Triple J awards and then scooping four ARIA awards on Wednesday night, including Album of the Year https://t.co/kjMabj6smr (3 hours ago)